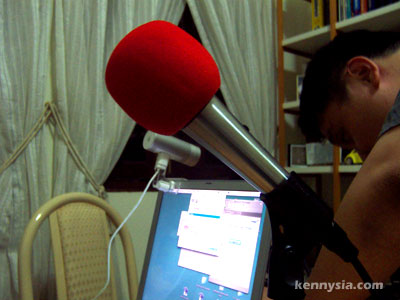 Podcasting is set to revolutionise FM radio the same way MP3 technology revolutionised the music industry. Ever since I acquired the iPod nano, I find myself literally hooked on podcasts and have more or less stopped listening to local radio stations altogether.
I always wonder what goes on behind the scenes at the mrbrown show podcasts. On my last trip to Singapore I was lucky enough to not just appear on the show, but to have the man himself explain to me what went on behind recording and publishing your very own internet radio show. 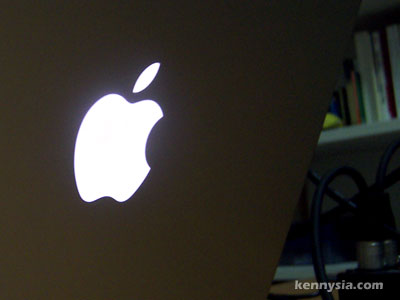 Equipment-wise, the bare minimum you require is a microphone connected to your computer. But Mr Brown is a bit gung-ho about sound quality, so he made some significant investments acquiring two ice cream cone-like microphones (with stands), a DJ-like set of headphones, a flynet-like pop-guard and a mixer deck that looks like it’s gonna explode if I chin chai press any button on it. 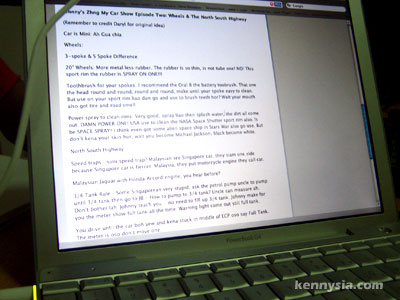 Writeboard – the online collaborative software used to prepare for the mrbrown show podcasts.

Surprisingly, very little work went on behind preparing for the show. Comedy skits like the Zhng My Car series require a bit more work though. For Zhng My Car, Brown and Miyagi would collaborate over Writeboard, where the gist of the script took shape and they can review it individually at work or at home without meeting up face-to-face. 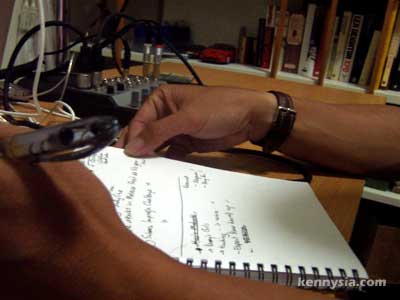 In most cases, Brown and Miyagi simply get together and brainstorm for a few topics an hour before actual recording. Brainstorming was full of laughter and stupid jokes with those two around (check out the video link at the end of this entry). Almost all their shows were done in one take with very little editing effort going into post-production. 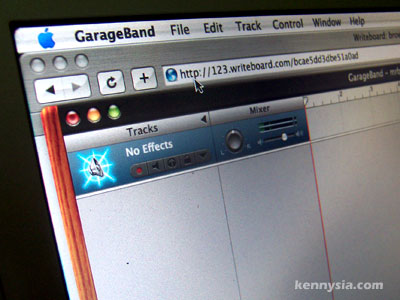 For sound-recording and post-editing, Brown uses Apple Garageband on his iMac G4. Any other sound recording software should work just as fine though.
I was nervous as hell throughout the recording, fumbling my lines in more ways than one. Brown was reassuring to me, “Don’t worryyy! If you mess up we will help you out one!” 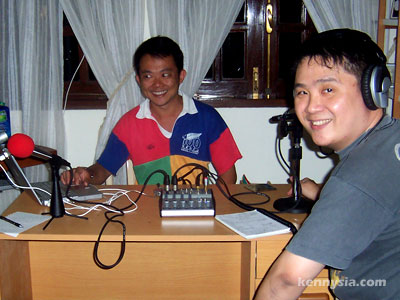 To him, doing an internet radio show is almost his second nature. In fact, as you will see in the video later, the only time he fumbled was when he did the intro and outro of the show.
After recording, all that’s left to be done is save the MP3 file, upload it, then publish it on the World Wide Web. 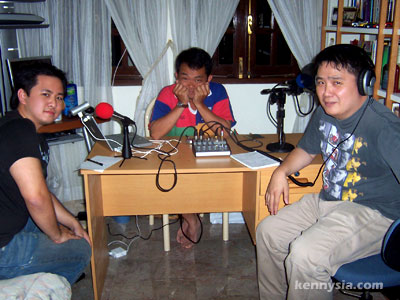 Podcasting is not my niche, but I sure had lots of fun recording the mrbrown show (perhaps more fun than the audience who listened to the podcasts). I totally enjoyed myself and I’m sure they did too.
Thanks again, Brown and Miyagi, for inviting me onto the show!
Download: the mrbrown show Podcast: “Causeway to Kuching” (MP3, 7.2MB, 20m48s)

There’s two more back entries from my Singapore trip. By the time those are published, I’ll be off to KL for another business trip.

30 Replies to “Behind The Scenes At the mrbrown show Podcasts”