Taroko Gorge ??? is the number one must-go destination for any visitor to Taiwan. 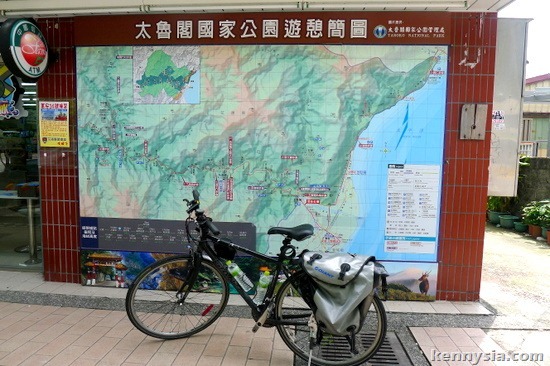 The name "Taroko" means "magnificent and beautiful" in the local Aboriginal language. According to an article I read, a long time ago, an Aborigine climbed into this canyon and upon seeing the beauty, he cried "Taroko!" – and so this became the name of the place.

Funny. That’s the same story I heard about how Singapore got it’s name. 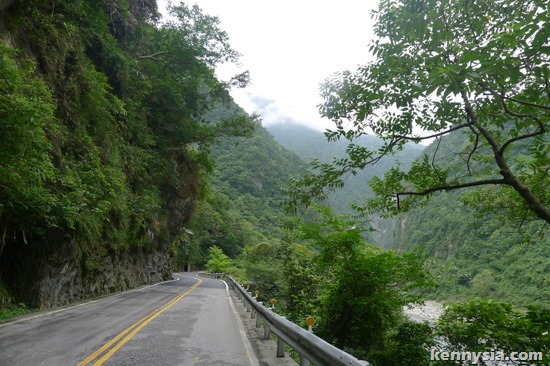 After 2 days and 220km of cycling, I contemplated giving my legs a rest and rent a scooter instead.

Unfortunately, all the rentals here only rent to local Taiwanese. I had no choice but to do the uphill climb on my trusty bike once more. 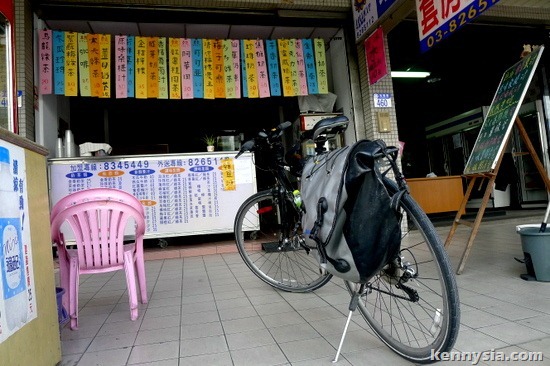 Taroko is located 20km north of Hualien. It is a distance I can comfortably cover within an hour. On a flat road. 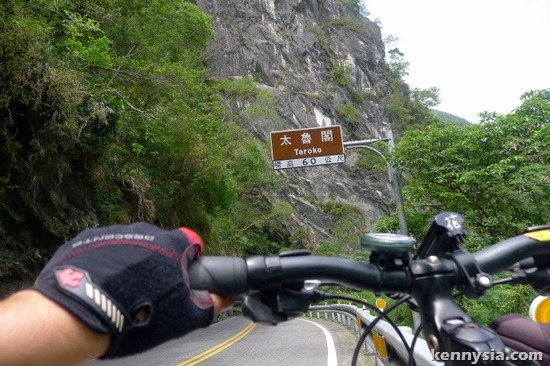 Due to the uphill nature of the terrain, it took me three gruelling hours just to get to the entrance gate of Taroko. It was nothing of course, compared to the rain and cold and darkness I had to battle the night before. The human body adapts, and I see the uphill climb more as an exercise than anything else.

Once I’m inside the Taroko Gorge, it was like entering a completely different world. 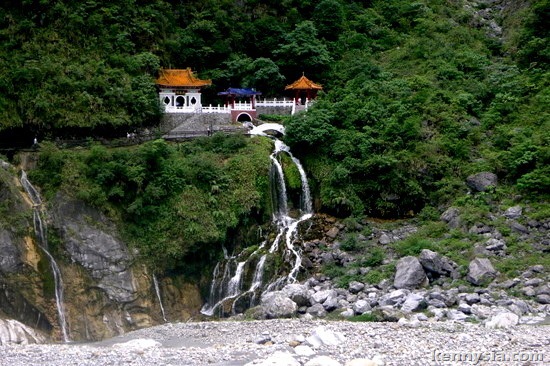 The Shrine of Eternal Spring ???. 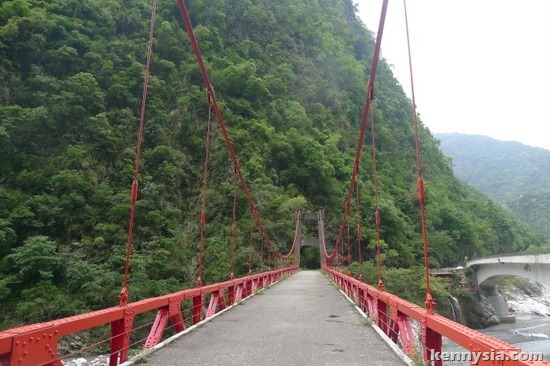 Bridge of the Kind Mother ???. 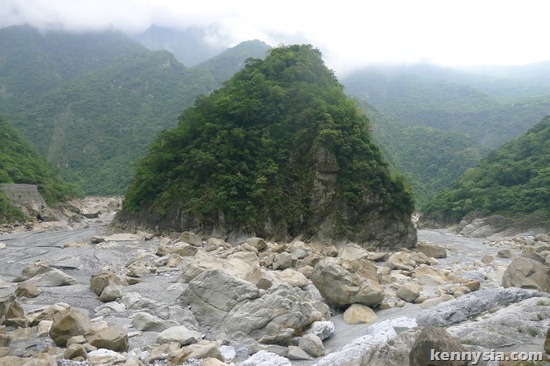 Marble white rocks on the dried-up riverbed, washed and cut by the erosive power of the Liwu river they turn clean and white. Rising above them are granite covered by subtropical rainforests. 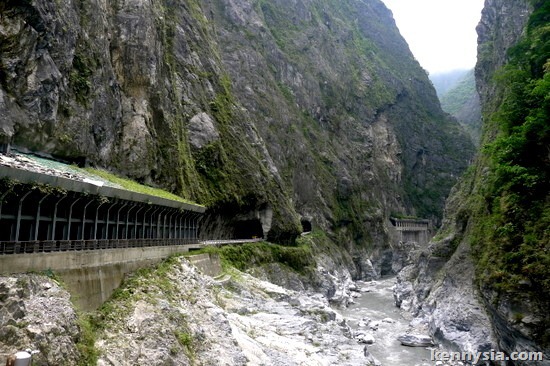 And this is the type of landscape that continue to hug the road for the next 16km uphill. With little traffic, cool temperature and a stunningly majestic scenery to enjoy, Taroko Gorge was my slice of heaven.

As giant tour buses swerve past me, I have the luxury of taking in every detail of the stunning scenery by cycling slowly uphill. 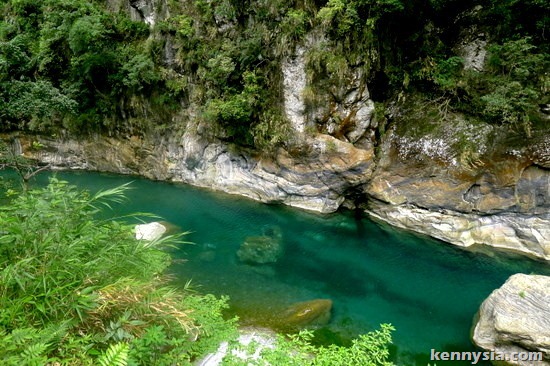 On occasions when I found water in the river, the colour was clear and turquoise. Almost good enough to make me wanna jump in it in my cycling gear. 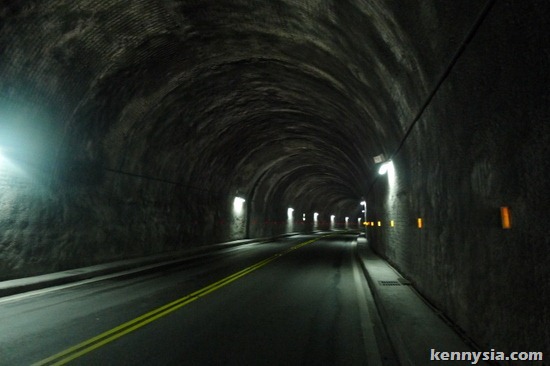 On other occasions when I have to cycle through kilometre-long tunnels alone with my bike, I use the loud music in my earphones to motivate me to spin my wheel as fast as I can see the sunlight. 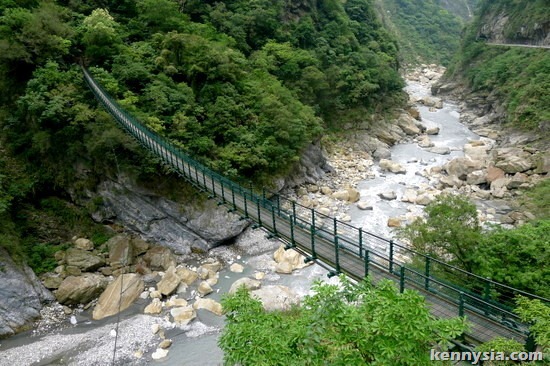 Rockfalls are common in this area, and the authorities regularly close off walking and cycling trails for safety reasons. 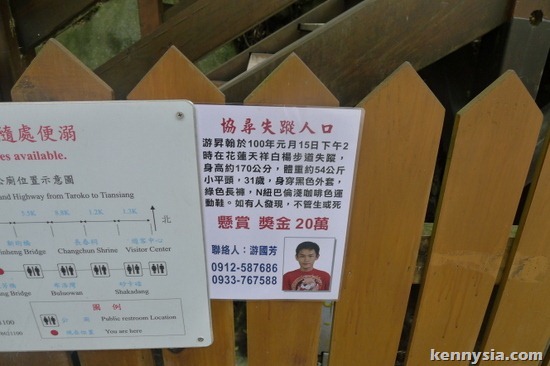 People have gone missing before. With Taroko Gorge being such a large area, it would be almost impossible to get help if anyone were to get lost. 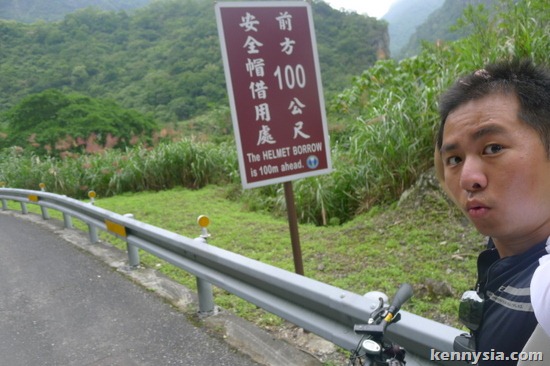 Even being in the area without a helmet can be dangerous. At one point, I was prevented from proceeding any further unless I wear their hard hats. 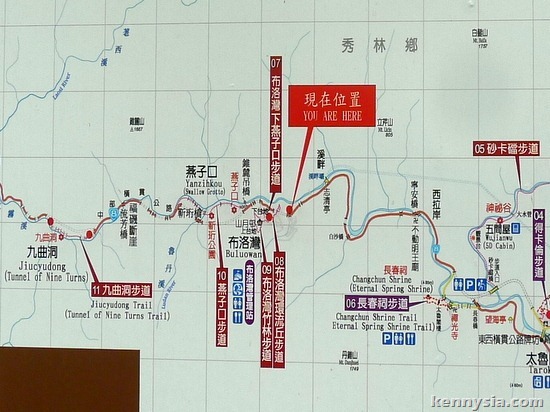 My plan was to visit The Tunnel of Nine Turns ???, the most spectacular of several walking trails. Also the furthers away uphill. 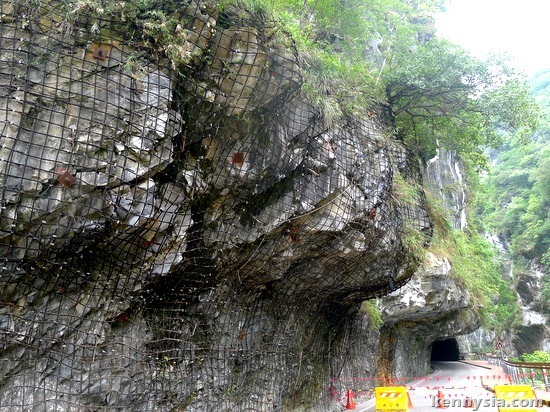 Yet, the further I cycle inland, the more apparent it became that I was never gonna see the top draw of the Taroko Gorge. 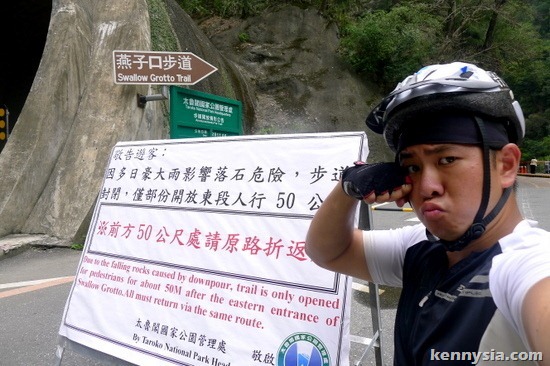 Many of the walking trails surrounding the area were closed due to danger of rockfall.

When I finally did arrive at Tunnel of Nine Turns, I was the only person there – a rare sight for such a top tourist draw. 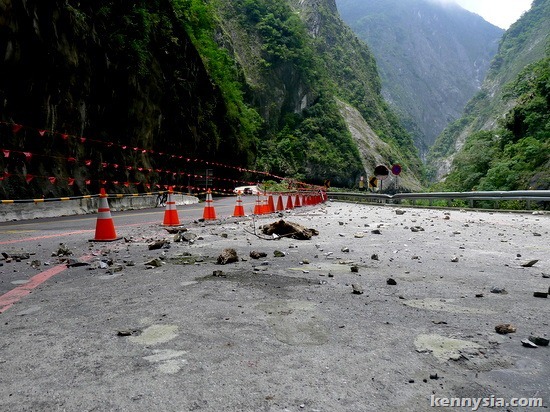 The floor was littered with stones of various sizes. Obviously, nobody is risking their lives to clean up the debris here.

The only glimpse I had of the Tunnel of Nine Turns was this. 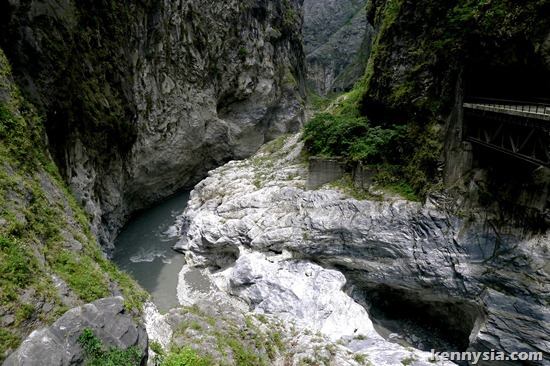 It was quiet. I could shout and the echoes would go on for several seconds.

As expected, the walking trail is closed. And the warnings are severe for those who go against the advice of the authorities. 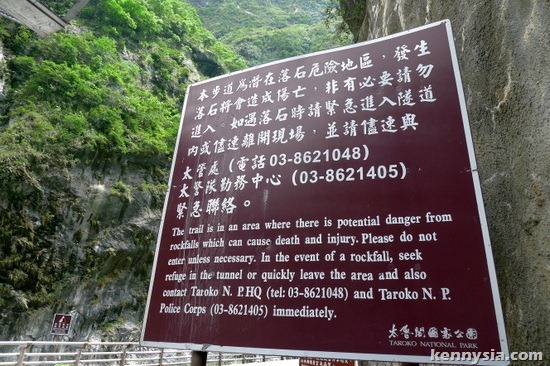 Part of me felt, "Dammit! I did not cycle 220km across the entire East Coast of Taiwan to be stopped by some stupid warning sign."

Honestly, I toyed with the idea of just going down the hiking trail to have a look. 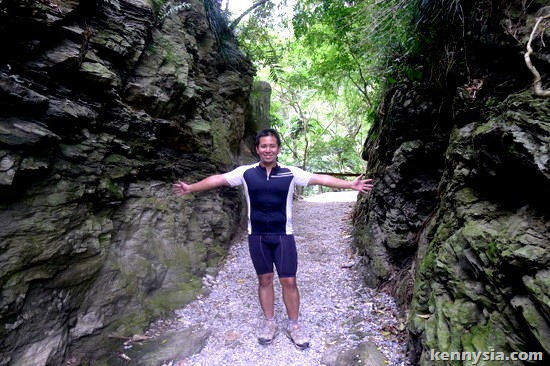 But common sense got the better of me.

Although I was disappointed, it ain’t worth it to risk my life just to look at some scenery. I gotta be accountable for my loved ones back home.

So I did the sensible thing to do – I turned my bike around and proceed to ride downhill all the way back towards Hualien. 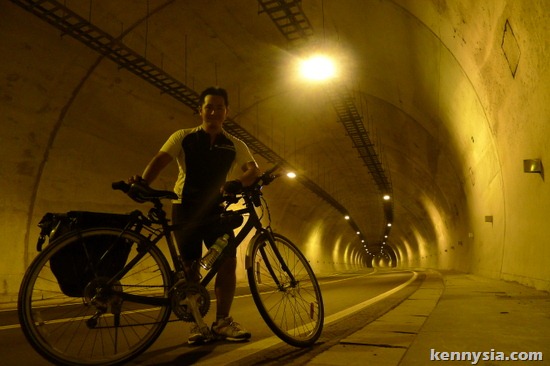 Very quickly, my first every long-distance cycling journey have come to an end. 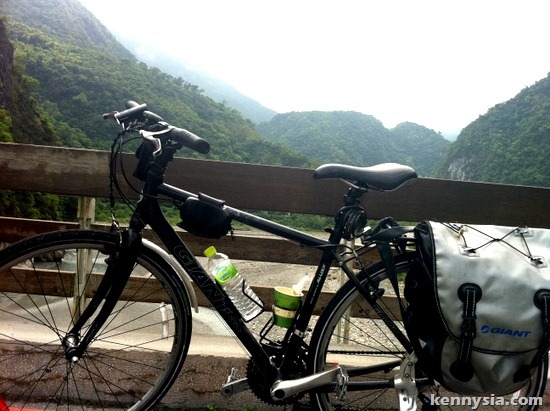 I arrived back at the Giant bike store at Hualien Train Station, ready to return my rental bicycle – which has been my sole companion for the past 60 hours. After cycling so much, somehow it felt weird to walk with my two feet again.

This is gonna sound awfully stupid, but a wave of emotion suddenly washed over me. For a moment, I actually very quite sad that I have to let go of my bike and go back to my old travelling routine of taxis, trains, buses and flights. 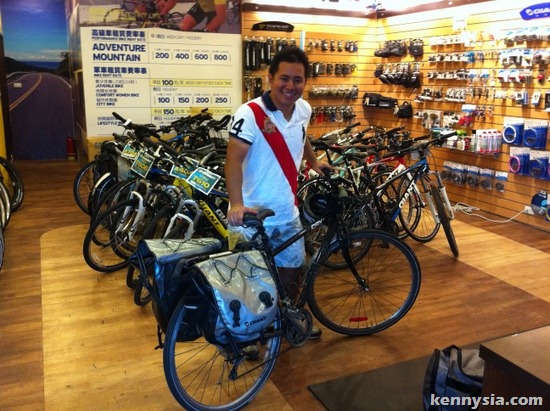 It was almost like breaking up with an ex-girlfriend. Very sad.

One thing I was sure of is that I had a brilliant, enjoyable and very "different" type of travel experience. Seeing Taiwan on two wheels gave me the freedom to explore. It also forces me to slow down and appreciate the finer details of this amazing country better than any other vehicle can.

I missed my bicycle as soon as I left Hualien on the train back to stuffy, overcrowded and over-commercialised Taipei. 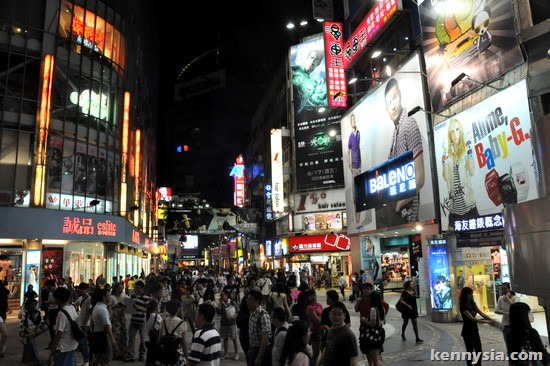 First thing I did when I returned to Kuching… 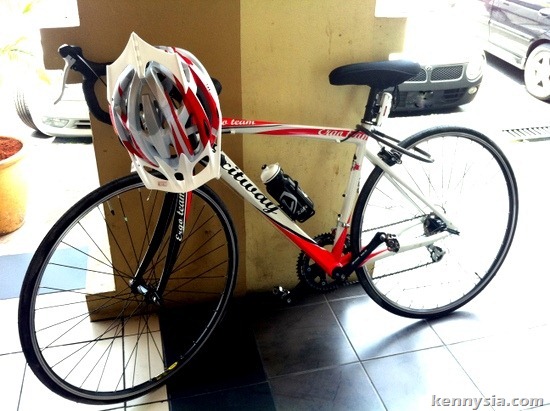 … I went and bought myself a bike.