How the heck do I end up reviewing earphones? 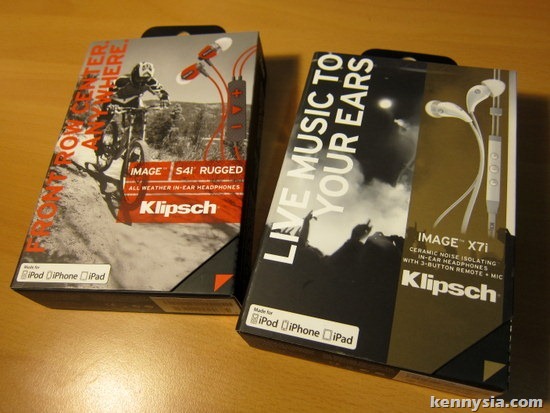 As it turns out, fate has its own funny way figuring into my life.

First things first – let’s put it all out there. I am probably not the best qualified person to review audio products.

I am not an audiophile. I am not a musician. The only thing I am is an average person who believes that music plays a very, very big part of my life. 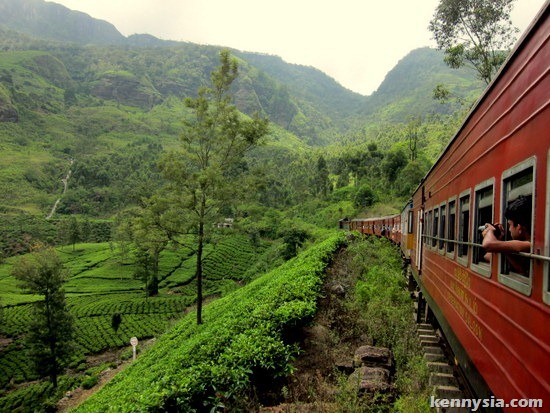 There are two things that I do more than the average person on the streets.

First, I travel a lot.

Friends tell me that I treat the Airbus like a bus. When you’re stuck in a confined space for at least 2 hours each way, pretty much the only entertainment option you’re stuck with is your iPhone and the music that comes out through it. 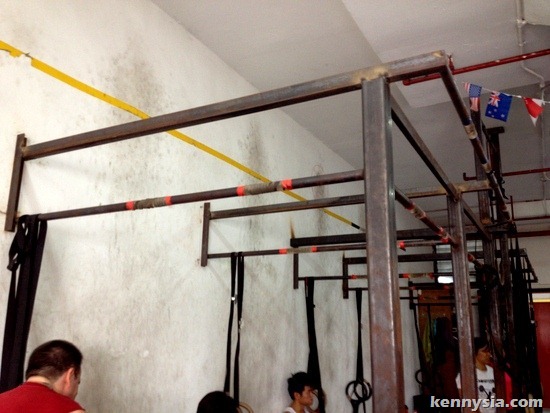 Secondly, I do a lot of fitness stuff.

Weights, cardio, running, cycling, marathons. When you’re pounding the pavement every second day, one hour at a time, the quality of music being pumped into your ears plays a very important role in determining whether you’re gonna hit that personal best or not.

So with my qualifications out of the way, let’s get onto how I ended up with this unit. 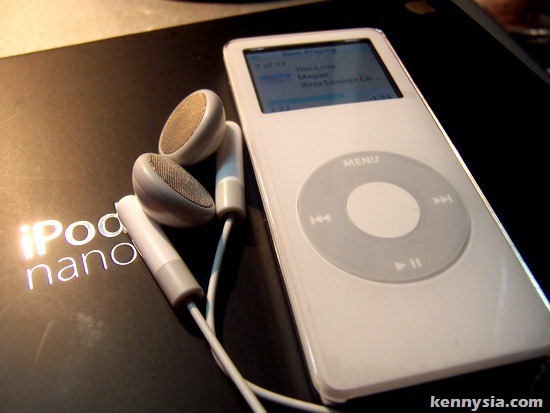 Many, many years ago, when I got my first iPod, I was dissatisfied with the standard earphones that came with the music player. I bought my first high-end earphones – the SHURE E3C – that serves me pretty well for several years, but costs me something pretty close to the RM1,000 mark.

The SHURE came to its death when I decapitated it one day after I accidentally kiap it between my doors. Saddened at my loss, I went to my trusted earphone supplier Jaben, who introduced me to their hottest seller at the time – the Klipsch Image S4. 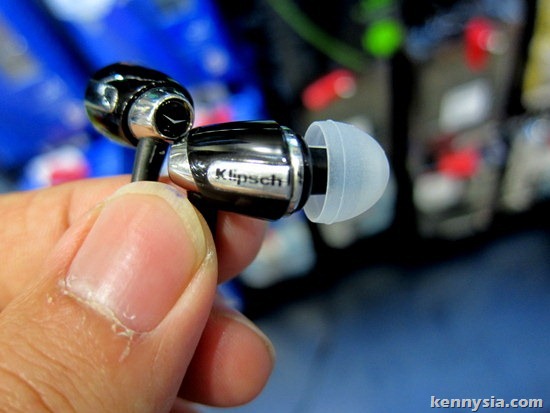 Despite costing only RM359, I was amazed that the Klipsch S4 performs on par with many high-end pairs costing many times as much.

And so begun my love story with all things Klipsch. Instantly, I was converted into a happy customer, taking them around the world with me, including the entire 42km course of my Seoul International Marathon last year. 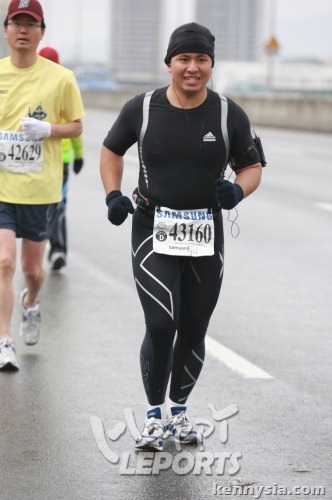 The only thing that sucked about the Klipsch Image S4 was its flimsy little cable that seem to tangle way too easily.

A little over a year after I bought them, my music starts to break when those cables finally gave up on me. Thankfully, the Klipsch S4 came with an exceptional TWO YEAR warranty. 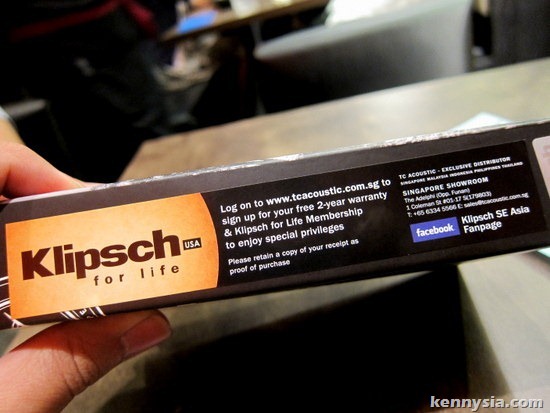 I took them back to Jaben in Singapore, who then re-directed me to Klipsch’s regional distributor Tat Chuan Acoustics at The Adelphi building. And that was when I was introduced to their ridiculously superb warranty policy.

Rather than repairing my existing earphones as most would assume, Tat Chuan offered to replace my Klipsch earphones with a completely brand new boxed unit! 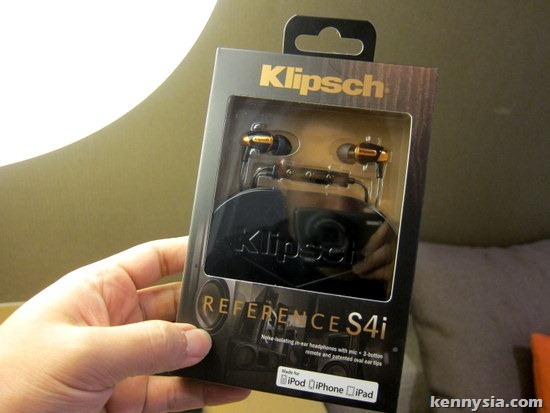 I took the opportunity to upgrade to a Klipsch Reference S4i, which I still love and use until today. But really, Tat Chuan’s replacement policy was THAT simple! No questions asked, and I was in and out literally in mere minutes.

Not knowing that I am already an existing Klipsch customer, Tat Chuan e-mailed me out of the blue to ask if I would like to review their newly released earphones.

At this point, even if they were to ask me to dance around naked with Klipsch earphones wrapped around my body, I would gladly do so. 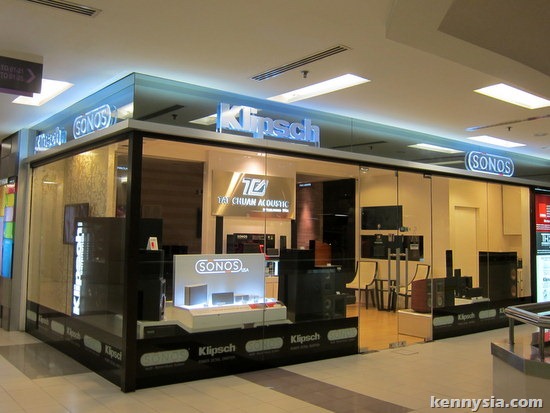 Much to the relief of humanity at large, their request was much milder than that.

I was given review units of their first ceramic earphones – the Klipsch Image X7i, as well as the new Rugged version of their best-selling Klipsch Image S4i for a test drive. 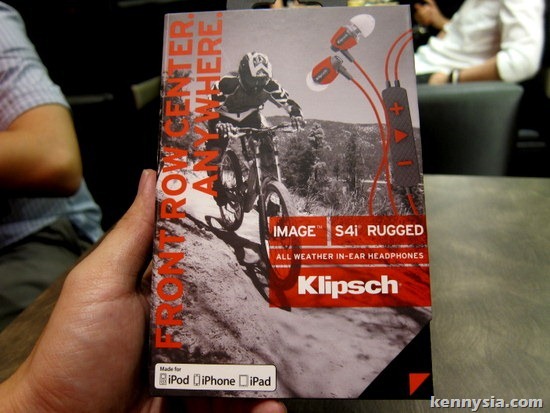 The Klipsch Image S4i Rugged looks as if it was built exactly for my kinda lifestyle.

With a weather-proof design and rubberised coating from the gold-plated plug all the way to the those oval eartips, this set of earphones look as if they’re ready for a boxing match.

The reinforced cables is a welcome improvement over the original. Apart from being more durable, they are also less likely to tangle up. 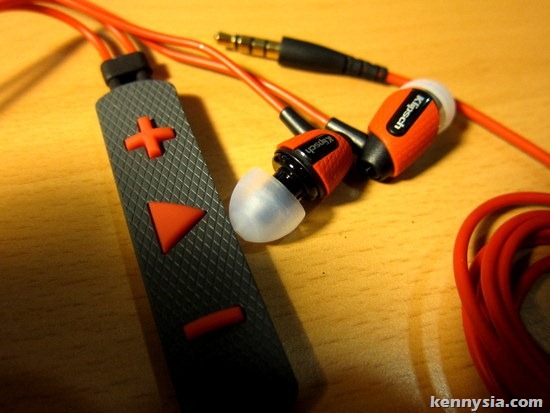 Although not necessary, the S4i Rugged comes with an oversized 3-button inline remote control for easy control of the iPhone or iPod during exercise. Some may find this a convenience, although I’m sure there will be others who find it a weighty annoyance. 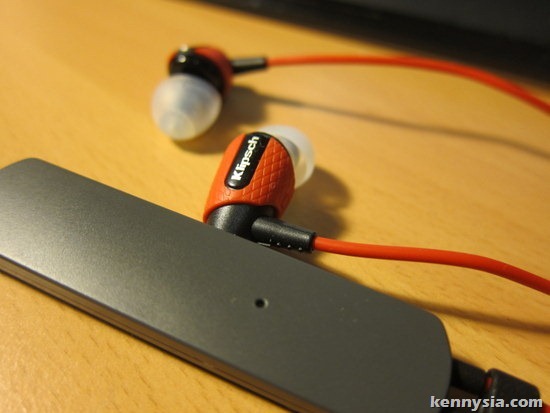 The tiny little hole behind is the multi-directional microphone – useful for answering phone calls from your mom asking if you’re coming home for dinner while you’re halfway gasping for air. 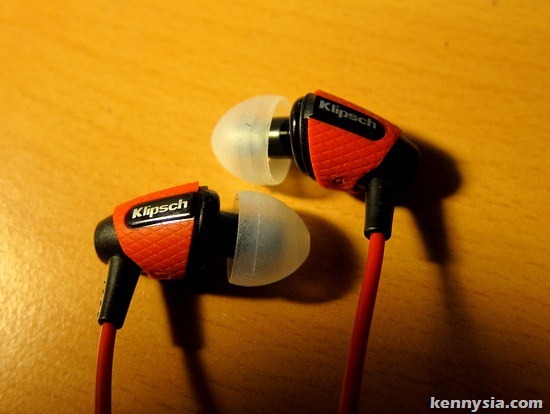 Though not made for the swimming pool, the S4i Rugged is touted to withstand extreme outdoor activities. Sweaty ear canals popping those ear buds out during exercise should be the least of your concerns.

In any case, the S4i Rugged comes bundled with 4 different sized buds to suit all kinds of ears from humans and Yoda.

As usual, noise-isolation is excellent. Not a single baby cry was heard on my flight from Singapore to Kuching. 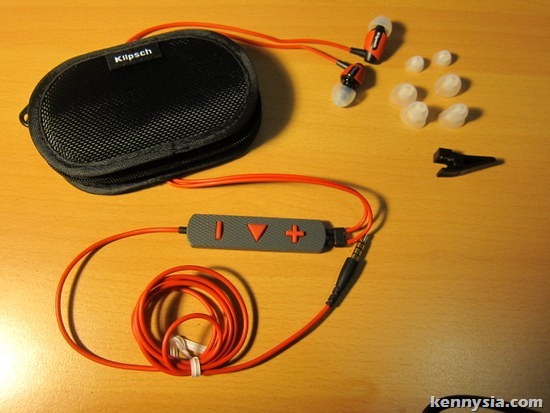 I would have preferred it came with a carabineer hook, but that’s of tiny concern. At least the earphones come now with a choice of red, yellow, orange or blue instead of just black or white. 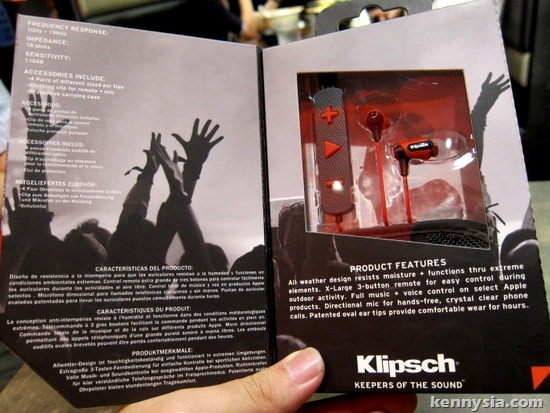 Sound quality-wise, there are no surprises. The S4i Rugged sounds exactly the same as the original S4. They are after all, made using the same internal organs.

For users of el-cheapo earphones, the sound quality is gonna be immediately noticeable when you switch to using a Klipsch S4i. The extra ruggedness is just a bonus for the active ones among us.

Though some may find the sound on the low-end a bit too emphasized, runners would definitely appreciate the S4i’s punchy bass response when matching their running pace to the music’s bpm. 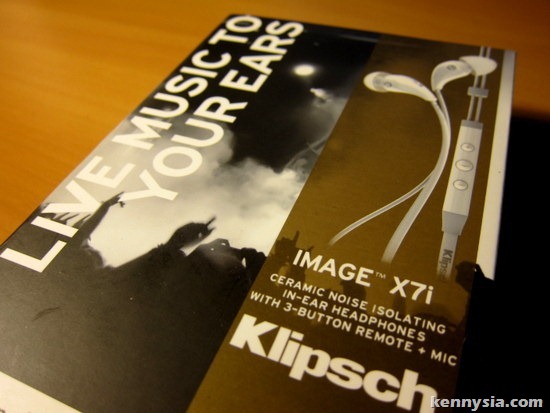 At the premium end of the spectrum, is the Klipsch Image X7i – the company’s first ceramic earphones.

Price-wise, the X7i are cost nearly twice as much as the S4i Rugged and are designed to compete directly against SHURE and Beats by Dr Dre’s premium end of the price spectrum. 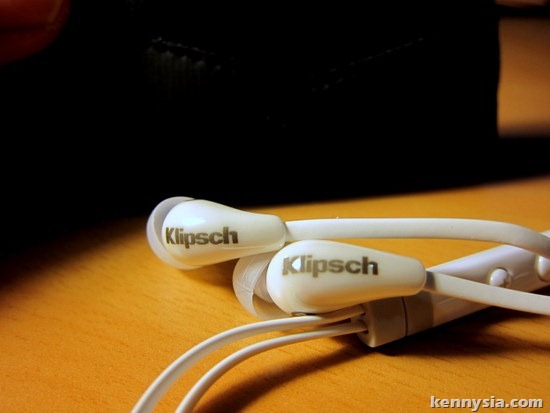 Honestly speaking, when I tried out the X7i at the Tat Chuan showroom, I was a tad unimpressed. Playing from my iPhone, Coldplay sounded a little "broken"  and the ear buds kept falling out of my ear canals annoyingly.

I thought they couldn’t justify charging that much for what they say is a premium set of earphones, but I took the review unit back home for a spin anyway. 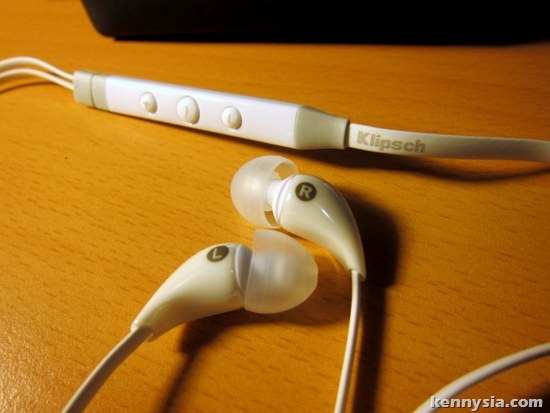 If anything, the X7i certainly possess that air of sophistication. When knocked against each other, the ceramic cans produce a satisfying "click". Laser-etched logo its sleek surface completes its sexy look. 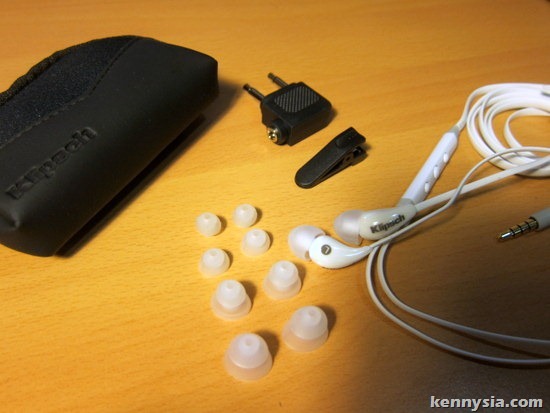 That’s convenient. I simply swapped out the default ear tips on the X7i with a pair of double-flanged ones that fit me, press play on Sebastian Ingrosso’s Lose My Mind and WHOA MOMMA! 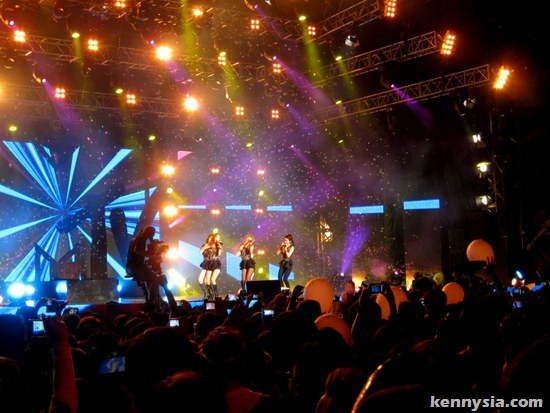 It was like being transported from my desk chair to a live concert. Without the screaming fans. And the jostling. And the sweat. And the body odour.

Every deep bass, every crisp treble was reproduced perfectly. The music sounded unbelievably life-like and AMAZING. 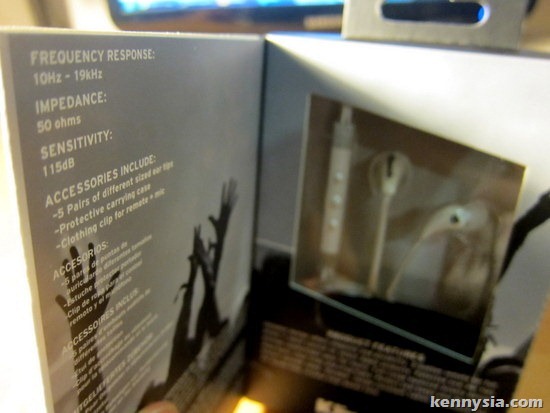 How did something that sounded so bad in the showroom turned out so mindblowingly awesome on my computer?

My guess is that the X7i is so good at picking up tiny musical details that if the music source I played was crap, that crap became multiplied many folds through the X7i. That was exactly the case with the MP3s on my iPhone.

When playing lossless music on my computer and listening through the Klipsch X7i, the music was so real I literally had goosebumps on my skin.