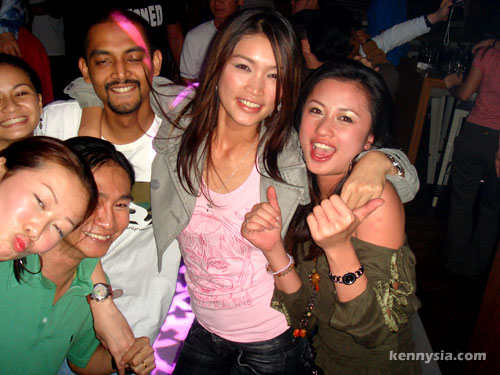 I got wind that Pensonic (a Malaysian electronics brand, not to be confused with Japanese giant Panasonic) had sent some down of their celebrity spokespeople to Kuching for some PR work yesterday. The stars were partying at Senso that night and some of the big names from the local filmmaking industry were there.
Wanting a piece of the action, I went in to have a look and here are some pictures from the night. 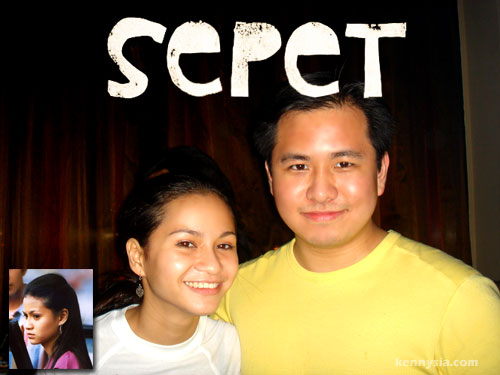 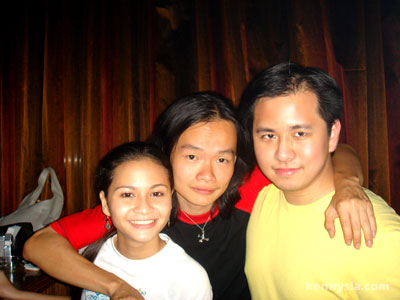 Two of my favourite stars from the Sepet cast.

Kuching boy Linus Chung, who (unfortunately) is best known as the guy in Sepet who delivered that classic line “Hang Tuah… Hang Jebat… Hang Cheebye.”
What most people don’t know is that Linus is also an up-and-coming filmmaker whose work include many of Pensonic’s TV commercials and the music video for Malaysian Idol Daniel Lee’s hit Organic Love. Not bad for a small town boy from Kuching. 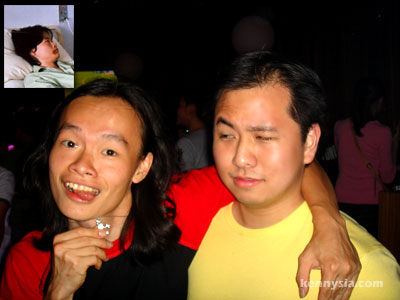 Linus Chung is the only one in the room who’ve read kennysia.com, and has his own blog at thefrogcroaks.blogspot.com. Don’t ask me, I don’t get his obsession with frogs either. 🙂 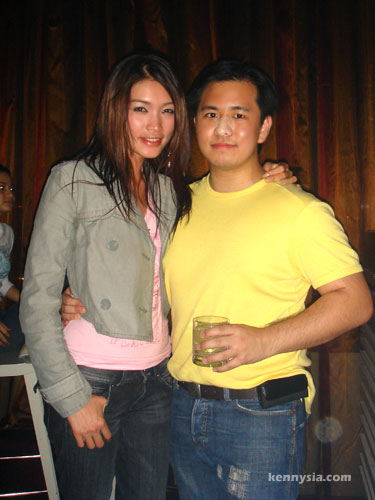 Who else but the stunning international model Amber Chia, who has endorsed EVERY SINGLE BLOODY THING ON EARTH there is to endorse, from Guess watches to Stila Cosmetics to FTEC notebooks to Jasmine rice to Pensonic shower to god-knows-what-else. 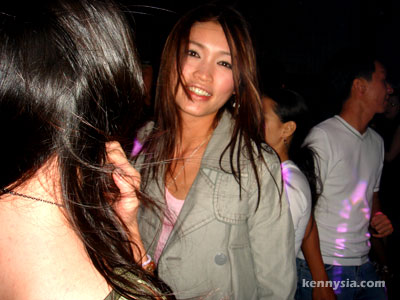 I like her. She’s definitely the friendliest and best-behaved from the whole entire group. Mannnnnn, her sexxxy dance moves gave me the nosebleeds. 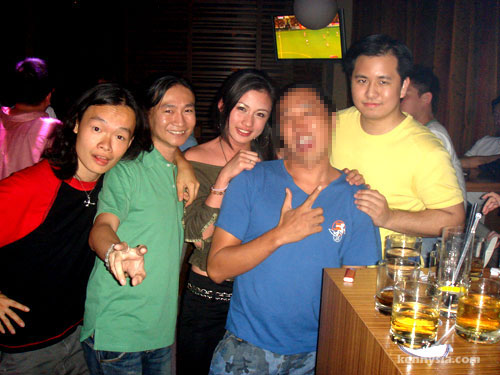 The guy in green in Bjarne (pronounced Bee-Yon) Wong, a friendly Sibu guy who made his mark in Hong Kong then returned to direct Sarawak’s first feature film The Legend of the Red Curse, an indie low budget Blair-Witch-Projectesque movie shot with handheld camera. 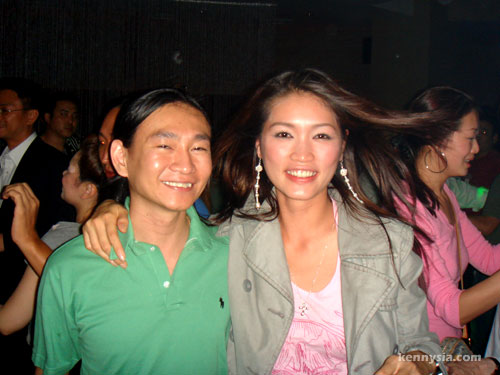 Damn that woman looks hot from all angles

A quiet drink at a nearby kopitiam later that evening, Bjarne showed me publicity posters for his next movie Possessed, this time boasting bigger budget, better film camera and bigger stars like Amber Chia and Korea’s transexual starlet Harisu (yes, she WAS a boy). 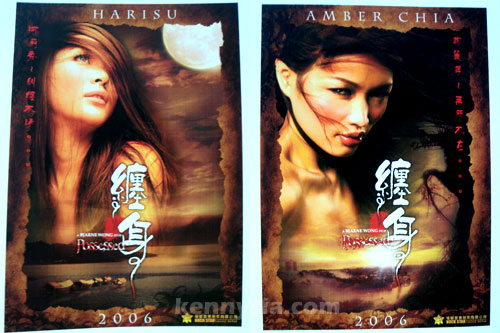 These posters aren’t even out in newspapers or magazines yet, so remember you’ve seen it first on kennysia.com. 😉
Hopefully this movie will churn out better results than his first. 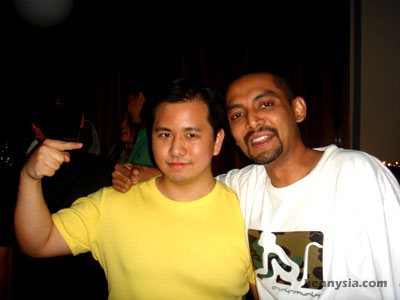 With Hitz.fm Morning Crew host JJ. Out of all the stars that were there, he’s the only guy whose work I’m most familiar with ‘cos I listen to him every morning on my way to work. Delightful guy who’s as happening off air as he is on air. 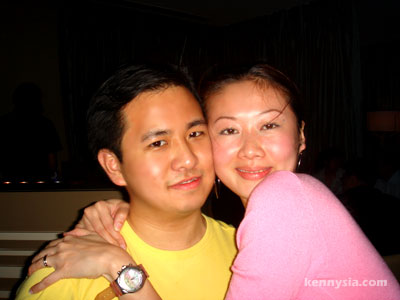 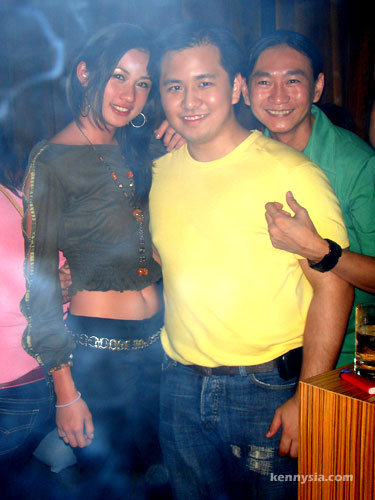 Miss Chinese Cosmo International Carrie Lee. HOLY SHIT did you see that? That woman is ONE THIRD MY SIZE!
Let me die, just let me die. 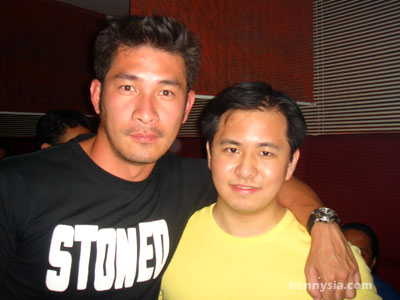 Umm… who is this guy again? Anyone knows? 🙂 Heh.
This one is funny. Carrie Lee and Pensonic’s head honcho were making their thank you speech by the DJ Console when some crazy nutcase appeared out of nowhere, grabbed their mike and yelling “KUCHING GOOD! KUCHING GREAT!” 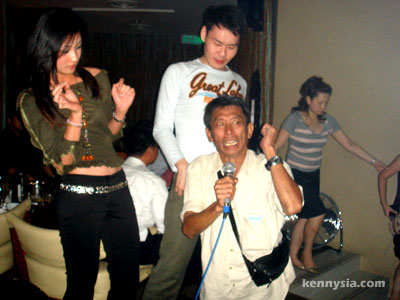 The expression on their faces say it all.
Anyway, later that night I was trying to get Amber Chia to hold up an “I *heart* kennysia.com” sign, as seen here with sweet Follow Me girl Angel Yeoh. Just for fun obviously. 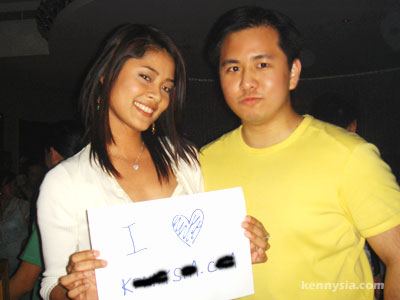 Before I can do it though, one of those obscure Pensonic spokespeople approached me and asked me which newspaper I’m from.
KS: I’m not from any newspaper, this is just for my blog.
??: Can you promise not put up photos of us getting [insert suitable word for ‘enjoying ourselves too much’]?
KS: Yea I can promise you that. I don’t intend to anyway, it’s not ethical for me to do that.
He wasn’t convinced. A few minutes later, he approached me again and asked. 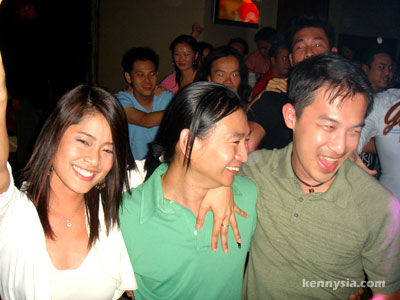 ??: Since you’re not gonna use it, you can delete it off your camera right?
KS: Err… sure.
So I pulled out my camera and delete the naughtier photos right in front of him, out of goodwill of course. I never intend to publish them, nor do I intend to cause them any bad publicity.
He STILL wasn’t convinced. 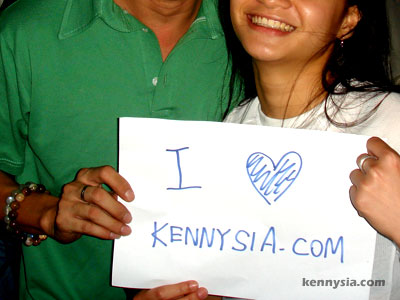 ??: What’s that photo? I love… what?
KS: That’s my website address.
??: You can’t do that. You got to pay her endorsement fee if you want to use that.
KS: Oh no, I asked for her permission already. I’ve asked all of them for their permission and they said yes.
??: She’s [insert suitable word for ‘enjoying herself too much’] and doesn’t know what she’s saying. If you put it up, she can sue you for RM80,000.
KS: Alright then I won’t put it up. I’ll just keep it for myself ok?
??: No, delete, delete.
KS: No… Don’t worry I won’t publish it. You have my word for that. Promise.
Bloody guy didn’t listen. He rudely snatched over my camera and delete all the photos with the “I *heart* kennysia.com” sign on it.
Even the ones that didn’t involve the Pensonic spokespeople. 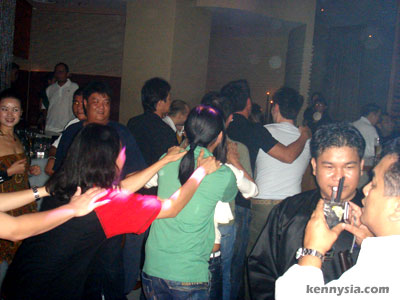 I just took the STUPIDEST exam I’ve ever had in my entire life.
Stupid, because the examiner was so hell-bent on making sure we have absolutely NO CHANCE IN HELL of cheating (ie, no papers, no programmable calculators, no notes written in the palm of your hand, no underwear). Yet, they carelessly forgot that this computer-based exam was held inside an INTERNET CAFE where un adulterated access to the world wide web is completely free and easy.
Idiots.
Needless to say, I passed the exam with flying colours.
Without cheating of course.
Serious.