In Malaysia, sometimes, our ministers write the jokes themselves.

Transcript of Malaysia’s Information Minister’s interview with Al Jazeera News on the Bersih Protest.
Minister: I commend yo-yo-your journalists trying to project… to exaggerate more than what actually happened. That-that-that-that’s it. We are not the-the and I-I congratulate your journalists behaving like an actor, that-that’s it…
Reporter: As you say that, sir, we’re watching scenes of protesters being sprayed by chemical-filled water!
Minister: YA! I am watching! I’m here! You’ve been trying… trying to do it this – to do this everywhere but in Malaysia people are allowed to, you know? We know our police head our colleague… Police have whatever allowed the procession to go to the Istana Negara, you know? Do police, first police, like, they handle them, they attack them, they… the police don’t, don’t, don’t fire anybody?
Reporter: Our correspondent came back to the office, sir, with chemicals in his eyes!
Minister:You-you-you-you are here with the idea, you are trying to project, what is your mind! You think that we Pakistan, we are Burma, we are Myanmar. Everything you-you are thinking! WE ARE DIFFERENT! We are totally different!
Reporter: Well unfortunately when you refuse to let people protest, it does appear so.
Minister: Ya ya we are not like you! You-you have earlier perception, you come here, you want to project us like undemocratic country. This a democratic country!
Reporter: So why can’t people protest then, if it’s a democratic country?
Minister: YES, PEOPLE PROTEST! People do-do… of course they protest. We are allowing them protest, and they have demonstrated. But we just trying to disperse them, and then later they-they-they don’t wanna disperse, but later our police compromise. They have compromised and allowed them to proceed to Istana Negara! Police, our police have succeeded in handling them gently, right? Why do you report that? You take the opposition, someone from opposition party you ask him to speak. You don’t take from the government, right?
Reporter: Why did you not break up these protests…
Minister: Pardon? Pardon? Pardon?
Reporter: Why did you not break up these protests more peacefully?
Minister: I can’t hear you! I can’t hear you!
Reporter: Why did you not break up these protests more peacefully?
Minister: No we-we are! We… this protest is illegal! We don’t want..this… the… NORMALLY…
Reporter: OK, so let me return to my former question. Why is this protest illegal?
Minister: YA! It’s a illegal protest because we have the erection in Malaysia. It’s no-no point on having a protest! We are allowing to every erection… every five years never fail! We are not our like, like Myanmar, not like other country. And, and you are helping this. You Al-Jazeera also is helping this, this forces. The, you know, these forces who are not in passion, who don’t believe in democracy!
Reporter: Alright, many thanks for joining us.
Minister: I don’t, ya, you, Al-Jazeera, this is, is Al-Jazeera attitude. Right? 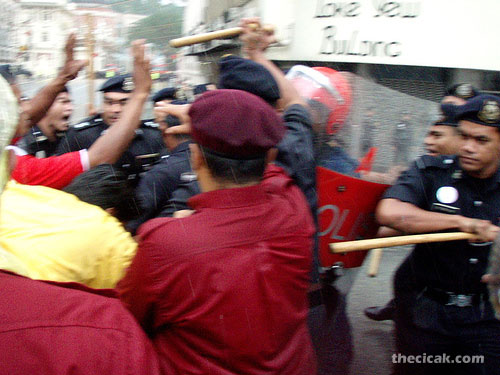 “The police did not use force to quell the gathering”

Was that even English he was speaking? I tell ya, these people just write the jokes themselves.

The winners of the final HUGO contest are Elvin and gal.
Got nothing to give liaw.