It is very difficult for me to write this entry objectively without offending people. 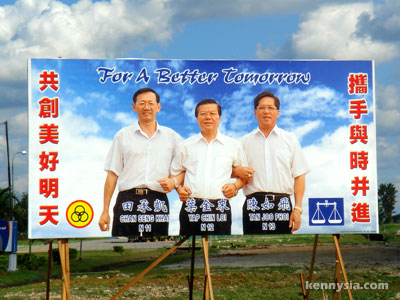 Cutest. Election billboard. Ever.
While other bloggers can openly state whichever party they are supporting, with kennysia.com’s massive readership and me having friends on both sides of the fence, I regret I am not able to do the same. As much as I’d love to bare it all out no-holds-barred style, I understand that politics, like race and religion, is a very sensitive topic.
Revealing who I voted for would be quickest way for me to make enemies.
With that in mind, I ask that you read this entry with an open-mind, and understand that it is important that I voice out my opinion in my domain, but it is not my desire to offend anybody or rub salts into the wound. It’s just a blog. Nothing personal. 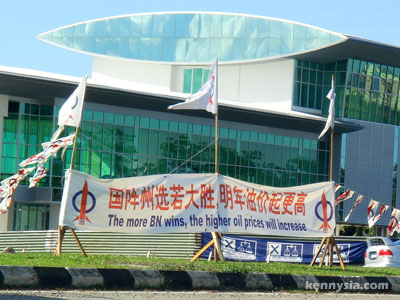 We’re just coming off from an exciting landmark election in Sarawak.
You see it in newspapers all over Malaysia today. The Sarawak Legislative Assembly since its inception has always been heavily dominated by the ruling Barisan Nasional. The Opposition often holding a weak 2, no more than 3 seats.
Yesterday’s historical election results was a shocker to many. I didn’t believe it when I was walking out from the gym at Hilton, and the taxi drivers were yelling in Chinese “Huo Jian Fei Wan Ah!” (Rockets flew today!) 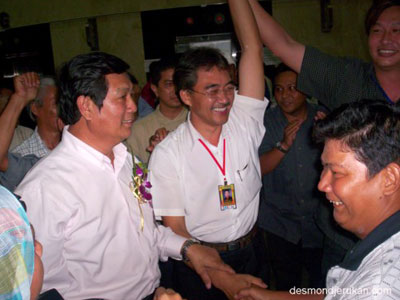 BN swept most of the rural seats, but a total of NINE seats were lost to the Opposition. In urban Kuching, the Chinese-majority constituencies of Batu Lintang, Pending, Kota Sentosa, and Padungan all fell into the hands of DAP and Keadilan.
One theory I heard was that Kuching-nites were getting increasingly fed up with the Chief Minister, and were upset when SUPP repeatedly failed to voice out their concerns against the state’s head. The message Kuching-nites is sending to their (former) elected representatives in State Assembly is clear: “You didn’t work for us, so we didn’t vote for you.”

One, I like her hair, and two, Violet’s mom makes good ‘loh bak’

Most impressive victory must go to DAP’s Violet Yong, a 29-year-old law graduate from Melbourne University, who managed to defeat 63-year-old BN’s seasoned veteran and Assistant Minister Datuk Sim Kheng Hui by a whooping 4,400 votes in her first ever electoral debut.
Instead of giving Datuk Sim a mandate, the voters has denied Violet Yong a man to date. Because once she gets busy with politics, where got time to find man date right? 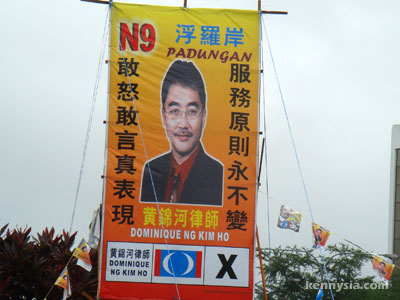 Another upset victory is Keadilan making their first win in Kuching. Who would’ve thought popular and well-liked Lily Yong could’ve lost to a Keadilan lawyer with a funny moustache?
Why, just a few days ago Lily Yong even held a massive concert in the rugby field over there. Musical concerts as part of an election campaign? Hell yeah. 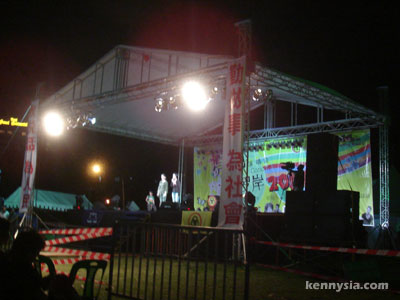 I was a little disappointed BN’s Chan Seng Khai didn’t retain Batu Lintang. He’s a pleasant guy and I always thought he did a great job as Kuching’s mayor. Then again, stranger things have happened. Like Chris Daughtry getting voted out from American Idol.
The biggest losers this election aren’t any of the candidates, but the newspapers in Sarawak. I’m talking about the Eastern Times and Borneo Post. Hey if I had to turn to a national newspaper like The Star for not-so-biased election coverage, that’s not saying you’re bad. That’s saying you’re utterly hopeless as a newspaper because you’ve failed in your very basic duty to inform and educate the public. 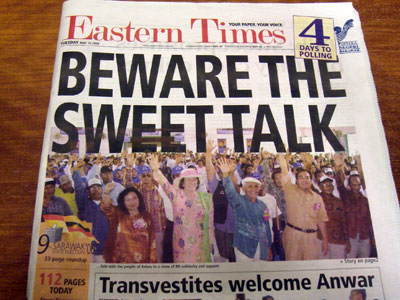 It’s one thing to carry the furry balls of your owners, it’s another thing to uphold the confidence of your readers. If you anyhowly print big bold headlines humiliating Anwar and calling the Opposition ‘traitors’ without having any sorts of facts to back it up, you’re just gonna make yourself look stupid. No one is going to believe your bullshit. You’re insulting our intelligence.
Congratulations to all winners, and especially to Taib Mahmud, our would-be Chief Minister for 30 glorious years. Happy 70th birthday. Sorry about the birthday present.