Got a wet dream a few nights back.
Was feeling restless, so I called up Ernest and asked him to satisfy my urges. 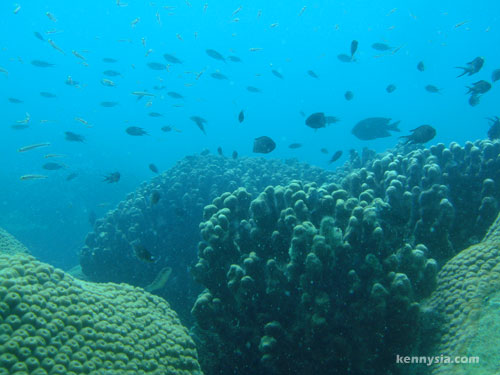 Diving urges, I mean. I haven’t been diving since Jakarta.
Kuching diving season starts in April and ends around September. I gotta satisfy my underwater cravings before monsoon season kicks in and force me to stay indoors. I also wanna test out the new wetsuit and snorkel I bought during the dive expo a while back. 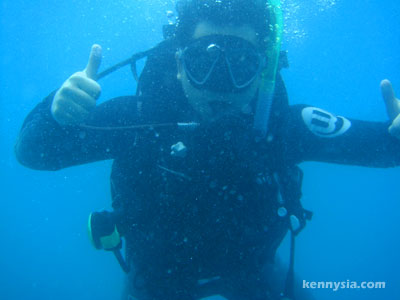 Ernest brought us to Sematan – a little fishing village about 1.5 hours drive from Kuching. From there we took a chartered fishing boat out to Talang Island, which took another 20 minutes or so. I paid him RM210 (including gear rental) for the whole trip.
The road to Sematan was long and bumpy, but the gorgeous aquatic views made the difficult journey worth every bit. Armed with my trusty Sony T10 and a marine case, I was ready to shoot heaps of great photos underwater. 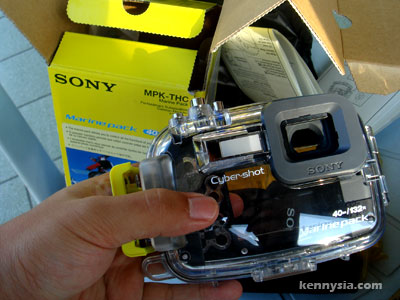 Kuching isn’t as popular as other better-known diving locations in Malaysia, but we still get a nice stretch of coral reef here.
For a lot of people, when they think corals, they think beautiful tentacle-like corals like these. 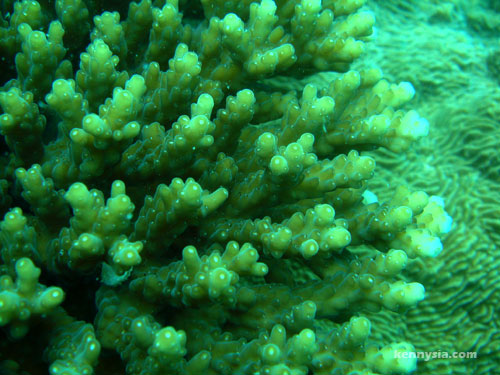 That’s not quite the case over here.
We have some standard-looking corals, but most of the other ones look a little strange. 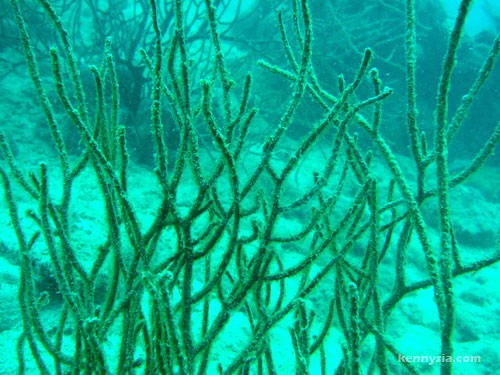 Corals in underwater Kuching are very eerie-looking, looking more like props out of a B-grade zombie movie than Alice In The Wonderland. 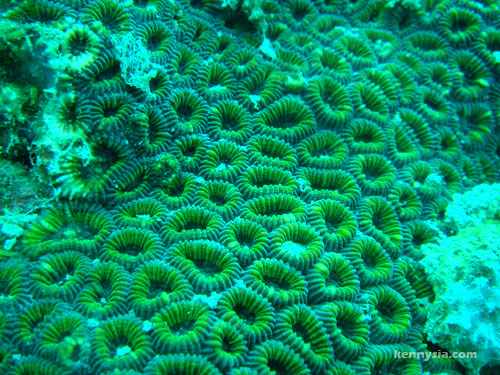 This one has a surface that look like those octopus creatures from Japanese anime. 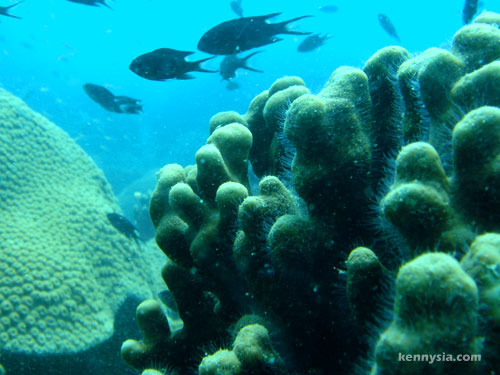 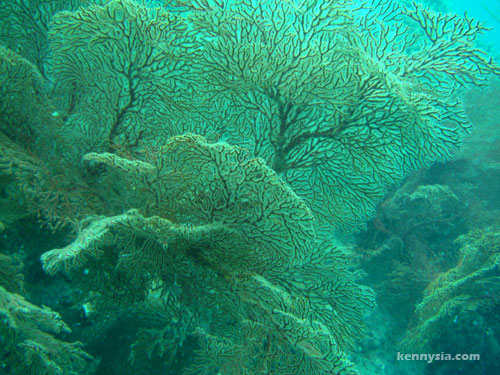 These are fan corals. They are the only ones that look hauntingly beautiful. 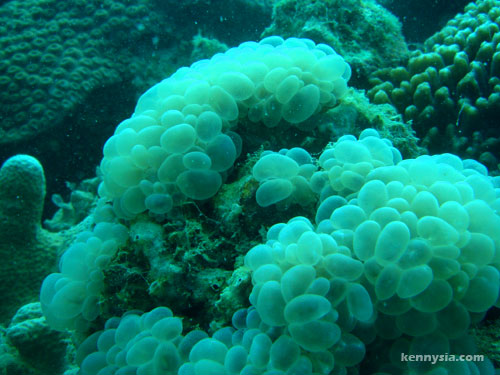 These ones look like grapes.
My guide said they are bubble corals. I reckon they should be called condom corals. 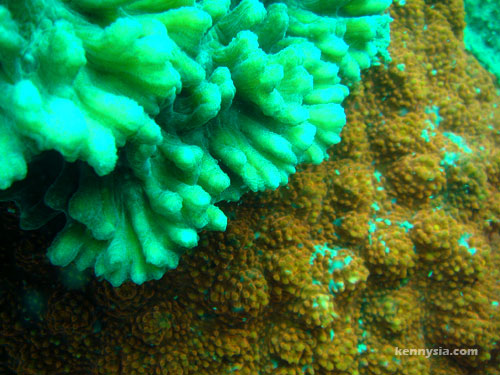 There’s something surreal about being surrounded by thousands of fish circling above your head.
I feel so miniscule in such a huge space of magnificent underwater world. 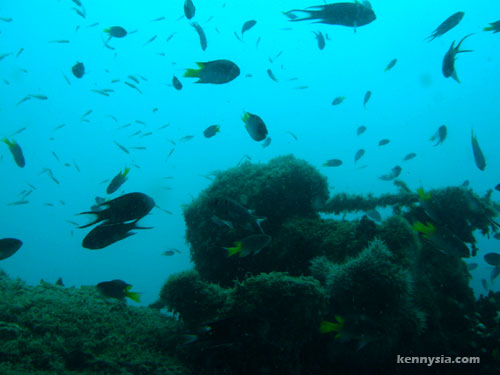 Normally, the only chance we get interacting with marine life is looking them through an aquarium, or eating them on the dinner table. For once, I am in their territory and they are not in mine.
The presence of well-preserved corals in Kuching attracted heaps of marine life. 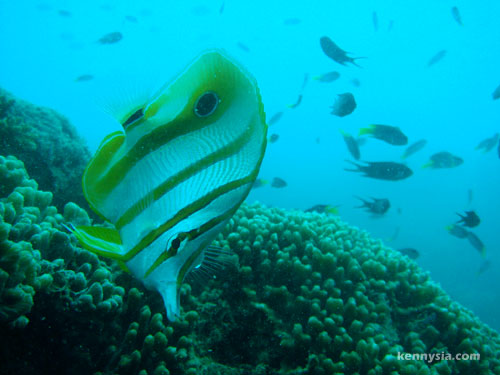 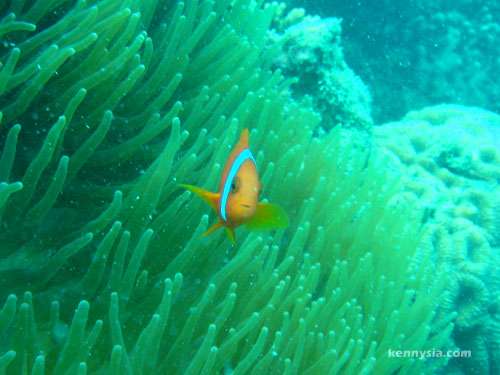 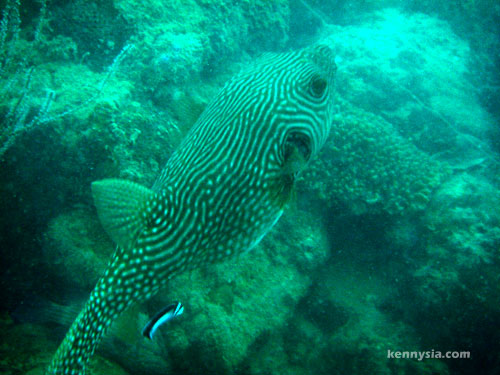 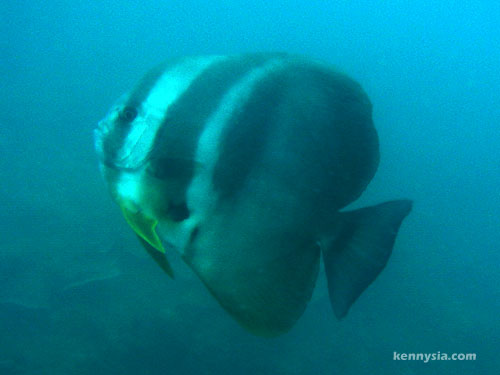 Some look like you could use it to fan yourself during warm days. 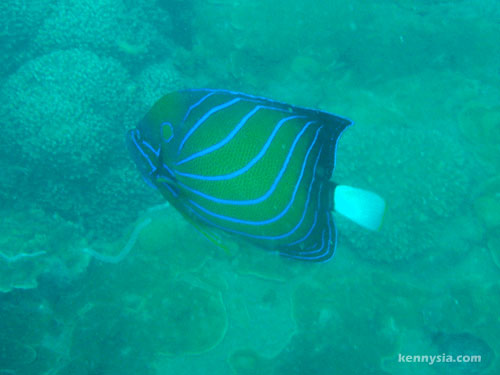 Some even look like Ah Beng cars with blue neon lights. 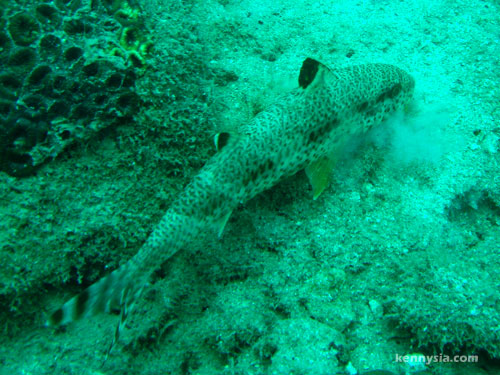 Then there are those that just look really delicious.
I’m not even sure what fish this is, but I reckon it should go well with sambal and a bit of lime juice. 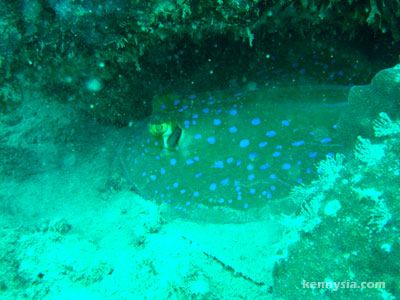 One of the most fascinating discovery I made that day was a blue-spotted stingray hiding under the rocks.
These graceful creatures are so timid and shy in nature. It didn’t even flinch one bit as I swam closer to take a macro photo of its intense-looking eyes. 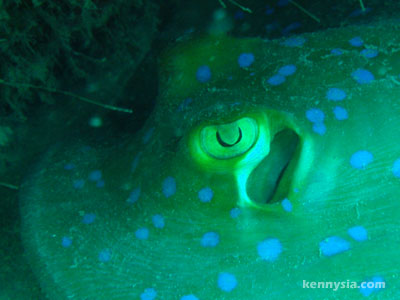 Can’t believe they’re of the same species that killed Steve Irwin last year.
I stayed for the longest time underwater during this dive – 82 minutes. That’s quite an improvement considering the first time I dived, I lasted a pathetic 25 minutes before I gulped up all the air in my tank. 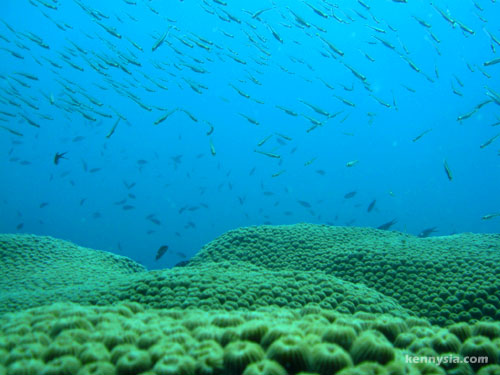 As much as I’m flattered that my “suggested” Jeff Ooi election campaign video received praise from even Opposition Leader Lim Kit Siang, I must stress that I am not aligned to any political party, and that kennysia.com remains politically neutral. 🙂