Just a short texty update today. I’m bringing my father to Singapore tomorrow and coming back on Friday, so time is precious on my side. Obviously, I won’t be updating tomorrow.
I was at an RHB Bank earlier because I had to open a bank account for salary credit purposes. Being away from Malaysia for so long meant that I had forgotten almost all my Bahasa Melayu. I was never good in that language anyway. I always scoff at it because they used so much loan-words from English its not Malay anymore. For example,
What’s “computer” in Malay? Komputer!
What’s “account” in Malay? Akaun!
What’s “sex” in Malay? Seks!
Its ridiculous!
So I went up to this nice lady at the counter, who happen to be a typical Malay Muslim girl with the tudung and all, and I asked her nicely in the best Bahasa Melayu I could muster.
“Saya want to open a bank account with RHB!”
…
Damn! The whole sentence only one proper Malay word. Nice going, Kenny.
The nice Malay lady at the counter smiled at me and replied,
“Ni yao kai Savings Account hai shi Current Account?”
…
Yes, you read that right.
The Malay lady at the counter, knowing my superior excellence in the Malay language, does not even dare to compete with me! Which is why she spoke to me in perfectly fluent Mandarin for the next 30 minutes whilst she complete my application.
I was pleasantly surprised to say the least.
I have noticed a positive change in terms of racial demographics in Kuching lately, which I can only describe as vibrant. Today, apart from Malays who speak Mandarin and Indians who speak Hokkien, there’s also a large number of Ibans, Bidayuhs, etc who migrated from the rural areas to Kuching to attend Universities, and they all speak perfectly good English, albeit with an accent but that’s ok. And I love it! Alright, I admit it kinda helped that a lot of them indigenous girls have sizzling hot bodies, but still!
On the other hand, the Chinese population in Kuching are divided cleanly into three groups:
1. Chinese who speaks good Mandarin, but bad English;
2. Chinese who speaks good English, but horrible Mandarin;
3. Chinese who speaks the foul langauge like “Chau chee-bye! Kan ni nah!” 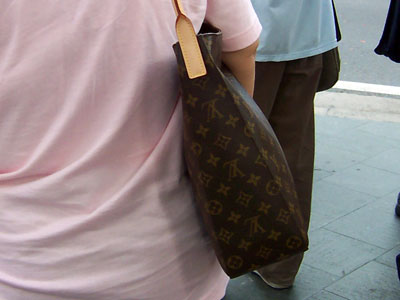 I was chatting amiably with the Malay counter lady in Mandarin. Meanwhile, a middle-aged Chinese lady was standing by the counter beside me, her (obviously fake) Louis Vuitton handbag hanging on her arm, striking a typical rich tai-tai pose. Apparently she’s here to pick up her new AirAsia Mastercard, which is a pretty good credit card that allows you to earn points that can be exchanged for free flights on AirAsia.
Anyway, the counterperson arrived with her new credit card and the lady asked him, “So this credit card can only be used to buy AirAsia tickets one ah?”
“No ma’am, you use it like a normal credit card and the points you earned can be exchanged for AirAsia tickets.”
“YOU MEAN I CAN USE IT TO GO SHOPPING AH!?!?!?” she exclaimed so excitedly the old security guard suddenly woke up and drew his gun.
At this point, I can see the poor counter boy looking at her with eyes that say “OF COURSE YOU CAN USE IT TO GO SHOPPING LAH YOU STUPID DUMBASS! What kinda stupid credit card company would be dumb enough to only let you use it to buy budget air tickets only!?”
But instead, he managed the most insincere smile in the whole world and replied “Yes, you most definitely can do so. BITCH!”
Sorry I added the last word. 😉

23 Replies to “Two Extremes of Human Intelligence in a Bank”