This entry is not-safe-for-work, so make sure your boss, workmates, husband, wife, brothers, sisters, children and doggies are not around you before you continue reading.
If I ever said I’m not a fan of Saddam Hussein, I’m sorry. I take those words back. He’s found a new fan in me after the Iraqi Bloggers Conference 2005.
Saddam Hussein missed all the afternoon session of the conference and turned up only during the after party. 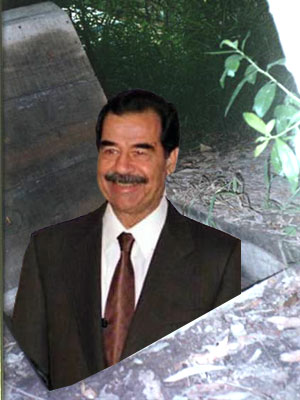 Spider Hole bars are all the rage in Iraq.

I spotted him wearing business suit inside the spider hole of Baghdad’s hippest club, WMDXO at the Esplana-Fallujah. I don’t know if he knows me, so I walked over there and introduced myself.
I’m glad I did. That man just kept giving me surprises after surprises throughout the night.
Kenny: “Hi, I’m Kenny. :)”
Saddam: “Heyyyyyyyy, you’re Kenny! You’re from Kuching right? Guess what? I’m from Kuching too!”
Kenny: “Whoa!”
Surprise #1: Saddam Hussein recognised me.
Surprise #2: Saddam Hussein is from Kuching! Damn, I never read enough of his bio to realise that. 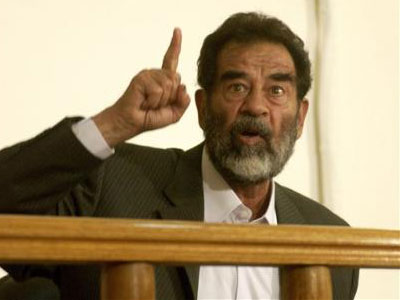 “Excuze me teacher! I want to go to toilet!”

To be precise, Saddam Hussein is born in Tikrit but his parents are from Kuching. But I don’t care, I want to claim him as one of our own. 🙂 Despite him being so controversial, I’m still proud that such an evil dictator like him has roots from my hometown, ok?
Saddam: “You know… I know exactly what your Weapon of Mass Destruction looks like.”
Kenny: “I know what your Weapon of Mass Destruction looks like too!”
Not bad for a conversation starter eh? How I wish I could say that to every evil oppressor I know. 😉 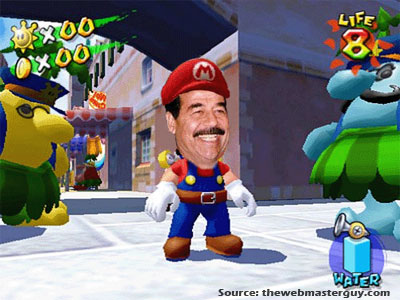 Before he found fame as an evil dictator, Saddam worked as a tortoise-fighting plumber for a short while.

We were referring to the ‘UN Weapons Inspection’ crisis when Saddam Hussein vehemothly denied that he possessed stockpiles of Anthrax and VX nerve gas agent. Next thing you know, George W Bush went crazy sending airstrikes and ripped Saddam a new asshole with his cowboy ‘Shock and Awe’ campaigns.
I was amused why George W Bush made a big deal out of this when UN inspector Hans Blix already said that Iraq has no Weapons of Mass Destruction. So I went ahead and e-mailed George Bush a photo of me with my WMDs. 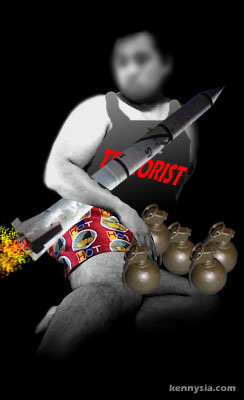 Sad to say, my picture wasn’t as well-received.

Later that evening, in a Saddam Hussein’s secret underground dungeon where many other evil Iraqi generals were congregating…
Kenny: “Hey Saddam, can I take a photo with you?”
Saddam: “Yah, sure!”
Kenny: (to Chemical Ali) “Ali, can you help us take a photo?”
Chemical Ali: “Sure, man.”

Saddam: “You know what would be really funny? I think we should do a photo together showing off our nuclear bombs.”
Kenny: “!!!”
Kenny: “I’ll do it. Are you gonna do it?”
Saddam: “I’ll think about it, but only if you do it first.”
Kenny: “Okay.” 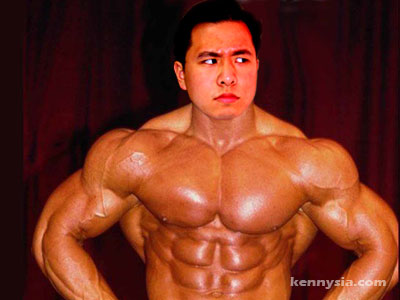 Who said I have two pimples in front of my chest?

I don’t know what happened next but the chatty room full off evil tyrants suddenly turned quiet. VERY quiet.
All I remember was Chemical Ali shaking his head saying “Those nuclear weapons deserve an entire Gulf War on their own, man.”
Chemical Ali’s camera flash went off.
I turned and saw Saddam quickly putting his trousers back on. I reviewed at my camera AND THEN I saw this. 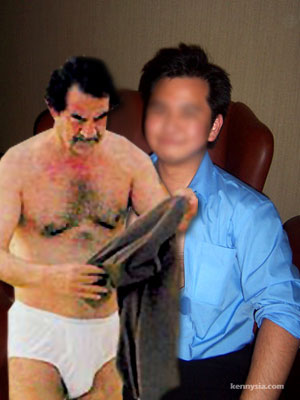 OH. MY. FREAKIN’. GAWD.
I showed it to Saddam and we burst out laughing our tits off. It felt as if I just shot the cover of my first terrorist-training DVD – “Hairy Potter and the Half Naked Czar”
Chemical Ali walked away in disbelief.
Chemical Ali: “I’ve got only one thing to say about this, man… LET’S GO TAKE OVER THE WORLDDDDD! YEAAHHHHH!!!”

Myself and a few other Malaysian bloggers will be participating in the upcoming Blogathon for Charity program on the 6th-7th August 2005. Our collaborative blog is over at BloggersAreMorons.com
We’re still finalizing on the details, but we’ll make sure its gonna be a fun thing for everyone. At the end of the day, it is for a good cause. Come 6th August, I hope our readers can be generous with their donation.