Today is the 27th April 2005. No there’s no major festivities going on.
But exactly six months ago on the 27th October 2004, is the day I knew my father contracted cancer. Exactly six months ago, the doctor estimated that my father has six months left to live.
Its been six months and shit, so much has changed already. As of this week, I’ve taken time off work to stay at home and care for my father full time. Reality is a bitch, but hey I’m still coping.
I don’t know whether I should be happy that my father has survived that six months, or feel sad because the worst may be coming near.
*~*~*~*~*~*~*~*
On a totally unrelated note, I’ve created some buttons for kennysia.com just because I feel like it. Yalah yalah I’m hoping that more people would link to me or something. It makes my balls bigger.

Speaking of which, I really should re-design this site. Experienced bloggers would note that the design and layout of kennysia.com don’t differ much from MovableType‘s default settings. When I started, all I wanted to do is to start writing as soon as possible. 10 minutes of Photoshop later, the background and masthead of kennysia.com was born. 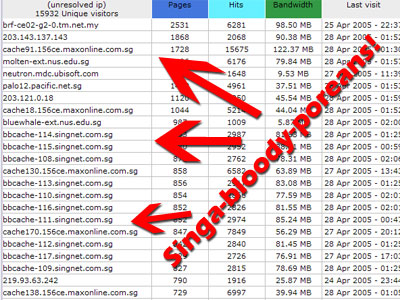 On other site related news, kennysia.com will be moving to a new host this coming weekend. The amount of bandwidth consumed this month alone is ball-shrinking. Its amazing considering the whole entire kennysia.com site is less than 50MB. I’m hoping that the transition will be smooth and sweet, but fingers crossed.
With bigger storage and more generous bandwidth allowance than the current host I’m on, I’m hoping I can showcase content beyond words and images. I captured a pretty funny video last week so I’m really itching to share it with you guys.
Hey, I’m seriously thinking about getting some of those T-shirts printed. 🙂
*~*~*~*~*~*~*~*
Err… proper updates tomorrow, can?
Today cannot make it lah.

23 Replies to “Six Months Ago, Today”