Hmmm… That lasy entry was kinda weird. My apologies. I more or less wrote it under the influence of alcohol last night. It was totally unplanned. Nicole and I happened to be in town, and we decided to check out the Saturday night crowd in Kuching pubs.
This is the Grappa signage I happened to pass by on our way to SoHo: 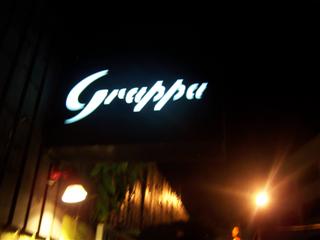 Once in SoHo, we bumped into Kenneth. Kenneth is a very nice guy from Penang. We met him once before through Averil and friends, and he’s been very friendly to us since, often buying us drinks. He’s a heavy drinker himself. A bottle of Chivas costs RM240 in SoHo, and Kenneth would drink almost a bottle a night, for four nights straight.
It didn’t take long for more people we knew to arrive. Averil and Faith are Nicole’s close pals from her TAR College days, and Anna is a common friend of theirs. David, who is a pilot for MAS, soon joined us. Luckily he didn’t drink too much, or else I wouldn’t be taking another MAS flight ever again. From left to right, that’s Kenneth, Anna, Averil and David. 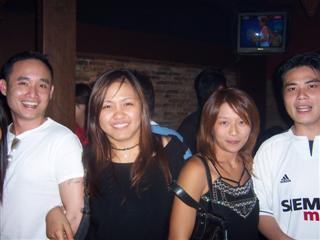 We hung around till about 12, and Nicole and I decided to call it a night. By then I had about 8 glasses of Chivas with coke/green tea. We passed by the Grappa signage again, and this is what it looked like to me: 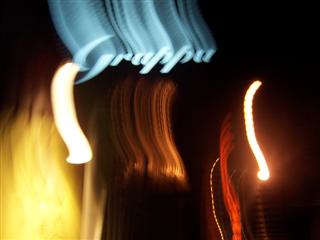 Heh. Anyway, I just sent Nicole off to the airport today. She’s flying back to KL. As for me, I’ll be leaving for Perth in 2 hours time. It won’t be life as usual for me by then, as I would be selling off everything there and return to Kuching for good by March.
Until then, Kuching. Goodbye.

5 Replies to “Saturday Night in Kuching”