I somehow managed to cut myself today. 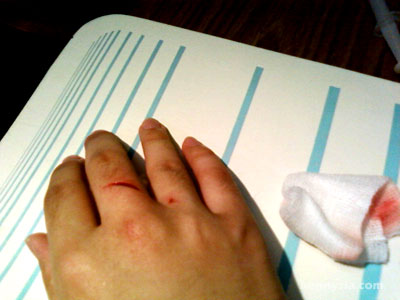 I was walking around a construction area this afternoon. Some contractor there left a huge piece of glass on the table. When I walked past it, I unknowingly swung my hand into the glass and it left a deep gash on my finger.
Strangely it didn’t hurt one bit when my flesh was cut inside. Blood was flowing non-stop, but I thought all I gotta do is put a plaster on it and just go home. 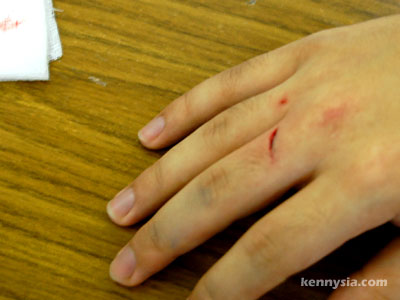 The doctor actually took this pic for me. Haha!

It wasn’t until the doctor told me that I require stitches to close up the gaping wound that I freaked out.
Yes, I may have balls the size of coconuts but I’m a pussy when it comes to people poking needles in me. What more, sewing my flesh up like it’s a piece of clothing. 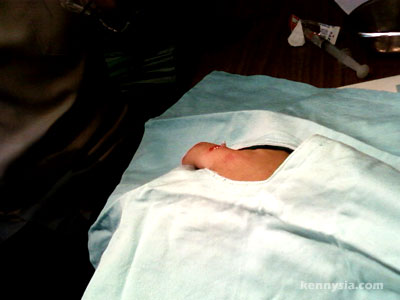 The procedure wasn’t as bad as I thought though. The doctor poked a needle in me and two minutes later my hand was numb. Still, having a needle stuck in me hurts more than having a glass piece slice open my flesh. I had two stitches put on my finger.
I was also refrained from swimming and lifting any heavy weights for two weeks. Guess that pretty much means that come Chinese New Year, my uncles and aunties will be saying “WAH! So fat already huh !?” 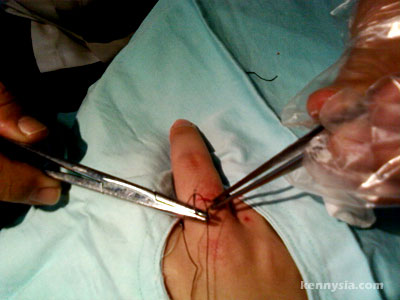 I took a photo of my wounded finger in its worst state, but I don’t think I should put it up here. There are kids and old people reading this thing.
It is very disgusting. And I strongly advise you against seeing it if you have a weak heart. You wouldn’t be able to take it. It is gruesome. Still, if you are curious and you really wanna see how it looks like, feel free to go ahead and…

Has anyone noticed that people who likes to criticise other people normally don’t know how to spell the word “criticise”? They always spell it as “critise”. It gets on my nerves!
For example, “Oi! Kenny Sia! If u dun wan ppl to critise you, then u dun blog things that make ppl critise u! u wanna take critism so dun critise me if i critise u! Understand?”