Right now at McDonald’s, they are running this promotion where they’ll give you a free Big Mac if you can do the Big Mac Chant in less than 4 seconds. 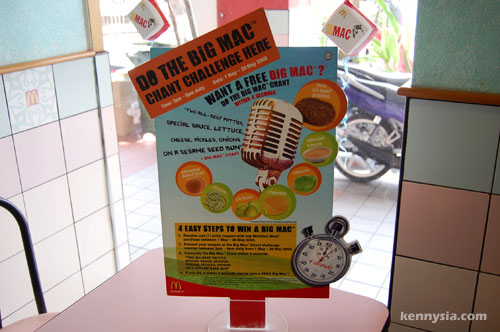 The Big Mac Chant is “Two All-Beef Patties, Special Sauce, Lettuce, Cheese, Pickles, Onions On A Sesame Seed Bun!”
After seeing countless McDonald’s ads on the blogs I read, I actually got pretty hungry and headed down to McD’s in 3rd Mile to officially break my diet. 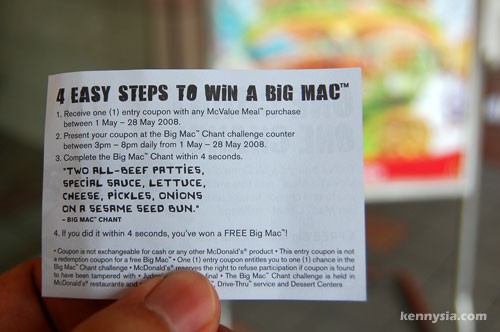 I walked into the outlet pretty confidently because it seems like such an easy thing to do, reciting that one line in 4 seconds or less. But trust me, it’s easier said than done!
Long story short, I kinda screwed up. Badly.
I didn’t win any free Big Macs because I clumsily forgot the words halfway, stuttered, stammered and finished the chant 10 seconds too late, officially becoming the worst Big Mac Chant challenger Kuching has ever seen. 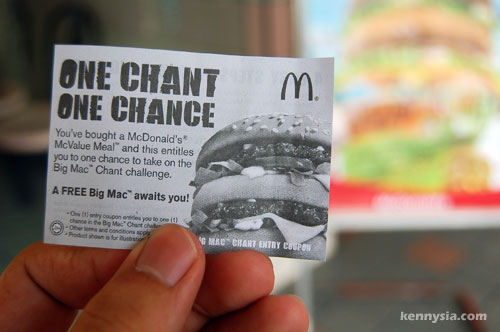 Of course lah, I begged for another chance but they wouldn’t let me. “One Chant, One Chance!” they say.
Fine. So I called up a few of my friends and we took matters into my own hands by playing a naughty little prank on them.
Let’s just say, all the staff and patrons in the McD outlet were in for a very big surprise when they saw who walked through that door.

Heh heh heh. Guess they have no choice but to give me a free Big Mac now, huh?
We had such a big laugh over the incident that we sent our videos in for the Win RM10,000 with the Big Mac Chant online contest. Go ahead and take a shot at the big prize if you wanna.
But I betcha no one is gonna come up with a better prank than what we just did. 😉

I know who is gonna win American Idol.
It’s gonna be David.

195 Replies to “McDonald’s Kuching Gets An Unexpected Visitor”