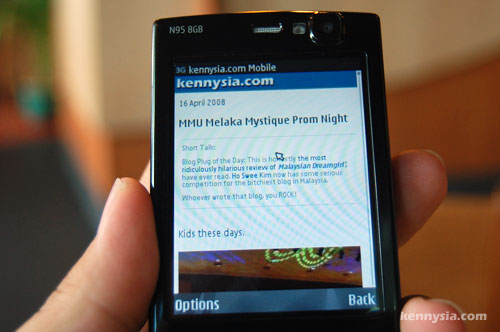 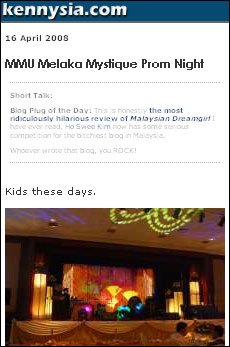 Now this is actually something I’ve been desperately wanting to do for a long time, but never had the time to do so until recently.
With the introduction of Maxis 3G in Kuching and throughout Malaysia, a lot of people are now using their mobile phones to go online. I know because since I switched over to Maxis and hooked up with one of their Maxis mobile browsing plans, I find myself going online everywhere I go, all the time. 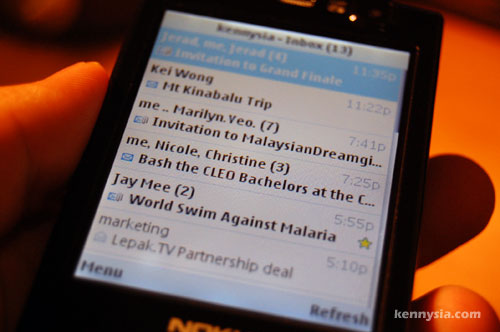 It’s really useful.
Most of the time I’d use my phone to check e-mails or read up on blog comments whenever I’m on the run.
More recently, I’ve been using it to surf news sites like Malaysiakini.com, especially during election time when I wanna be informed immediately which seats have fallen to the Opposition.
It’s not just me that’s doing this. Everyone around me are keeping up with the trend, going online everywhere using their 3G mobile phones. But sadly those people use it for a different reason lah.
They only use it to check the latest soccer results. 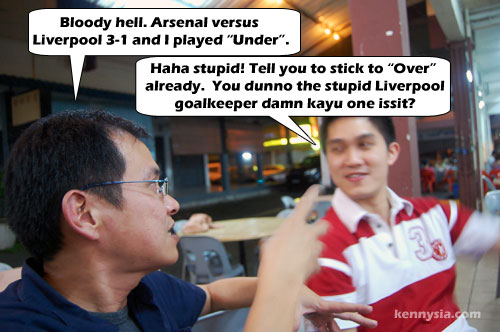 Regardless what you use the Internet for, the truth of the matter is that more and more people these days are getting on the mobile web-surfing bandwagon.
As a website designer, a former software engineer and *cough* trend setter, it is therefore only logical that I create a mobile version of kennysia.com to cater for these people.
And here it is.
I call it kennysia.com Mobile. 😉 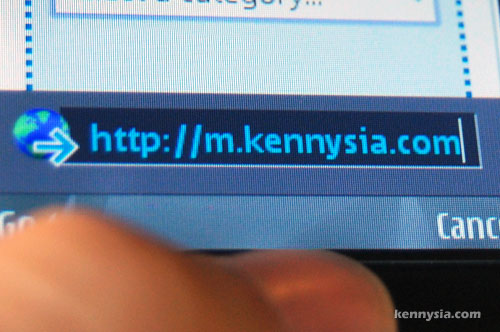 m.kennysia.com stands for kennysia.com Mobile.
It is a reworked version of kennysia.com optimised for PDAs and mobile phones.
The content is exactly the same as the original website, but I scaled everything down to so they can fit the smaller screen sizes of mobile phones.
The best thing about the mobile version of kennysia.com is that it has no ads, no fancy animation, no unneccessary graphics. Not only that, I went through great lengths to keep file sizes low, so everything loads faster on the phones and bandwidth charges are kept to a minimum. 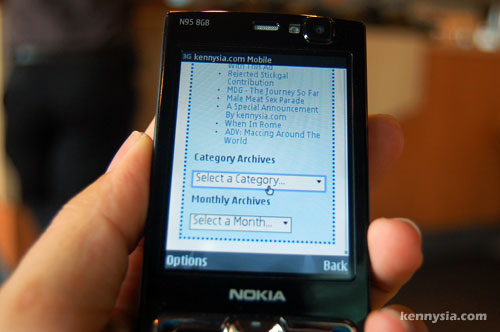 Pretty much all the important features of the original blog is there. All the comments left by readers are there. All my older archived entries since the day I started blogging are there, all neatly sorted by categories and months.
The only thing I left out is the comment box ‘cos I don’t wanna have to worry about spam and such. I also left out the Chatterbox because too many crazy people are in there talking non-stop twenty-four seven. 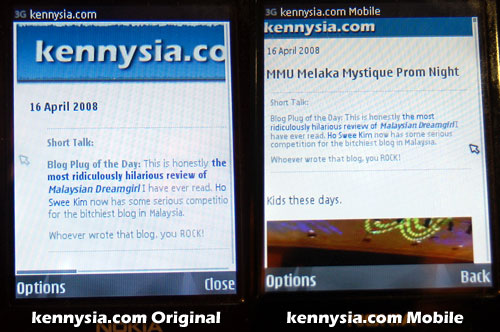 But apart from that, I’m pretty happy with what I came up with.
It took me one full day to do the coding for kennysia.com Mobile, and it wasn’t that hard.
I do hope more Malaysian blogs and websites out there can optimise their content for mobile web browsing though. Sure, nothing beats surfing the web on the desktop right now. But with 3G phones getting smaller, data charges getting cheaper and Maxis 3G coverage getting better, mobile web browsing is definitely the way to go in the future.
And those who aren’t already with Maxis mobile browsing would be left behind. 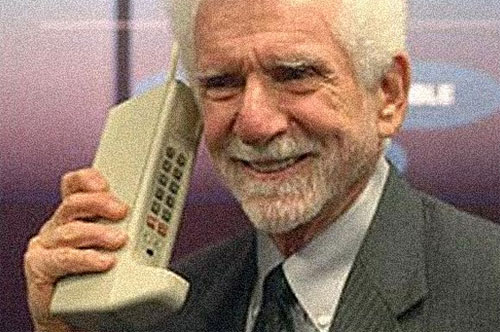 Liang, Malaysia’s most energetic botak AIM-nominated emcee, recently released his music video titled “Tricks”.
Liang is a someone I got to know after we worked the crowd together at the many events he emceed. Most bloggers would know him as the loud emcee at the Nuffnang Pajama Party. He is a great guy in person so of course I’m more than happy to lend him support and publicity.