You know those Japanese Neoprint sticker machines that were all the rage back in the 90s? 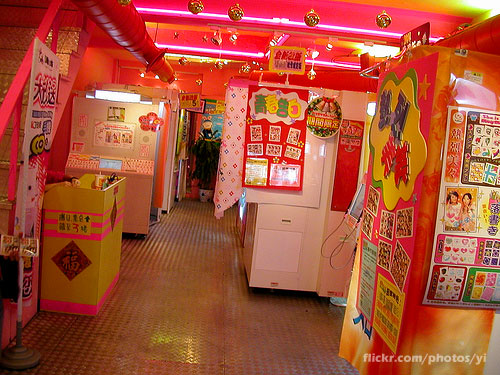 When they first came out, I was so fascinated by them because I could never understand how people could justify spending wasting so much money and stick them all over their books.
Those stickers ain’t cheap at all. For whopping cost of RM25, all you get is a photo of you and your friends badly printed on a pathetically small piece of sticker about the size of two credit cards. As if that’s not small enough, you have to use a pair of scissors to cut the freaking small piece of sticker into even FREAKINGLY SMALLER PIECES OF STICKERS because you’re supposed to share them with your friends. 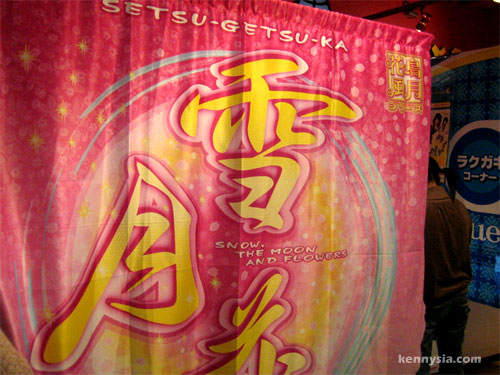 Add to that is the experience of going through the machine and have it guide you in one of those annoyingly cartoonish “kawaii” Japanese voice.
Most of the time, you don’t understand what the hell those idiots are rambling on about.
And when you finally figured it out, the countdown timer finishes and the stupid computer automatically chooses for you an option you didn’t even freaking want in the first place. 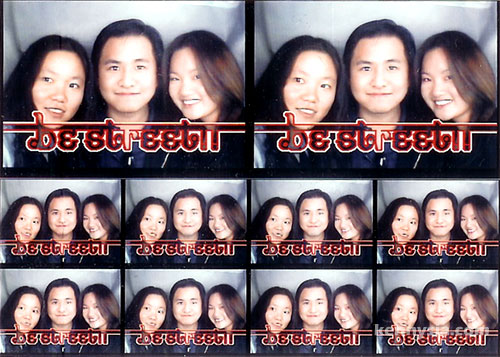 This was from 6 years ago. Damn, I looked like a mannequin.
Despite all that, I’m still really fascinated by these sticker machines. We never had something like that before in Kuching. The only experience I got was during my student days in Australia. Those in Perth would remember this old place next to Billy Lee’s Restaurant in Northbridge that was closed down after a while. 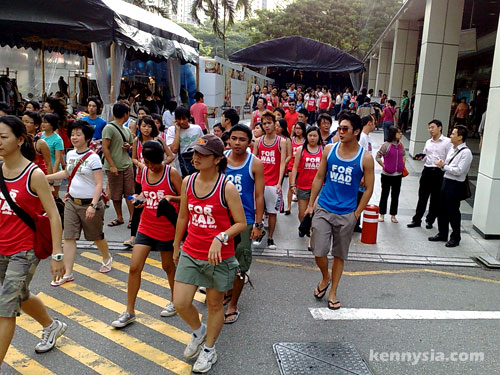 Anyway, I spotted these sticker machines again when I was in Singapore over last weekend. nadnut and I were at Cineleisure (Estee called it “Sini Pleasure”, which made it sound like some dodgy hooker den) and the dazzling pink neon lights attracted us. We went in there on an impulse and plonked SGD$11 on the table.
I was amused by how advanced these machines have turned into. You could even use a touchscreen pen to draw or add icons onto your pictures. How cool is that?
I didn’t know what nadnut was trying to do, but she scribbled some nonsense on her side. Five minutes later, the pictures came out like this. 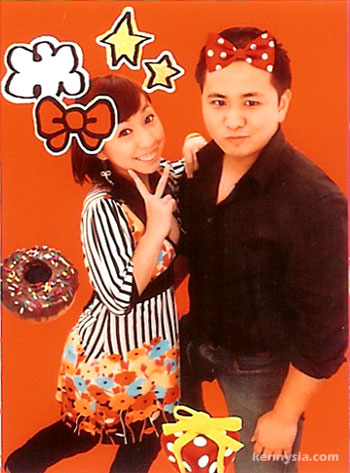 Oi! How dare you! Lim peh is macho man ok!

This was on Hitz.fm earlier this week. Rudy and Junior (subbing in for JJ) were playing this game where they’re asking people to call in to find out their personal “theme song”. I SMSed and asked them “What would be the theme song for Kenny Sia?”
Rudy: What was his latest blog entry?
Junior: The last one I read was about him eating a snake in Vietnam.
Rudy: WHAT! What does it taste like?
Junior: He said it tasted like wheatgrass juice.
Rudy: Ewwww… I dunno man, but I think he need to “get it right” lah.
*’Get Right’ by Jennifer Lopez started playing*