Did anyone manage to catch me on Channel [V] this week? 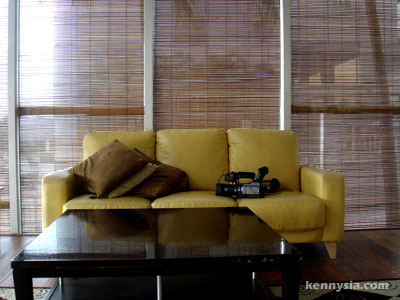 Apparently I was on this new programme called ‘Poparazzi’. They called me into the studios to do the shoot when I was in KL before I flew out to Phuket.
It’s about my letter to Osim I did a while back on their weight loss ads. Well, it’s been 4 months now and I never even got a reply from Osim. Blardy hell, those wimps! 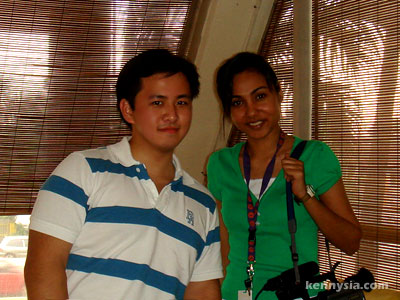 Channel [V] wanted to help me out by making a call to Osim direct and asking them to comment on my letter. I don’t think I’m the only one curious to see what their reply is gonna be.
Too bad I didn’t manage to catch the show because everytime it’s on air I’m either working, in the gym, or sleeping. Possibly all three at the same time.
Would someone out there be so kind as to record the show for me? I do have a tape recorder… but it’s been abused so much throughout its 9 years that right now just a very expensive and ugly decorative piece of shit sitting in my lounge room. I think the replay will be on 10:30am today (Saturday), then MAYBE 3am and 11am on Monday, so keep a look out yea?
In other news, you all should really grab this month’s copy of KLue magazine. 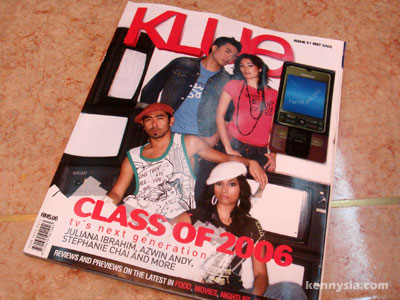 Why, you ask?
Not just because hot Kuching lass Stephanie Chai is on the cover, but because yours truly is debuting my first ever regular column for a magazine! 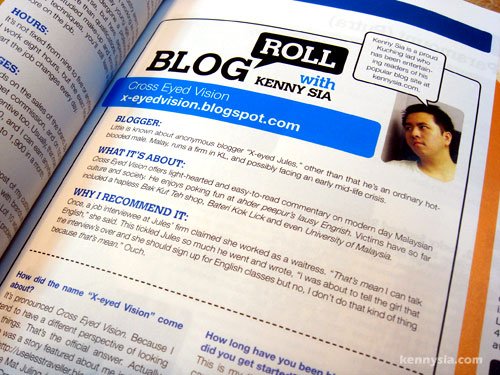 Wow. Never in my wildest dreams would I imagine that people would actually PAY me for two thirds of a page of my crap.
“Blog Roll” is a column showcasing the best, worst and ugliest blogs in Malaysia. There’s a lot of them here and of course, I’m more than happy to uncover the hidden gems of the Malaysian blogosphere. The lucky first is Jules from x-eyedvision.blogspot.com, an anonymous blogger who I think writes one helluva funny, intelligent but underrated blog. 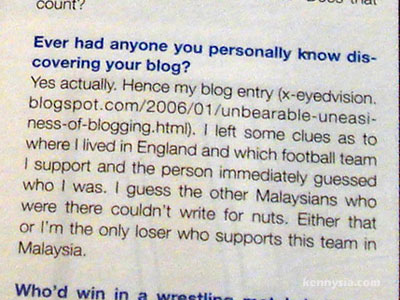 There’s a lot to like about this guy, such as his episode living with two gay housemates in the UK, among others.
Anyway, there’s gonna be a lot more recommendations from me in the future, so buy the mag and stay tuned yea? Personally I’d prefer them to have screenshots of the featured site instead of just my mug shot. A bit vain right? That’s something I need to sort out with them. 🙂 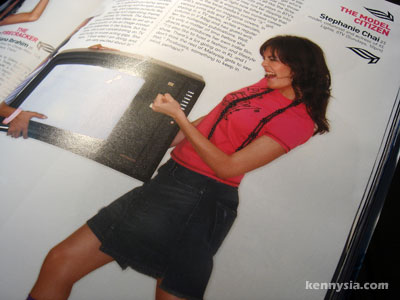 I tell you, Steph Chai and Kenny Sia on KLue – that’s a double whammy for Kuching! Hell, there’s so much Kuching in this month’s issue they should rename the magazine KCHue.
Then no one will buy.

Blog Plug of the Day: KLue blog. Don’t read this on an empty stomach.