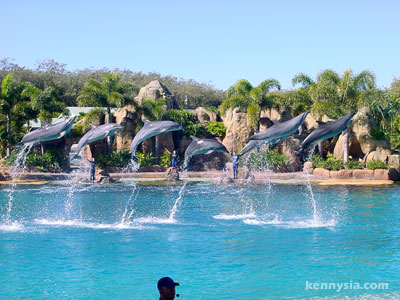 One thing though. If you’re hoping that the dolphins we have in Kuching are ANYTHING like the ones you see on Gold Coast that can jump through hoops, do tricks and win Olympic gold medals in gymnastics; then sorry lah my friend. You’ll be sorely disappointed.
The dolphins we have in Kuching are Irrawaddy Dolphins. Part of the reason why not many people bother about them is because they are possibly the most boring dolphin species EVER. 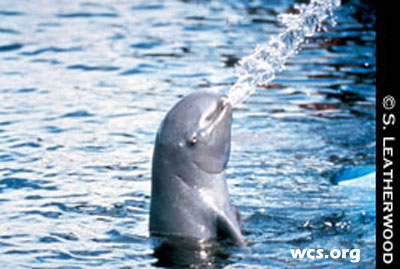 Look at it. They are nothing like those dolphins you see in Hollywood movies which are all playful, cute and cuddly. Our Kuching dolphins are so damn freaking ugly they are like the Furong Jiejie of dolphins. 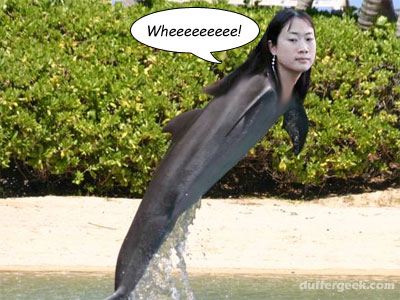 When Francis told me about it, I was skeptical.
Yes, Francis, there are dolphins in Kuching. And there are penguins eating kolo mee in Sekama too.
I thought this Francis must be nuts. Maybe he kayak too much, his wife not happy and whacked him in the head with the kayak paddle. Nonetheless I was still interested and curious about these “Kuching dolphins”. 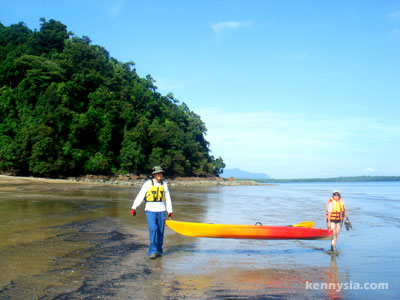 Francis proposed that we go dolphin watching on a kayak and we agreed to meet up during the Tuesday public holiday. Joining us were Peggy from World Conservation Society in New York and the dolphin expert Wayne from BorneoTravel.com.
Together, we are the Oarsome Foursome. Hur hur. 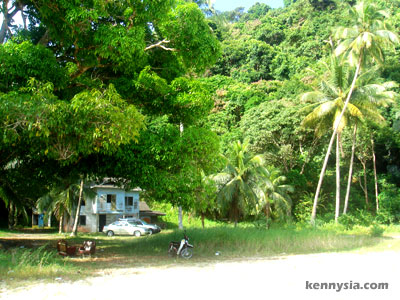 The weather that day was simply perfect. And it turns out we don’t even have to travel far to go dolphin-watching. 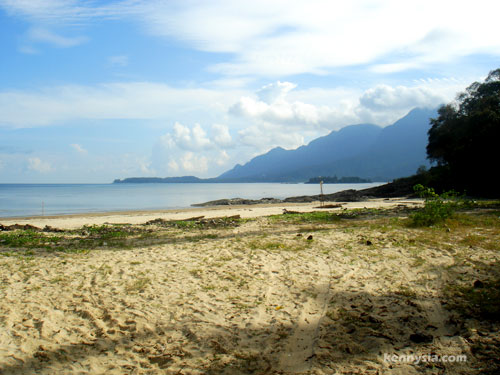 Wayne brought us to an abandoned private beach in Santubong – just 40 minutes away from the city and a short distance away from the Damai Beach resort area. Dolphins in Santubong? Now I’m even more skeptical.
By the way, this marks the second time I kayak, and the first time I had to paddle a one-person kayak into an open river. 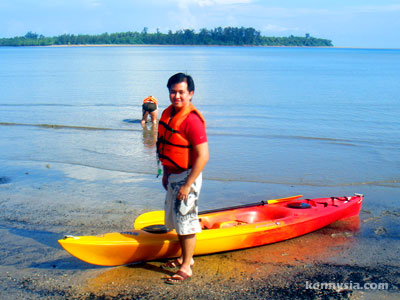 After a false start, I managed to get my body into the kayak. Along with two muddy feet. 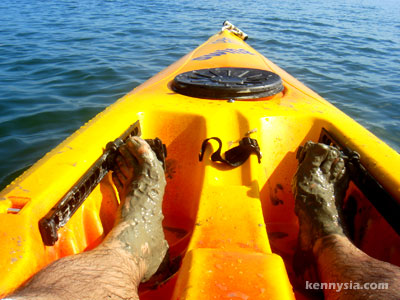 We were paddling aimlessly for about half an hour or so in the Santubong River and there wasn’t any signs of dolphins around. I was disappointed, though I wasn’t exactly expecting to see any to begin with.
Irrawaddy Dolphins are after all listed as an endangered species, so it’s likely less than 0.1% of the Kuching population has seen one. If you can spot one in Kuching, can buy 4D liaw. 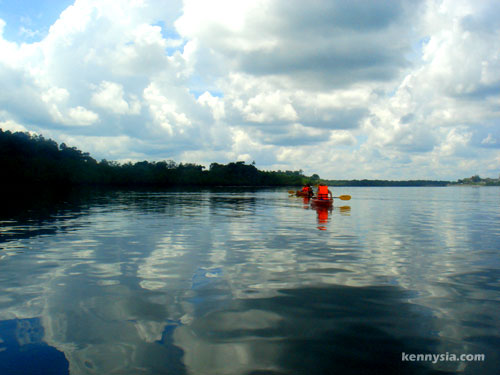 I joked to Francis telling him that if we couldn’t take photos of the dolphins, I’ll just photoshop some up so people would believe us. Then we heard it.
“Over there!” Peggy yelled out to us. We stared at the general direction she was pointing at, and we saw this. 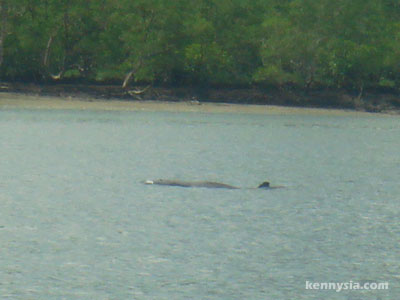 We were so excited we nearly creamed our pants.
The four of us quickly paddled towards the dolphins, probably scaring them off in the process. It wasn’t until much later when we learnt how to approach the dolphins cautiously that they begin to warm up to us. And when they come in groups, boy, do they come in large groups. 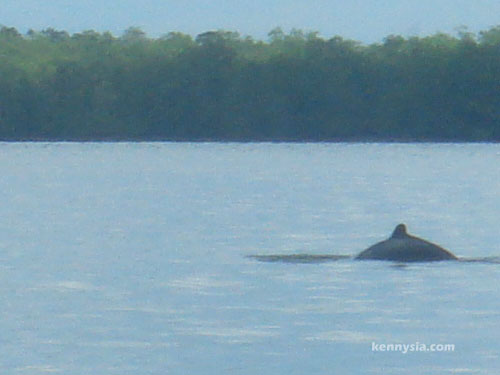 At one point in the water, we were quietly sitting on our kayaks and four different groups of dolphins were encircling us. Each group probably around 10 dolphins. There were no propellers, no noise, no sounds of paddles hitting the water. 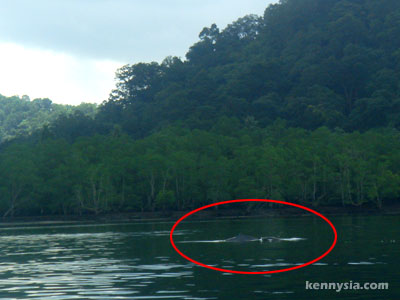 Just the four of us, silently watching dolphins swimming from all around us, rolling up gracefully onto the surface, sprouting jets of water off their backs before diving back down again. They look so tame, so harmless in the nature.

It was an amazing experience of sight and sound. Words cannot do justice to how magical it was to be so close those rare and elusive dolphins of Sarawak in the wild. And I take pride in knowing that I’m one of the first few to be watching these gentle mammals from a kayak.
To me, it sure beats watching stupid dolphins jumping around in Sea World. 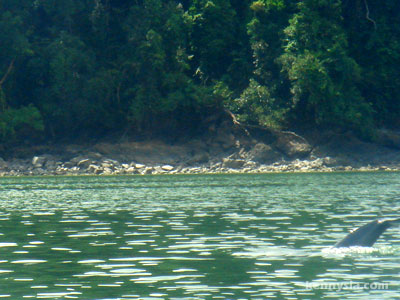 For more information on dolphins in Sarawak, visit Wayne’s blog. Or try your hand at kayaking with Francis Ho.
Kuching is a great place. There’s no other cities in the world I know of that allows you to watch wild dolphins frolicking about in their natural habitat without travelling miles away into the countryside. For now, we still have the privilege of watching these endangered dolphins off the shores of Santubong. 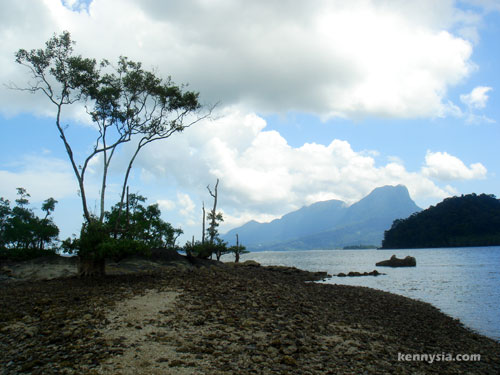 That’s a privilege we should make full use of. At least until they decide to build more resorts around the area and scare all the dolphins away with pollution.

101 Replies to “Dolphins In Kuching”