I realised I haven’t yet blogged about the trip to Vietnam I had last year. 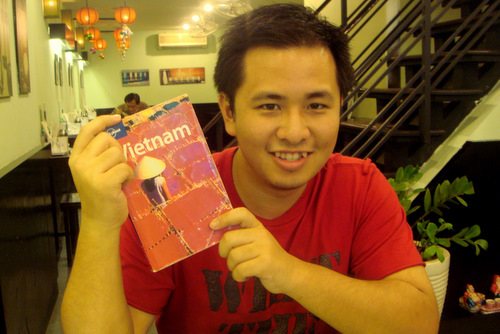 You can obviously tell that the trip was from a long time ago because that pic was from when I still had hair.
Actually I had wanted to blog about this trip earlier, but as soon as I returned from Vietnam, Israel launched an attack Gaza. A lotta people were getting emotional as a result. Considering I couldn’t blog about Ho Chi Minh City without mentioning the horrors of the Vietnam War, I decided to put the entry on hold.
Until I kinda forgot about it. Hehe. 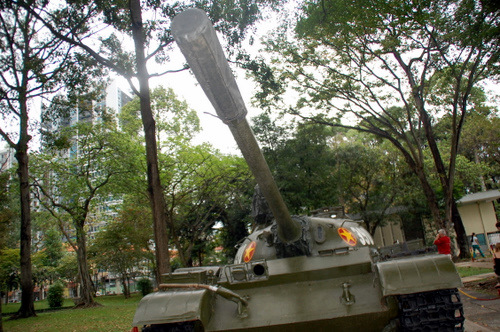 There is a reason why people described George Bush’s war in Iraq as a repeat of the Vietnam War.
Back in the 1960s, Vietnam was split into two halves, the communist north and the democratic south. 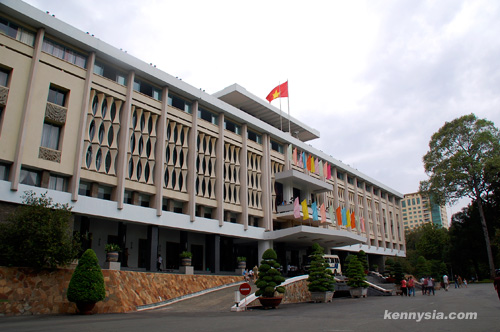 The Americans weren’t even involved in this conflict at first. But because this was during the height of the Cold War, they were desperate to “spread democracy” and rid the world of communism in order to assume world domination. 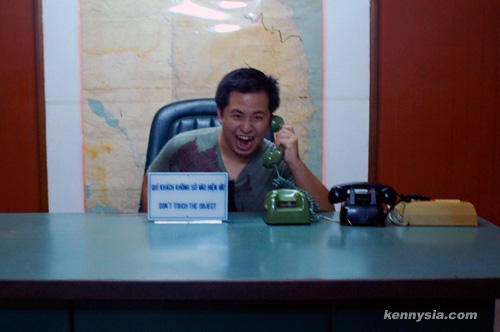 So they sent in their troops into Saigon help the South Vietnamese fight the war, thinking that it’ll be an easy victory since they have bombs, tanks and planes. All the North Vietnamese had back then were primitive sticks and stones. 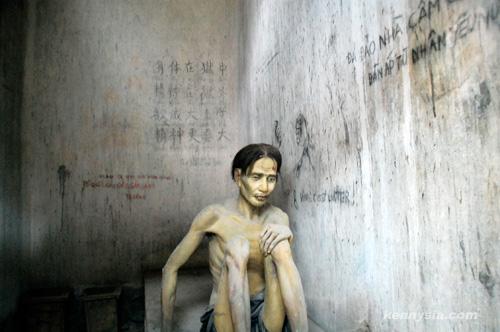 What the Americans thought was gonna be a swift one-sided war turned ugly when the they find themselves ambushed repeatedly by pro-communist soldiers and civilians alike hiding inside tunnels and Vietnam’s thick jungles. The Americans responded with more shock-and-awe, poisoning jungles with Agent Orange, wiping out villages with napalm bombs and indiscriminately killing innocent women and children. 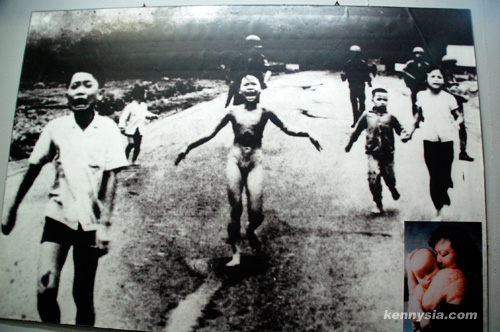 By the end of the war, half a million 50,000 American troops perished and millions more Vietnamese from both sides suffered casualties. American troops were forced to leave Vietnam due to pressure from the hippie movement, and this immediately paved way for the North Vietnamese to capture Saigon and renamed it Ho Chi Minh city. 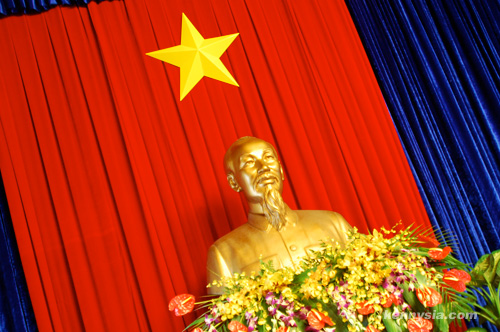 I gotta be honest here.
I didn’t enjoy Ho Chi Minh City. I loved Hanoi to bits when I went there two years ago, and I thought HCMC would be something similar. Instead, we were confronted by depressing sights everywhere we went. 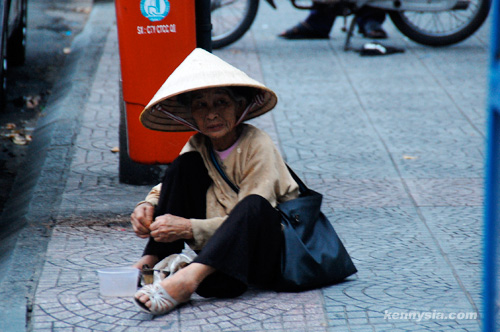 The museum we went to that showcased photos from the war in particular brought our spirits down and made us feel so depressed. It’s almost as if we paid for this holiday just to feel depressed. 🙁
Even the sight of this grown man holding onto his massive collection of colourful balloons didn’t cheer us up. 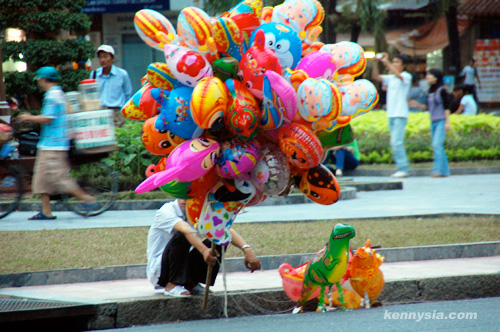 I think part of the reason why I lacked enthusiasm had to do with the fact that we got ripped off like 3 hours after we touched down from the airport.
My travel partner Nadia and I were at a market 5 minutes away from our guesthouse, and we decided to take a cyclo (Vietnamese version of a trishaw) back. 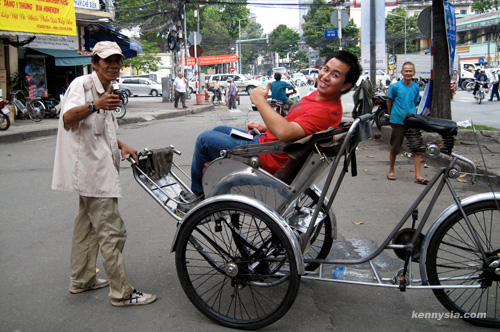 One of the riders approached us and asked 30,000 dong (RM 6) for the trip. Seems reasonable.
After they dropped us off, suddenly they asked for 300,000 dong (RM 60)! How can a freaking 5 minute journey on a bicycle cost RM60?!
For that price, I would’ve expect the cyclo to be made from Louis Vuitton or something. 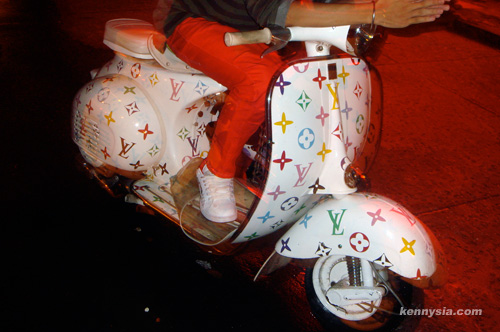 Obviously we refused to pay lah. Some more kena blamed for hearing him wrongly. In the end, I got so pissed off that I just gave them 100,000 (RM 20) and scurried away.
I wasn’t happy, but I told myself that I can’t blame them for trying to scam us.
Many of these cyclo riders were in fact educated doctors and lawyers before the Vietnam War. Because they were anti-communists, their homes and possessions were all taken away when the communist government took over. They were outcasted and not given work permit, effectively forcing them to work illegally as cyclo riders who run around overcharging tourists. 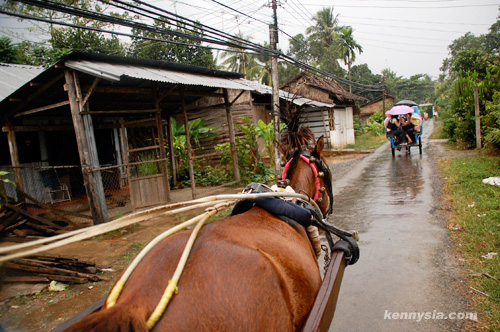 We couldn’t stand HCMC any longer, so Nadia and I booked a day trip for a visit down the Mekong River on our second day. 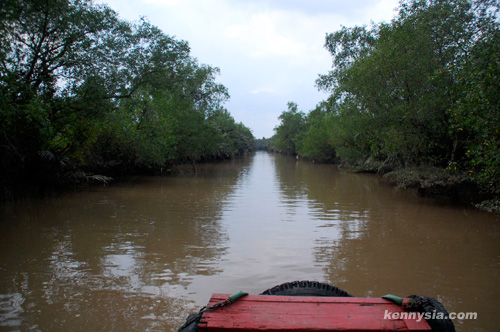 It was a pleasant getaway from the noise and chaos of the city, but we still couldn’t escape from the mechanical tourist traps they set up for us over there. We went to one village, they showed us how to make spring rolls. 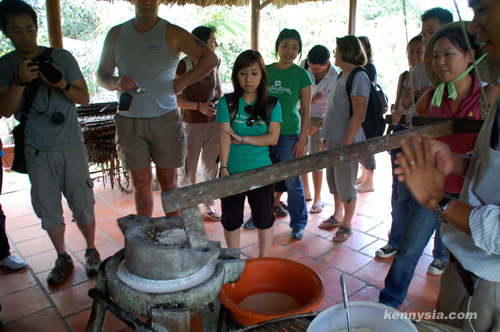 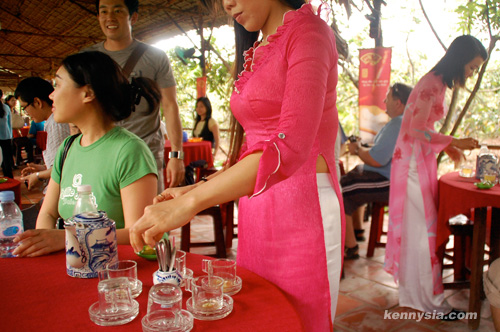 Then finally they made us all sit down to listen to our waitress sing some ridiculous Vietnamese opera songs while they asked for more tips!

By the time we return to HCMC, it was 8pm and we were pretty hungry. So Nadia and I walked over to this French restaurant recommended by my Lonely Planet guidebook.
It was the most interesting French restaurant experience I’ve ever had. And I don’t mean in a good way! 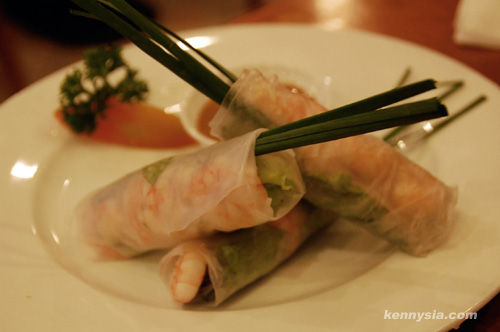 The food wasn’t bad – it was okay.
The experience was interesting because while we’re at the restaurant, the ASEAN Cup grand final between Vietnam and Thailand was going on and all the waitstaff were literally glued to the TV. That’s fine. Nadia and I can entertain ourselves with miniature Vietnamese flags while we’re being ignored. 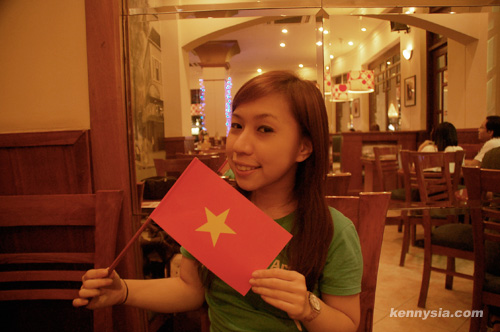 But then something unexpected happened.
During the game, Vietnam scored a late goal and became ASEAN Cup football champions for the first time in history.
Within minutes, thousands of revelers in motorbikes clad in patriotic red screamed, danced, raced through the streets to celebrate their victory. 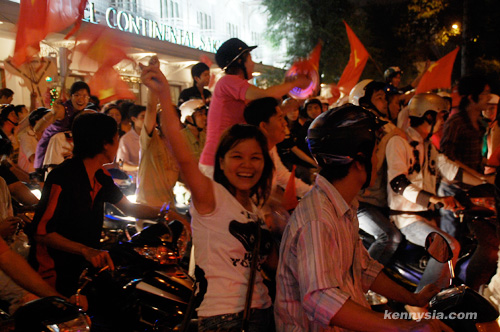 It was all fun and games at first, but the excitement quickly degenerated into something scary. We finished our dinner and wanted to go back to our guesthouse, but then it suddenly dawned on us that there’s no chance in hell that we could get a taxi in this kinda situation. 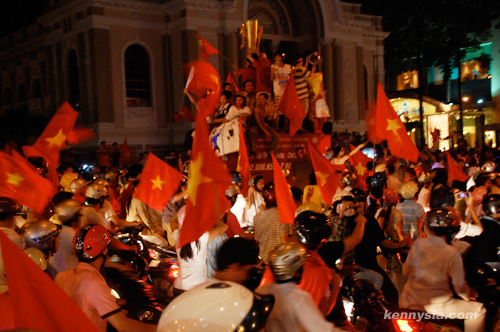 With the crowd showing no signs of subsiding, we took refuge in a nearby rooftop bar. 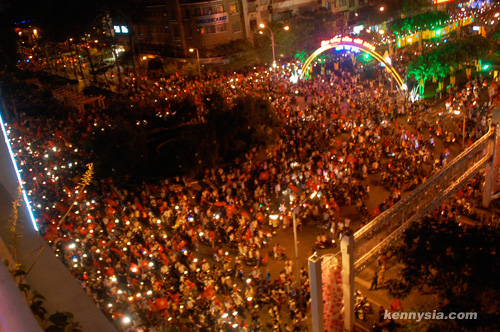 You will NEVER see Malaysians celebrating on the streets so crazily like that. Not because we are disciplined people, but because our football team is totally hopeless! Two hours had gone by and still people were clogging up the streets!
We were tired, sweaty and smelly. Eventually we decided to put our lives at risk and walk some 40 minutes back to our guesthouse, narrowly avoiding becoming motorcycle roadkills along the way.
Till today, I wondered what a miracle it was that we even made in back in one piece. 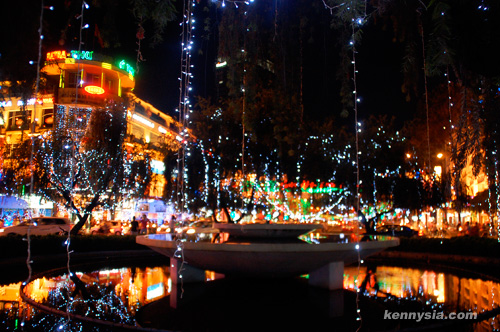 Apart from those annoyances though, I still think Ho Chi Minh City is a beautiful place. I especially enjoy admiring the architecture of their buildings. 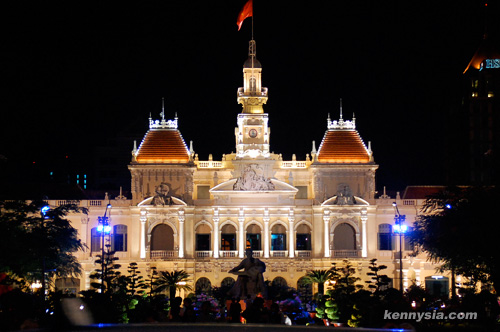 The buildings in Ho Chi Minh City are very unique for a city in South-East Asia. Decades of French colonization resulted in many of their buildings having a chic Parisian flavour to it. In fact, it’s almost as if some of their buildings were directly imported from Europe.
They got their own Notre Dame Cathedral. 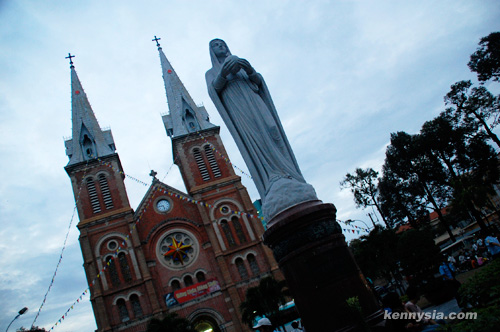 Even their own Toni&Guy hair salon. 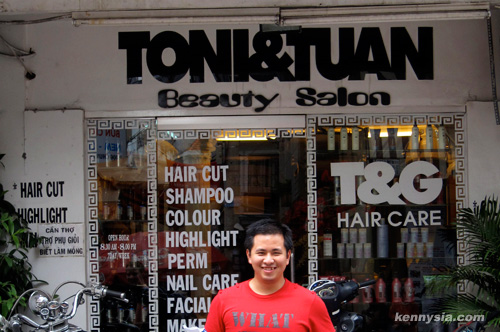 Wait a minute, that is not Toni&Guy.

Quote of the Day: “Women show off their cleavage so that good-looking men can look at it, and so that average-looking men can glance at it discreetly, and as for less-than-average-looking men, please try and keep a low profile – it only takes one misstep to earn you a reputation as That Creep From The Party.” — Elaine of antithesis2.net
Damn sad, but damn true.
This rule applies to all girls, except Zhang Ziyi, in which case you are allowed to implant your face firmly in between her buttcheeks if you are a rich middle-age Israeli tycoon.