After spending four days in Paris, we began to get a pretty good idea how to pronounce certain words in French. 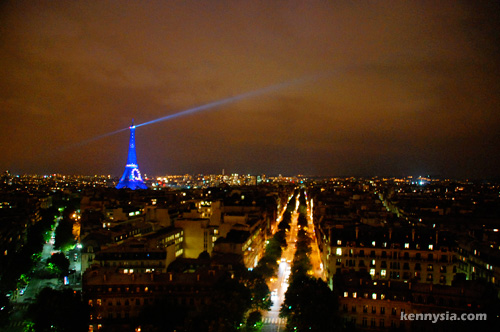 View from the top of the Arc du Triomphe

The golden rule of thumb here is that we should never pronounce French words the same way as they’re written in English.

That’s one reason why I will never be able to date a supermodel. I’m most definitely gonna EPIC FAIL when it comes to pronouncing all those difficult French designer names. 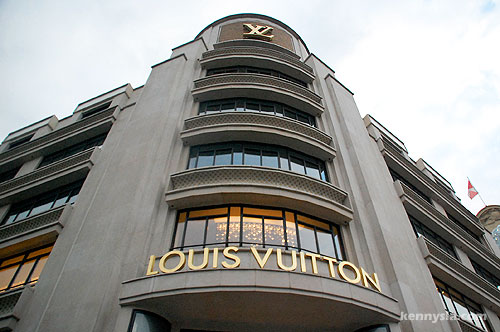 You can’t blame me really.

My English teacher never taught me that Louis Vuitton should be pronounced as “LOO WEE VOO TONG”, not “Loo Wiss Vooi Teng”. 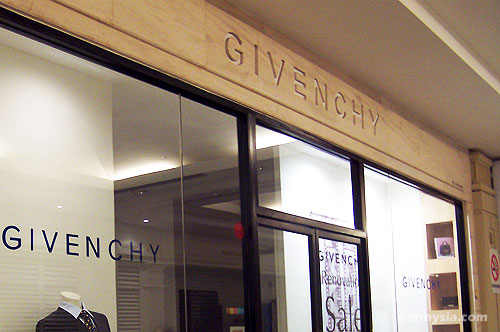 Givenchy is pronounced “ZHEE VON SHAY”, not “Give Wen Qi“. 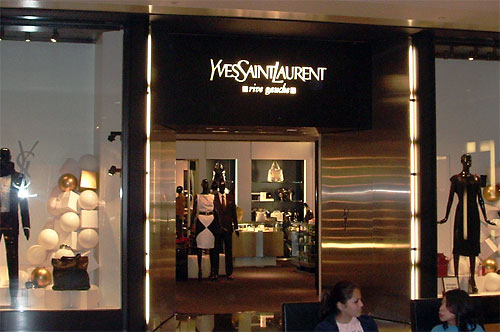 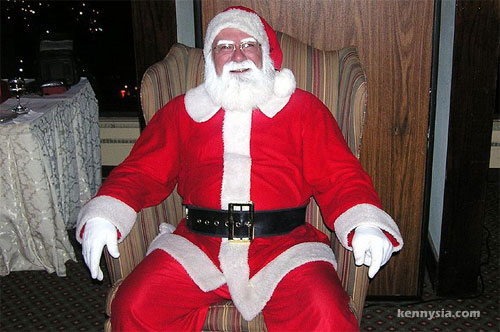 Anyway, we ate at a Chinese dim sum restaurant in Paris one day and to our pleasant surprise, the Chinese immigrants here actually speak very fluent French! 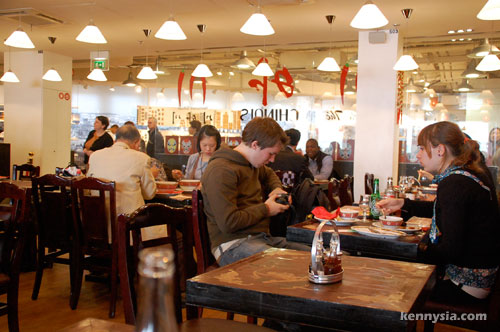 If those PRCs can speak French, then it shouldn’t be too difficult that a native Chinese speaker like me to speak French too, right? 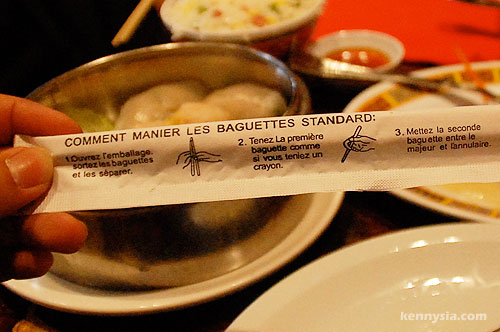 I did a bit of reading, and apparently A LOT of French words sound awfully similar in Chinese. Seriously!

Lemme give you a few examples.

“Bonjour” is good morning in French.
In Chinese, it’s ??.

“Bon Soiree” is good evening in French.
In Chinese, it is ??. 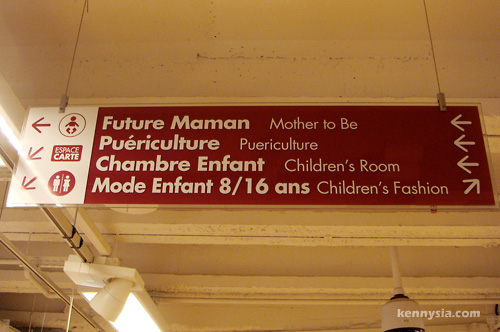 See? It’s not that difficult to master French after all. If the Chinese can speak it, so can we.

We just have to observe a few rules when we’re speaking the language. 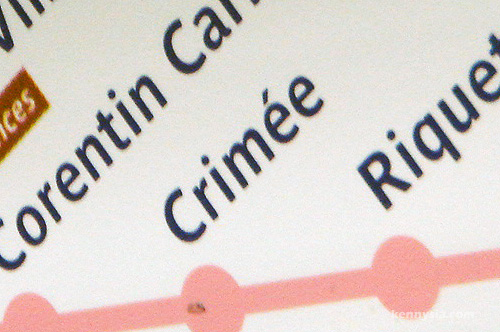 Kenny: How do you pronounce that word? ‘Crime’?
Dawn: No, I think it’s pronounced ‘creamy’. 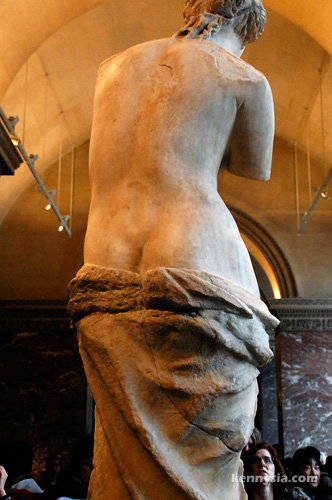 Their ass at the end also not pronounced at all! 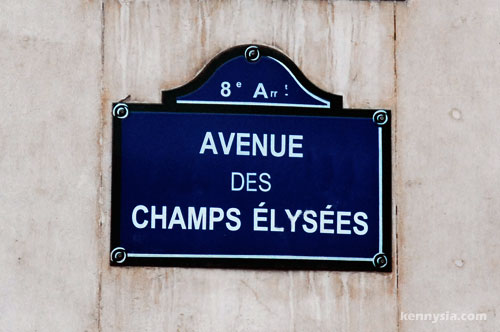 For the whole four days we were in Paris, I have absolutely no idea how to pronounce those words.

Among other atrocities, I have pronounced it “Champs Ee Lee See”, “Chomp Eh Lai Sees”, but the worst thing I did was calling it “Cham Ee Leh Sai”, which sounds like some disgusting toilet mixture in Hokkien. 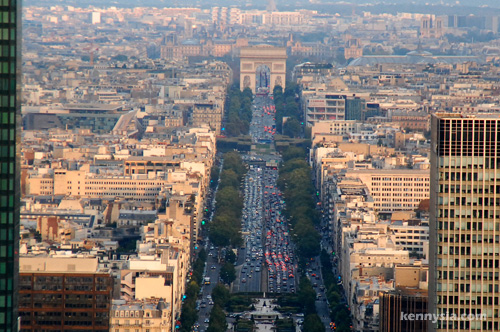 To give credit where credit is due, it is indeed the most beautiful shopping avenue I have seen anywhere in the world. Bar none. 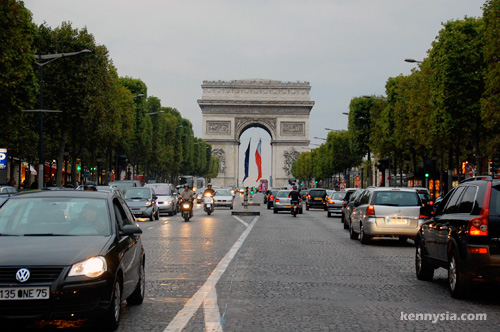 Many cities around the world have attempted to duplicate the romance, beauty and liveliness of Champs Ã‰lysÃ©es on their shopping street. Many have failed.

Bukit Bintang in Kuala Lumpur, Orchard Road in Singapore, Nanjing Lu in Shanghai, Swanston Street in Melbourne are all wonderful shoping streets in equally great cities. But none of them even came close to the original and best. 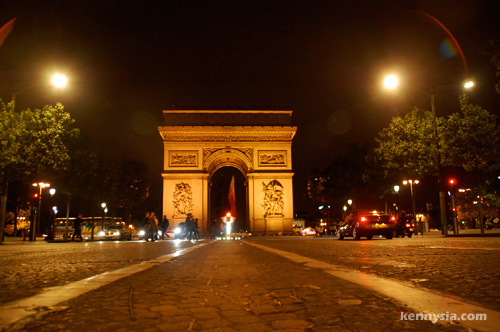 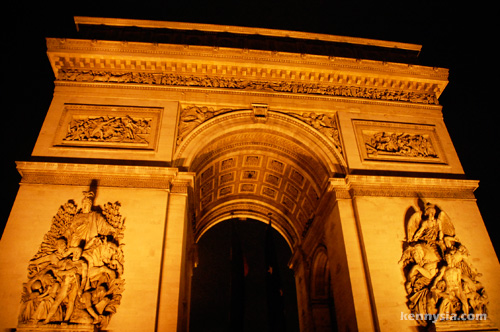 Another thing equally massive and monolithic on the Champs Ã‰lysÃ©es is the flagship store of Louis Vuitton. 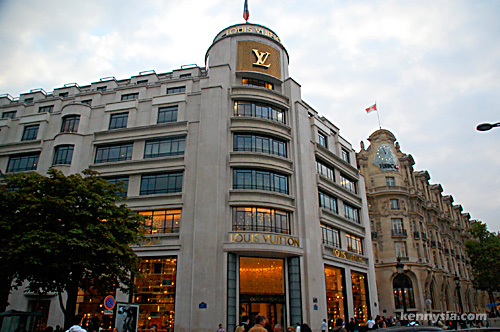 It is so big, it’s absolutely mind-boggling. We’re talking about a six-storey high building stocking everything LV in the largest Louis Vuitton boutique in the world.

This must be what the tai tais and Datins imagined HEAVEN to look like. 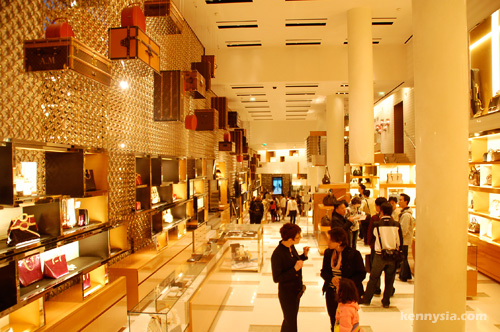 Even more mind-boggling are the prices of the goods inside. 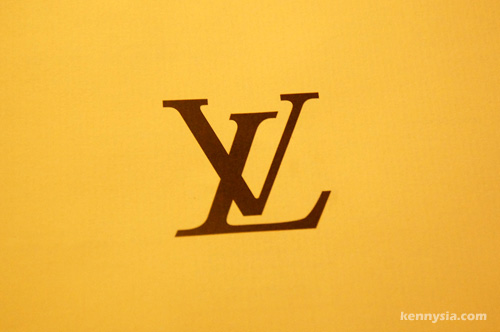 Why the hell would anyone wanna spend 170 Euros (RM850) on a small plastic keychain just because it has the words “Louis Vuitton” on it? It baffles me.

The SAD thing is? Everyone around me were pulling out their credit cards like crazy to buy.

There’s even a freaking queue at the cashier terminal. 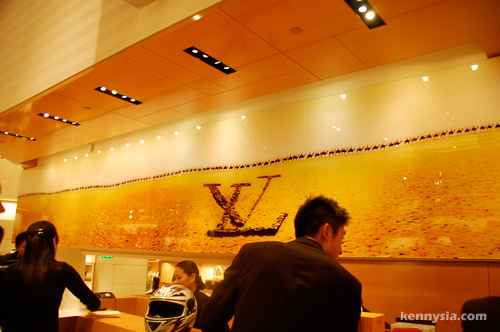 The even SADDER thing is that I thought Louis Vuitton has some of the ugliest bags in the world.

Hasn’t anyone gotten sick of the ubiquitious brown-coloured LV monogram handbag already? Why would anyone still wanna buy something so overrated and overpriced? 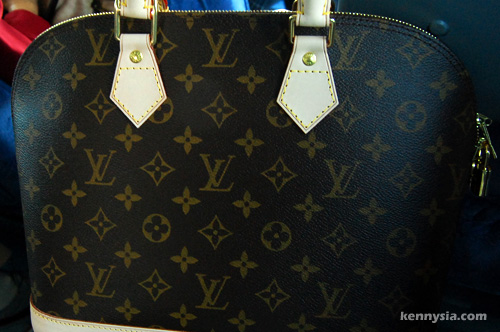 The cheapest handbag I saw in there must be about 600 Euros (RM3,000) and to be honest, it didn’t look any different than a RM150 imitation you could get in Petaling Street.

If you’re a tai tai already living the lifestyle of the rich and famous, surely you can still pull off a fake handbag that costs 5% the price of the original and nobody is gonna question ya.

If you’re an auntie who is so thrifty that you steal the spoons and forks from MAS planes, then even if you’re carrying a real RM3,000 LV bag, people are still gonna think that it’s a fake. 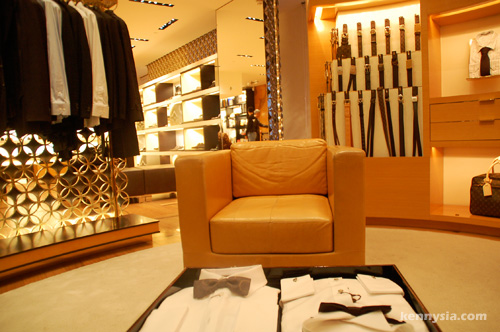 But you wanna know what is the SADDEST thing?

Despite me thinking that LV is ridiculously overrated and overpriced. 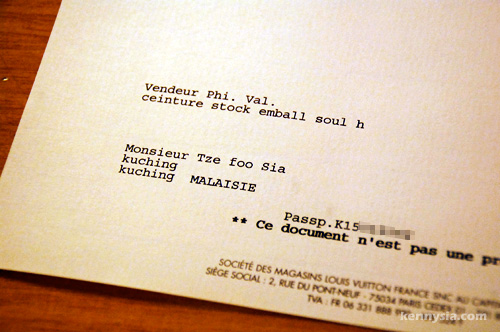 I still ended up buying something from there in the end.

Sorry! I couldn’t help being caught up by the excitement and prestige shopping in a Louis Vuitton store in Champs Ã‰lysÃ©es. After all, it’s not everyday I get to go to Paris. 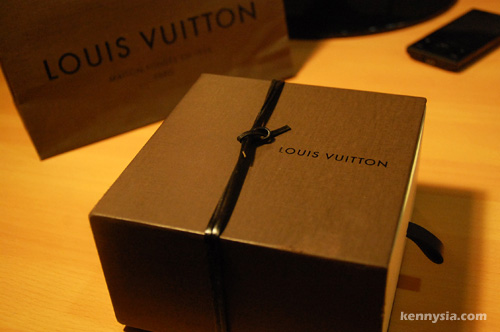 It is the first time I have ever spent money on a Louis Vuitton product. I had bought it as an encouragement for me to complete the 42km Singapore Marathon I’ll be doing in 5 weeks time.

The belt is still in the box and I haven’t opened it yet. My bet for myself is that if I finished the 42km, only then I’ll open the box and wear the it like a champion belt. But if I didn’t finish, then I guess I’ll have to suck it up and give it away as my punishment. 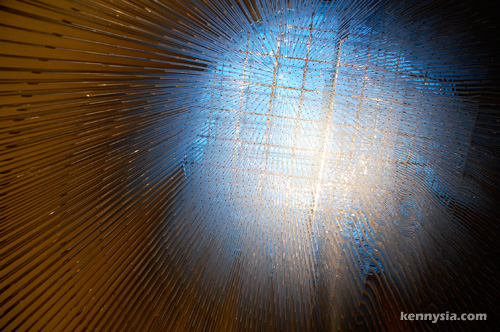 Even if you have no intention of spending any money there, the Louis Vuitton flagship store is still a worthwhile place to explore. It is a tasteful and well done part shop, part exhibition space befitting of such a global luxury brand. 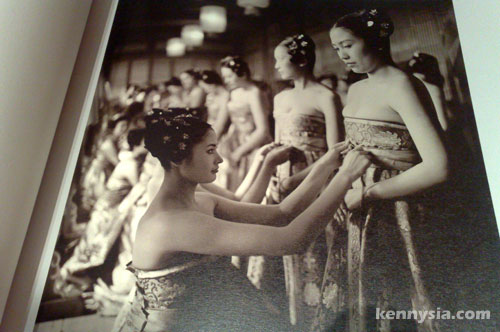 This one is from the set of Curse of The Golden Flower.

Never knew Chow Yun Fatt could handle a camera so well. The actor apparently has a habit of taking his SLR camera around on his film sets. The photographs he took was eventually compiled into a book, then commissioned and published by Louis Vuitton. 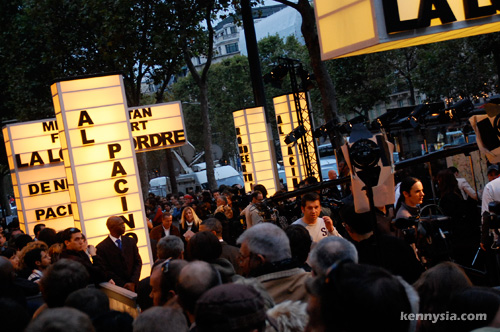 On my way out from the LV store, I noticed a huge crowd gathering outside Le Lido across the road. 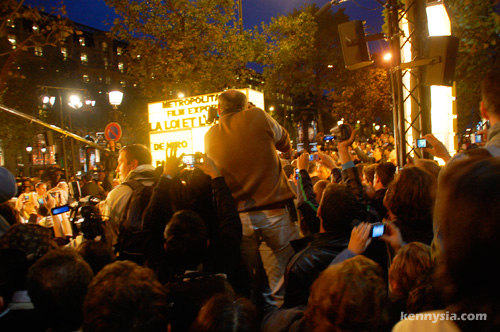 I went over to have a closer look when I realised it was a red carpet premiere of the movie Righteous Kill. Or in French, “La Loi Et L’Ordre”.

And guess who I spotted there? 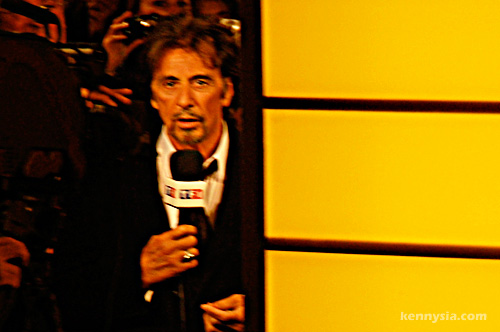 Did I miss something?

I am all for freedom of speech, but since when did it become alright for bloggers to rudely invade people’s privacy and viciously spread it all out online? Is it alright for morally-questionable blogs like The Gutter Post or The Cheongsam Lover to exist? Do people actually enjoy revelling in the misfortune of others? Or am I being old-fashioned here?