The owner of this nail salon must’ve got her inspiration during a boink. 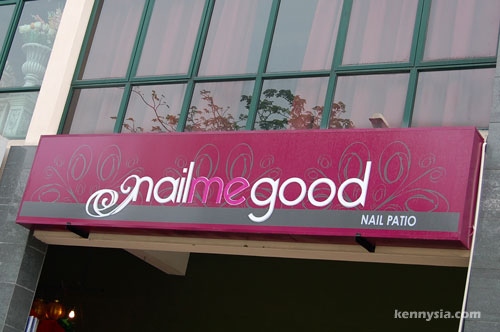 Or more likely, she just didn’t know the double-meaning of the word “nail”.
Who the heck calls their nail salon “NAIL ME GOOD” anyway? Now we know all her customers will be going to her salon to get nailed good. Real good.
Hey! Maybe next, she’ll open a massage centre, called “BANG ME HARD”.
*~*~*~*~*~*~*~*~*
P/S: I take what I said earlier back. Waddya know? It wasn’t obvious to me at first, but turns out “Nail Me Good” was deliberately named as such to be tongue-in-cheek. The ladyboss said so herself. Go check out her blog at fionamarcusraja.blogspot.com.

I never knew shooting stray dogs is legal in Malaysia, but apparently it is so in Taiping. Their town council hired some guns to kill stray dogs and some poor guy kena shot instead.
And people call me cruel for eating a snake.