Everyone wanna be Irish on St Patrick’s Day. 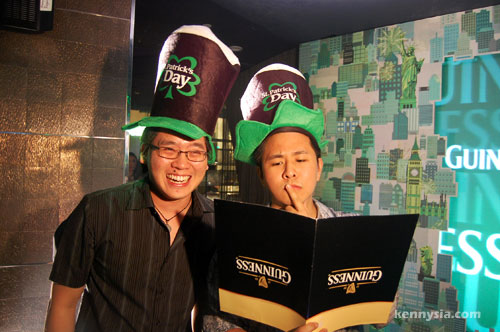 Even if you’re just a poor clueless little Malaysian.
St Patrick’s Day on the 17th March is a holiday originating from Ireland, where the Irish feasts all day long to commemorate the death of their heroic patron saint. Legend has it that good ol’ St Pat banished the snakes from Ireland and into the sea, thereby saving Ireland from certain doom. 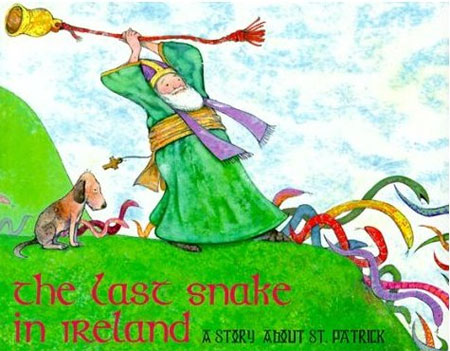 Not much is known about the snakes after they’ve been banished into the sea.
But I’m pretty sure those snakes swam across the ocean into Malaysia, where they eventually grow up to become Petaling Street vendors.
No wonder they always try to rip people off! 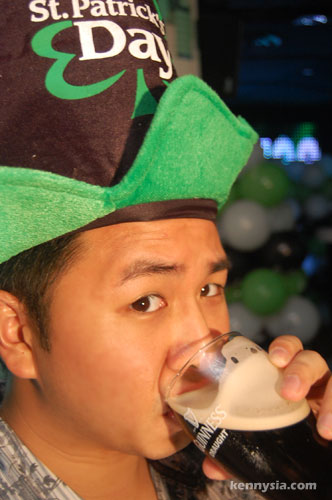 Still, it was funny how last time when St Patrick caught snakes he was regarded as a hero.
Nowadays if we try to “catch snake” during working hours, we get scolded by our bosses.
Ridiculous. 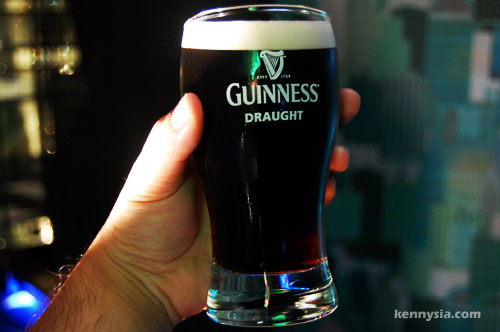 Anyway, I was invited by the good guys at Guinness for the media launch of their St Patrick’s Day celebrations in KL. With good food, good company and freeflow of Guinness Draught offered all night long, of course I jumped at the opportunity lah!
The event was to kick-start a month-long celebration of all things Irish and Guinness. After enjoying such immense popularity worldwide, Ireland’s favourite black beer is bringing the spirit of St Patrick’s Day to Malaysia.
And I think it’s fair that they bring St Patrick’s Day to us. After all, we gave them like… Chinese New Year? 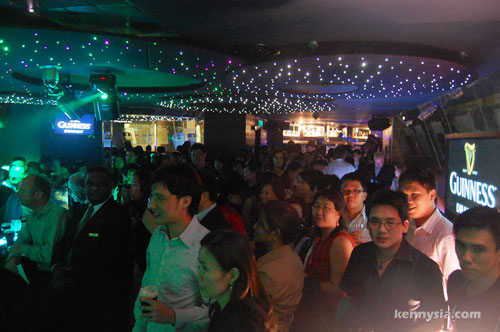 The evening was cheery and jovial despite it being a media event. We were served not just Guinness Draught, but a nice selection of sushis, nachos and quiches as well. Truly international!
Even the Guinness Draught served that evening was unique. The ice-cold beer was poured into the glass, then placed on a special surger unit to create “the perfect pint” – black at the bottom, and a creamy layer of froth on top. 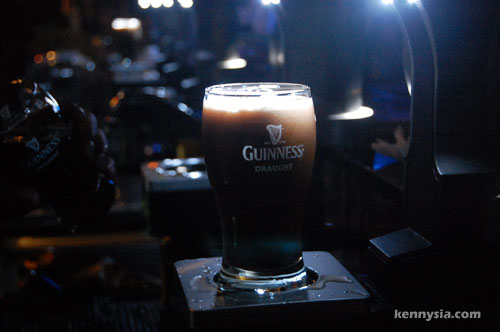 Halfway through the celebrations, a bunch of dancers came out wearing some outrageous hats with famous buildings on them, to signify how St Patrick’s Day is celebrated internationally. 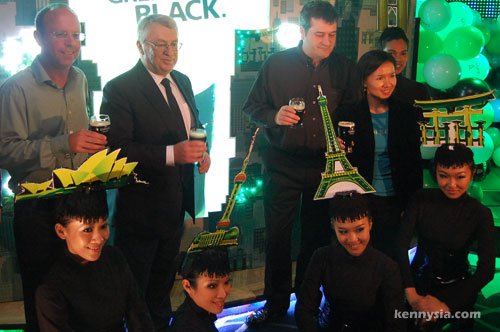 Sorry lah, but the last time I had to wear something like that on my head was when my teacher punished me in primary school. 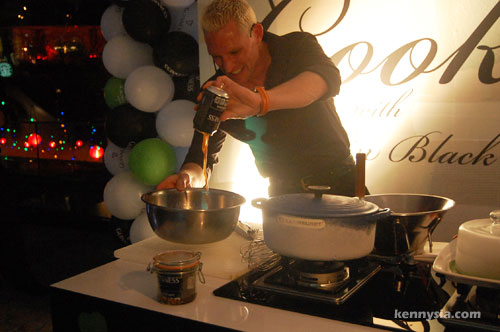 Fortunately, the real part of entertainment that evening came later, when Emmanuel Stroobant from AFC’s Chef In Black showcased his culinary skills in front of the live audience.
The celebrity chef was tasked with coming up with a dish using Guinness as its key ingredient. It was really quite amazing to watch how he did it. I thought the guy is simply gonna pour Guinness on a rack of lamb and just say, “Nah, that’s your dinner!”
But no. 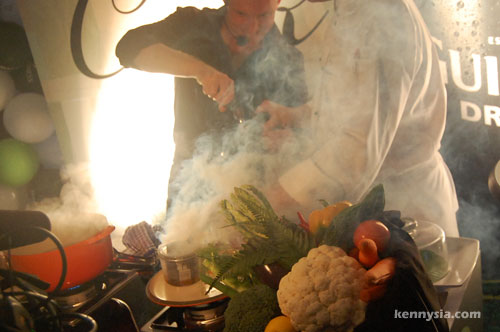 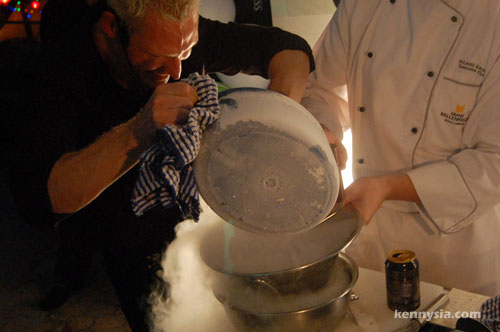 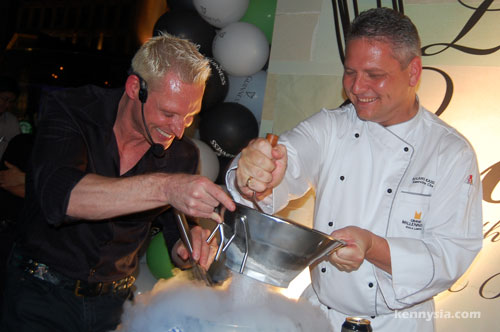 He ground it.
Chef Emmanuel’s cooking demonstration sure beats me trying to cook Maggi. 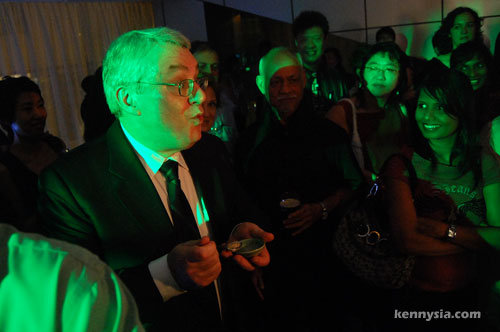 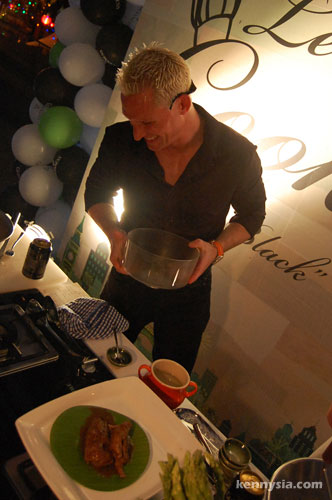 The good news is, throughout the whole of March only, everyone can enjoy these good Guinness infused cuisine at participating outlets throughout KL. 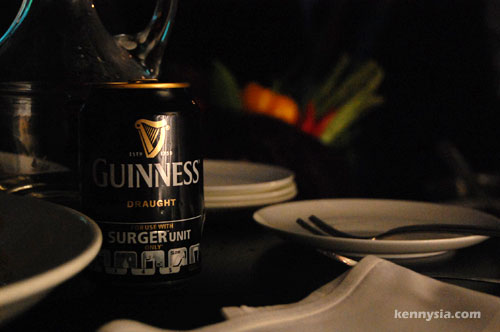 Bossa Nova at Parkroyal, Bulldog, Delaney’s, Jarrod & Rawlins, Nikko Hotel and Sevenatenine will all be serving their own Guinness-inspired creations specially for St Patrick’s Day. 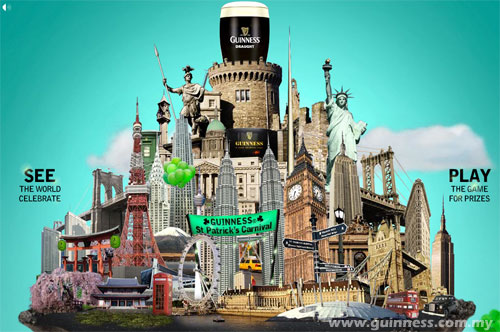 In the meantime, see if you’ve got the luck of an Irish by playing the game at guinness.com.my
There’s phat prizes to be won if you’re one of the top three scorers: a Dell Inspiron laptop, a Canon Ixus digital camera and an Apple iPod Touch. That’s some pretty flash prizes just for playing such a simple game. 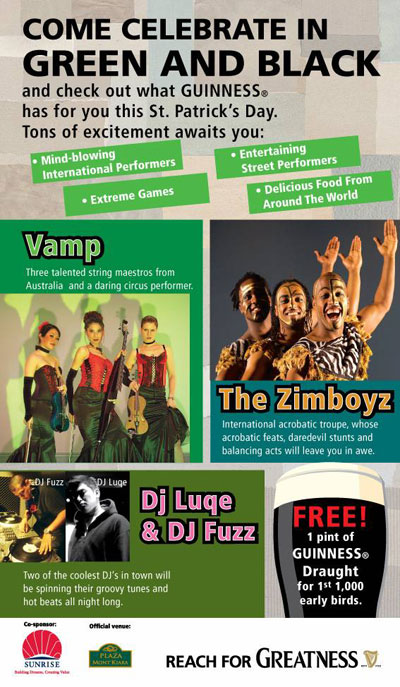 The celebration in Malaysia will culminate with the main event – the Guinness St Patrick’s Festival this Saturday, 15th March at Plaza Mont’Kiara.
There’ll be some serious entertainment going on from 5pm onwards. Not forgetting of course – loads of beer, a slice of the Irish culture, and the magic of the Chef in Black himself.
If you love to party, there’s no reason not to be at Plaza Mont’Kiara this Saturday. 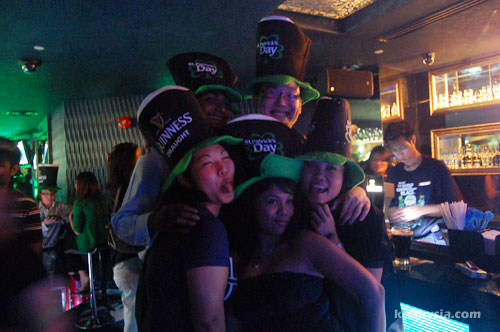 It’s the next best thing to celebrating St Patrick’s Day in Ireland itself. 😉

Blog Plug of the Day: Malaysian politics as told by LOLcats. I call it… LOLitics.

56 Replies to “ADV: Even Malaysians Can Be Irish On St Patrick’s Day”