Part of the fun writing for the world wide web is that you get readers from all corners the world. Trouble is, most people know that I’m from Kuching, but not many know where exactly Kuching is. 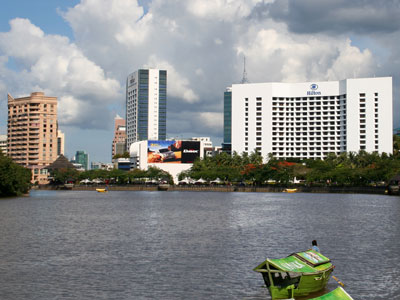 I remember there was this MSN conversation I had with a friend of mine from Singapore. For privacy reasons, I’m afraid I cannot reveal her identity. Besides, XiaXue wouldn’t like it if I make fun of her on the Internet.
XX: How’s things like north of the causeway?
KS: I’m to your east lah.
XX: When are you coming down to Singapore?
KS: Not anytime soon?
XX: Why not? We’re separated by a couple of mountains only what.
KS: We’re separated by sea lah. Where got mountains.
XX: Just drive down here over the weekland lah.
KS: Cannot lah, how to drive. Can only take the aeroplane to Singapore. Or swim. 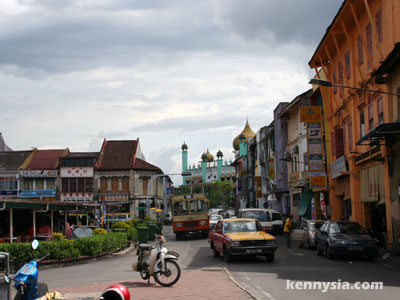 (A few days later)
XX: I just came back from Wanyi’s house and I looked up where Kuching is on the map.
XX: IT’S SO FAR AWAY LOH!
KS: That’s what I’m trying to tell you!
XX: I thought it’s just across the causeway! 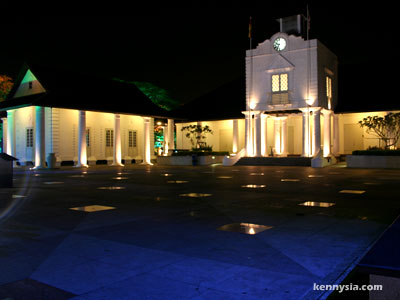 Can’t blame her for not knowing though. After all, Kuching is an obscure city that’s not very well-known outside of Malaysia. Even those from West Malaysia, particularly the older generation, can’t even differentiate between Sabah and Sarawak. I don’t know which high school they went to, but according to their geography books, Kuching is the capital of Sabah, Kota Kinabalu never existed, and the Sultan of Brunei still controls Sarawak.
Anyway, I just think it’s appropriate that I do a brief introduction to my hometown here.

Kuching is the capital city of Sarawak, a Malaysian state located on big Borneo Island. Long long time ago, Sarawak was actually a part of Brunei. Then, one fine day, some crazy angmoh called James Brooke dropped by the Sultan of Brunei’s palace and said “Oi, siao eh. Limpeh from Britain, and limpeh want to be KING!” 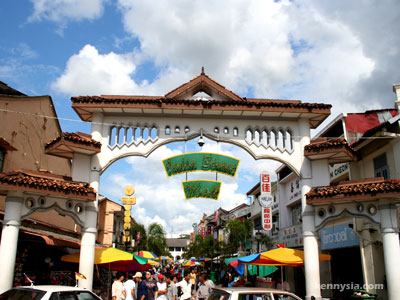 If something like this happened today, we would’ve just scratch our balls, laugh at him and said “KNN! SIAO AH! WHO YOU THINK YOU ARE?!”
But this was in the 1841, so the Sultan of Brunei scratched his balls, sniffed his fingers and said “Errr… fine loh!”
And just like that, the Brooke Family ruled Sarawak for the next 100 years. Japan said “Ohaiyo-gojayimas” and took over during World War 2. The Australians said “G’day mate!” and saved our asses in 1945. 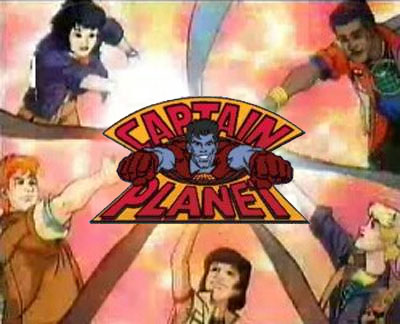 In 1963, Sarawak, together with Sabah, Singapore and Malaya joined forces like Captain Planet and formed the Federation Malaysia. 2 year later, Lee Kuan Yew said “steady-steady-pom-pi-pi”, pulled out of Malaysia and fast forward Singapore to become the wealthy nation it is today. Sarawak and Sabah stayed on as autonomous states.
Despite Kuching being a formal part of Malaysia, the differences between East and West Malaysia are still quite distinct. In fact, when it comes to the history, language, culture and demographics, sometimes I feel as if Kuching has more in common with Singapore than it has with Kuala Lumpur. For example:
Singapore was once ruled by an ang moh 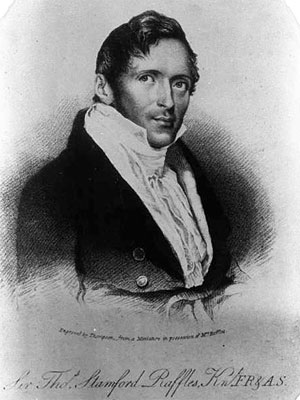 Kuching was also once ruled by an ang moh! 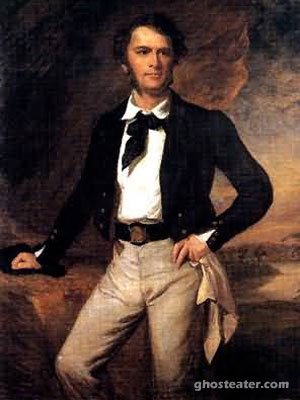 Singapore is named after an animal 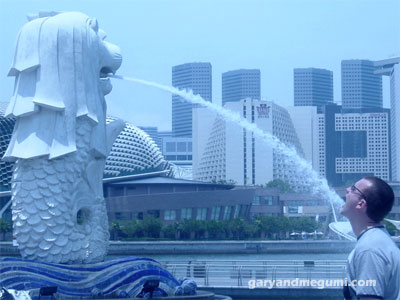 Kuching is also named after an animal! 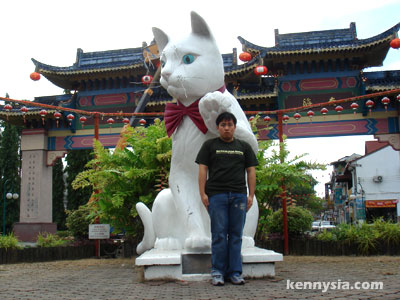 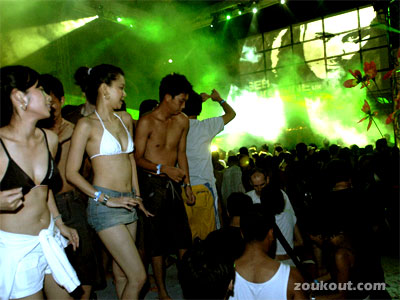 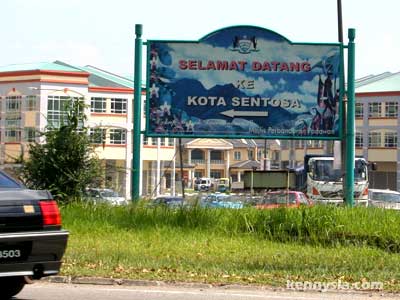 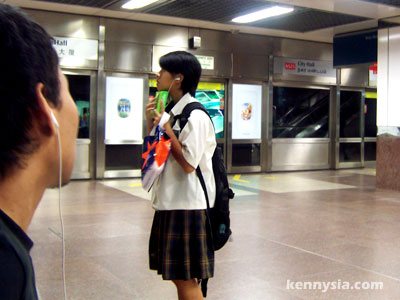 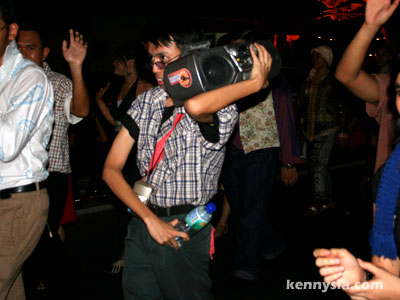 It was Lee Kuan Yew who commented sometime ago that Kuching reminded him of Singapore 50 years ago. I wouldn’t hold my breath, but if what he said is true, I’ll be rejoicing at the thought that I’d be able to party at this new club called Zouk Kuching some 50 years later.
Too bad, by then I’d probably look like this. 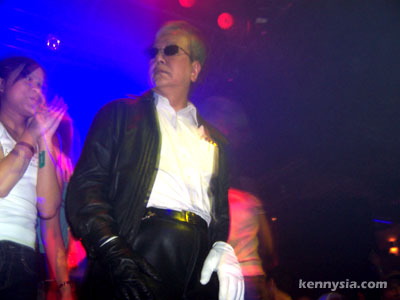 Kuching means “cat” in Malay, which is very odd because there are a lot more stray dogs in Kuching than cats. But lucky we’re not called Anjing. Nonetheless, the entire city is unhealthily obsessed with cats. Not only did we nicknamed ourselves the Cat City; the official city mascot is a cat; there’s at least two huge cat statues in the town, even a bloody huge “cat museum” dedicated to this god-like feline species. 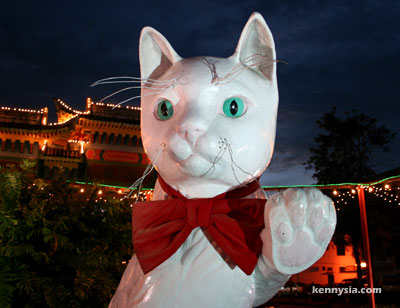 The most common misconception outsiders have about Kuching is that it’s an ulu kampung where people don’t wear clothes, hunt heads and still live on trees.
Actually they are quite right. Look, here’s a picture of me updating kennysia.com! 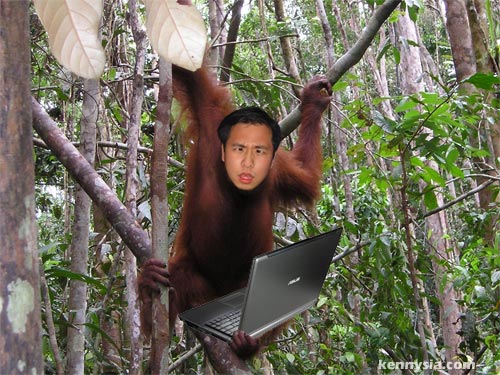 The best thing about Kuching isn’t its shopping centres nor its night life. It’s the FOOD. That’s why it’s so hard to lose weight here. Food here is so cheap and good. No offense to others hor, but I think our Laksa is the absolute best in the world. 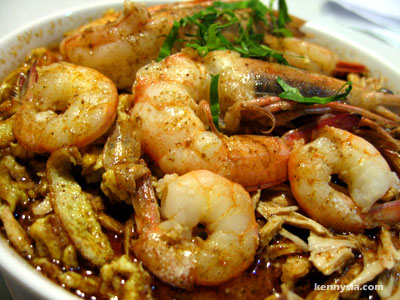 On the downside, like any other small cities, Kuching suffer from typical small-town-mentality. Tongues are loose and gossips spread fast like wildfire. Over here, a lot of people seem to take pride in showing off their children’s academic achievements and then stand on a high pedestal pointing out other people’s downfall. That’s one reason I don’t want kennysia.com to become too well-known within my hometown. Alas, that’s not working out too well. 😉 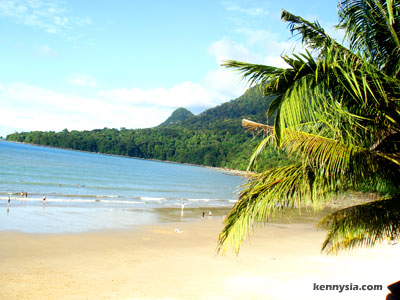 Despite that, I still love Kuching. Sure, I envy Perth’s beauty, Singapore’s nightlife and KL’s shopping. But come to think of it, there’s no other place in the world that’s so harmonious, so livable, no other place that blends city and country-living so well apart from Kuching. And I love it, just like small mouse love big rice.

Two of the most amazing things I’ve heard this week:
1. Shelley Leong singing live on the mrbrownshow. AMAZING. Download Perfect World here or listen to the entire mrbrownshow podcast here.
Best enjoyed with your headphones on, eyes closed, back laid, listening carefully to her every word.
2. My friend and renowned wedding photographer Kid Chan named by Malaysian Tatler’s as one of the Top 100 People You Must Know In Asia. What an honour! (Note to self: 1 down, 99 more to go)

226 Replies to “A Brief Introduction To Kuching”