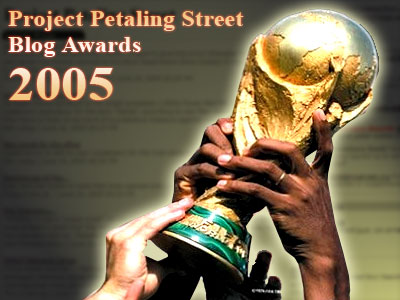 I hope the winner gets some trophy like this.
I am honoured to be in the running for the Ping of the Year award together with such worthy contendors as Jeff Ooi and Peter Tan. *pauses for applause* I am also up for the prestigious Blog of the Year award alongside well-respected Malaysian bloggers such as Mack Zulkifli and Viewtru *pauses for another round of applause*
There’s one day left till voting closes. If you’re a eligible, I urge that you cast your vote. You don’t have to vote for me, vote for the meaning behind it. In saying that, no matter who emerges as the winner, do remember than in our hearts… we are already winners.
May the best man wins. *wipes tears*
:’)
AAAAHHHHHHHH Screw this diplomatic bullshit! Cannot tahan trying to act Mr Nice Guy already. Too boring!
That’s the problem with us finalists. We are all too nice to each other. No one is writing anything passionate about this contest I’m starting to think we finalists probably forgotten all about the awards. What we need here is a little bit of pretend rivalry to spice up the awards. Which is what I’ll do.
I’m unable to contain my excitement. Its true that I respect the other bloggers in the running for this award, and its true that I probably don’t deserve to win. But I cannot hide the fact that I want to win the PPS Blog Awards. There’s free T-shirt and free 1-year webhosting for the winner. And I want them. I want to win. Who doesn’t? 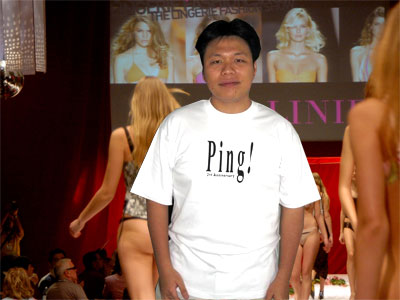 The prized T-shirt, as modelled by PPS Administrator Aizuddin Danian on the catwalks of Milan last summer.

The behind-the-scenes gossip at the PPS Blog Awards is already sensational on its own.
Initially I was leading the nominations for both NOTY and POTY, narrowly losing out the BOTY finalist spot. Jeff Ooi’s BOTY finalist spot was a certainty and looking at the number of nominations, many predicted that I would win NOTY and Jeff Ooi would win BOTY by a landslide.
Yet, when the voting booth opened many people was surprised to see that Jeff Ooi had relinquished his BOTY finalist spot. I was taken off NOTY and given Jeff Ooi’s finalist spot to run for Blog of the Year, eventhough I didn’t qualify in the first place.
This could only mean one thing. I’m not a NOTY boy. 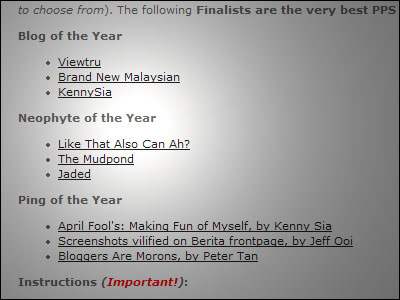 And the nominees are…
Pardon the lame pun.
To Singaporean readers who have no idea who Jeff Ooi is, allow me to introduce. Jeff Ooi is one of the most respected bloggers in Malaysia. He is our very own moral crusader, our freedom fighter, our online ombudsman, Malaysia’s Most Influential Blogger, and the AH KONG of all Malaysian blogs! As an analogy, think Singapore’s mr brown… but a lot more serious content and a lot less humour.
I look at the people I’m contending with and I look at myself. A lot of people might disagree with me, but I’m the underdog here. Let’s see who I’m up against.
Blog of the Year 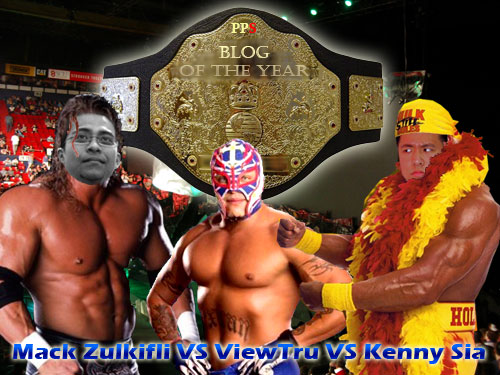 Viewtru. An anonymous blog whom some people say have the same brand of humour as mine. He’s been blogging since September 2003, which makes him the veteran blogger in this category. Compared to my blog, Viewtru’s style of writing is not as attention-grabbing. It is very casual and relaxed which probably appeals to the other bloggers who would cast their vote in his favour based on that.
Mack Zulkifli is a highly intellectual individual whose blog focus mostly on politics and current affairs. He’s often compared to Jeff Ooi, and I must say they are indeed quite similar… right down to their brush with the local police respectively. Some would say his blog is dry and reads like a PhD thesis. But unlike Viewtru or myself, Mack’s blog seek to empower not entertain. He’ll appeal to voters who want a serious and mature current-affairs-type blogger to take the Blog of the Year award because let’s face it, I find my coconuts more interesting than politics.
Ping of the Year 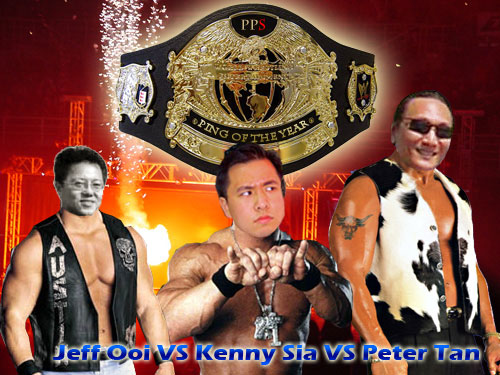 Jeff Ooi’s blog got him on front-page headlines and won him the Freedom Blog Awards. And all my April Fool’s entry got me was marriage proposals.
Peter Tan risked his life to type this entry when the Earthquake hit Penang. All I risked was my dignity.
I think its pretty obvious which one of our blog entries has more substance lah.
Damn. I wanted to blast my opponents but I ended up giving people reasons to vote for them instead. But yeah… vote for me because you enjoyed reading me or something lah (I hope!)
You need to be a Malaysian blogger previously registered with Project Petaling Street to be eligible to vote. There’s one day left, so be quick!
And if you can’t vote, I guess you can always give me encouragement by telling me how beautiful I am.

In the future, this space will be where I write some random notes and short thoughts that’ll look out of place if I were to put them together with the main entry.

57 Replies to “Why You Should Vote For kennysia.com”