It was the first time I have ever stepped off the plane into an airport so damn hot. 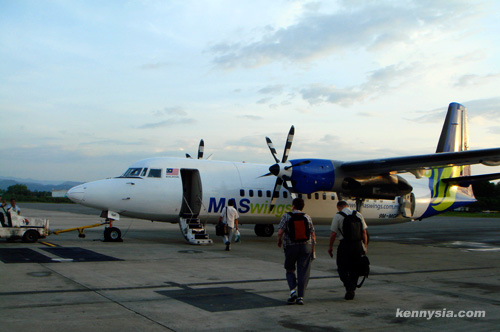 And I don’t mean hot like Megan Fox hot. I meant hot as in, there was totally no air-conditioning at all.
Having been to all kinds of airports, big and small all over the globe. I had no idea I would find one airport in Malaysia that looked as if it were still stuck in the 1970s. 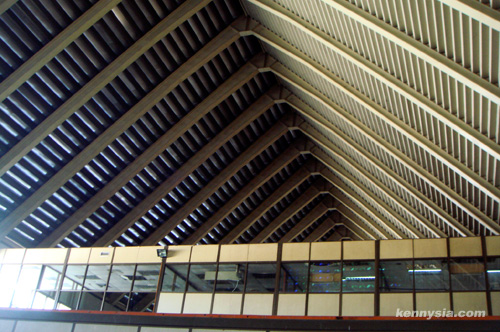 That airport is Sandakan Airport.
Sandakan is a tiny town located on the northern tip of the state of Sabah. I was here with Seet and ShaolinTiger about two months ago for an eco-trip. 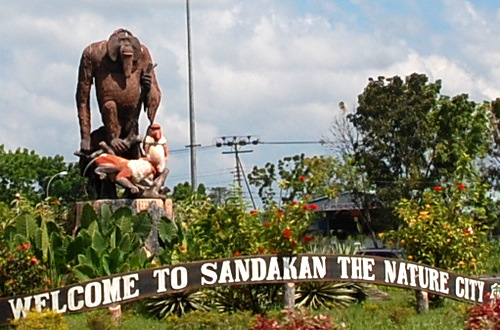 Despite having an airport, Sandakan has only just begun receiving direct flights from Kuala Lumpur as recently as two months ago via Malaysia Airlines. Previously, all flight connections had to be made through Kota Kinabalu. 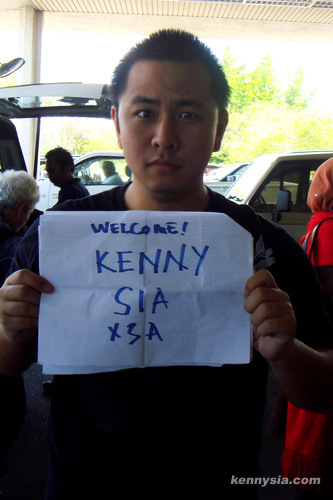 We hired Borneo Eco Tours to guide us around. In a place as under-developed as Sandakan, it is usually a lot easier to engage a local tour company instead of trying to arrange everything on my own.
Sandakan also happens to be the Sabah’s second largest city. When I heard that, naturally I thought that it wouldn’t be that much different from KK.
How wrong was I. 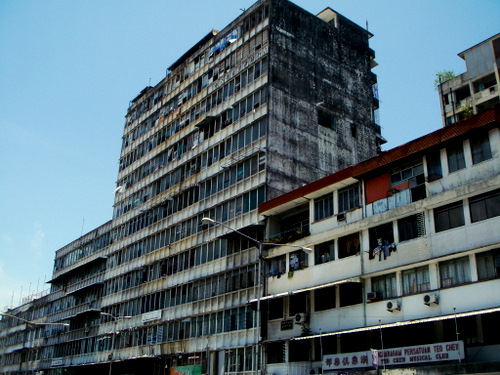 This, my friend, is the town centre of Sandakan.
Not only was the airport stuck in the 70s, the ENTIRE town of Sandakan was stuck in the 1970s.
Old and dilapidated, no buildings in Sandakan are more than 12 stories high. There is not a single five-star hotel in sight. In fact, I was told that the locals don’t even have access to a swimming pool till as recently as five years ago. 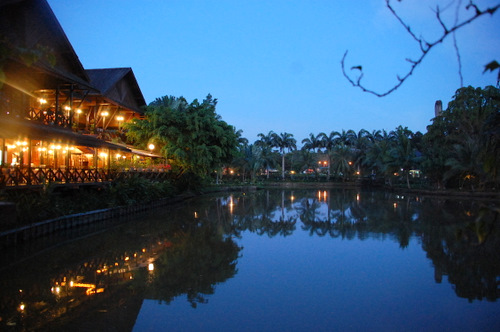 Another thing I noticed is that there is a complete absence of those big international chain stores like Starbucks or 7-Eleven. The town is almost completely free from the evil wretches of commercialism and globalisation.
But Sandakan people are smart. 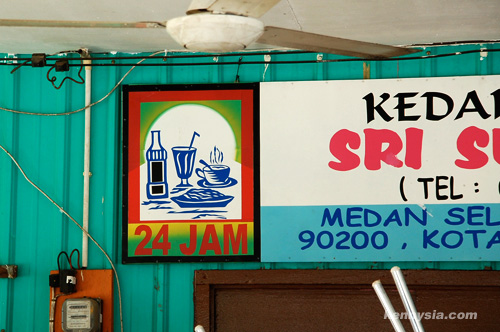 Eventhough they have no 7-Elevens, the locals have already discovered the concept of 24-hour convenience a long long looonnggggggg time ago. 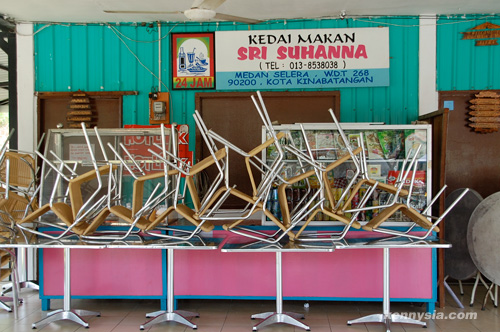 So damn long ago that their 24-hour store is now closed.
Alright, before Sandakanians reading this get offended and whack me with their VHS player, let me clarify that I am not trying to bag Sandakan for being old-fashioned. 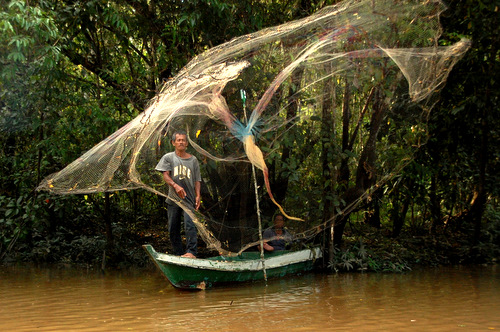 The truth is, I find Sandakan a very charming and unique place.
So unique that the first thing we saw welcoming us outside the airport was a GIANT FREAKING CROCODILE. 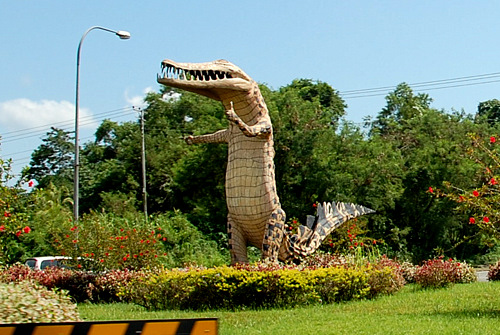 Steve Irwin would have got his hands full on this one.
As small and obscure as Sandakan is, it is not exactly completely off the tourist radar. 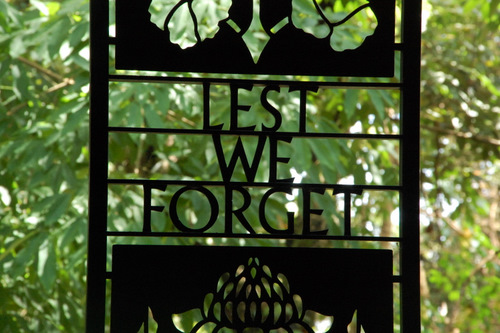 The tiny town attracts a lot of British and Australians, namely because it used to house a detention camp where many of their soldiers died when Sabah was invaded by Japan during World War II. 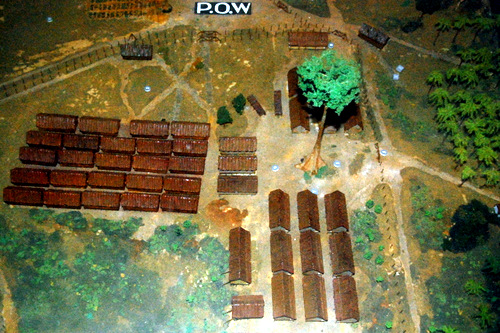 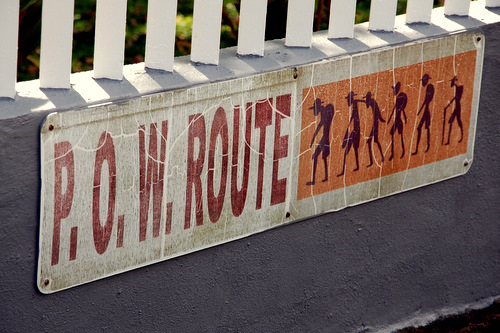 There’s one thing about Sandakan that made me like it a lot.
Sandakan is so different from anywhere else in Malaysia because wildlife and nature here are so extremely well-preserved. 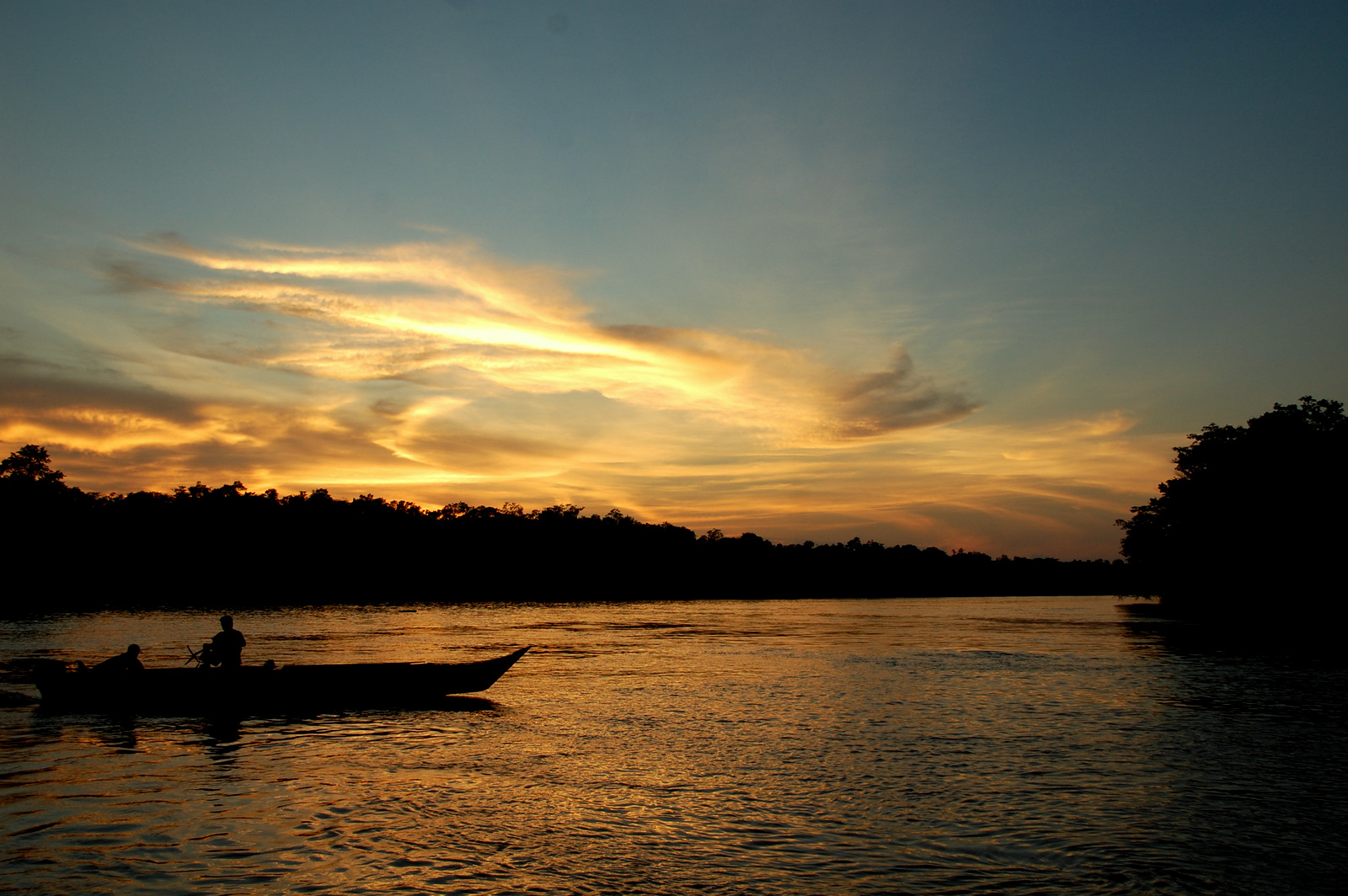 One afternoon, we were cruising down a mangrove forest in a wooden boat down the Kinabatangan River. But it was not just any boat trip. It was a safari – Malaysian style. 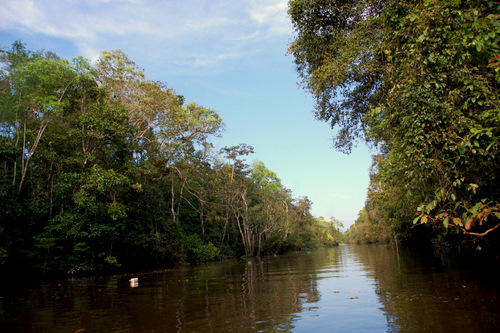 There was so much wildlife roaming around freely in their natural habitat that our guide had a field day pointing them out to us one by one. There were no chains, no cages.
It was nature like I’ve never seen nature before. 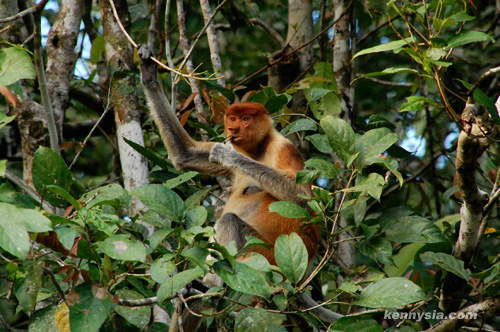 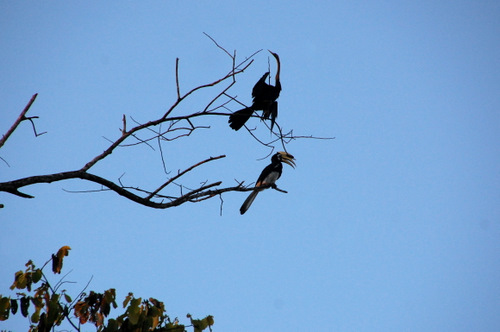 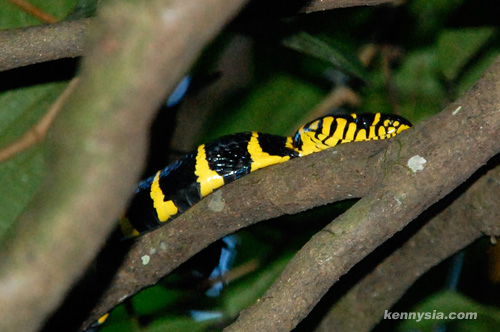 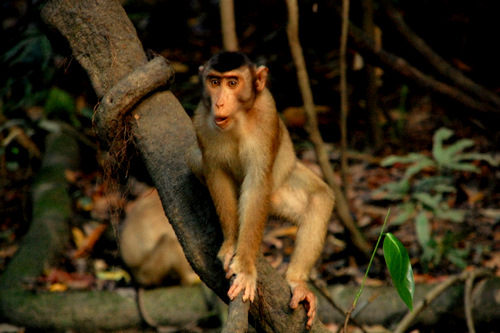 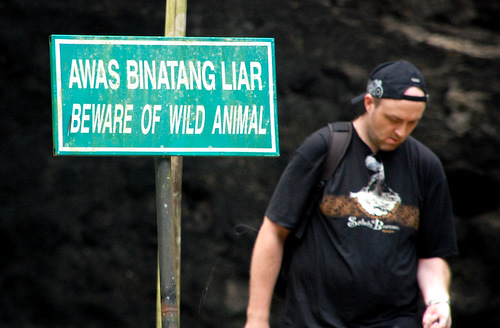 Shaolin Tigers.
(Not in Sandakan anymore. Last spotted hopping on to a MAS flight and escaped to KL)
For me, the highlight of my trip to Sandakan was the chance to finally meet my ancestors. 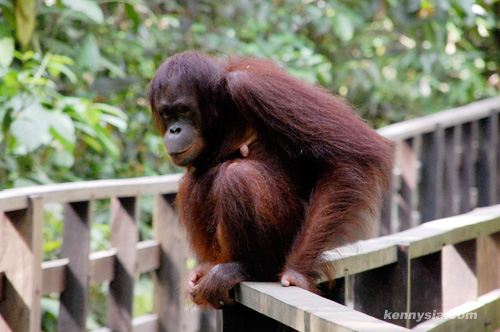 At the Sepilok Orang Utan Rehab Centre.
Although I have been growing up in Borneo most of my life, I am ashamed to admit that this is actually the first time ever I have seen an orang utan, live and in the flesh. 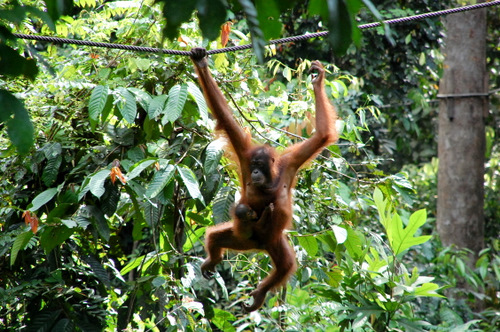 At the Sepilok Orangutan Rehab Centre, these endangered creatures are well taken care of and free to roam throughout the park. Some of them even got really close to me, giving me the chance to observe their incredibly human-like behaviour.
Sepilok made the Sandakan trip worth it. 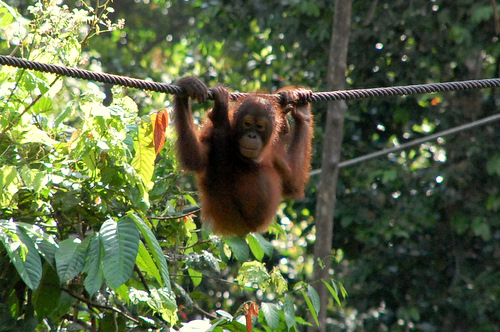 It was real nice hanging with my ancestors.
But I cannot help but to wonder. How did these orang utans ended up in the Sepilok Rehab Centre anyway? 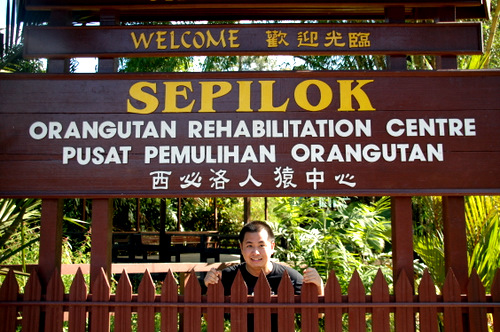 Is this where all drug-addicted orang utans were made to go to rehab, but they say no-no-no?

To the air stewardess on flight MH 2539 who secretly slipped me this card when I wasn’t looking, thank you for putting a smile on my face.
Sorry I didn’t manage to say hi.

258 Replies to “Visiting My Ancestors In Sandakan”