The earthquake off the coast of Sumatra midnight this morning is a tragedy, no doubt about it. But as they always say, every cloud has a silver lining. Disasters like earthquakes and tsunamis are often unpredictable. However, the events that followed such disasters are very very certain.
Here are the list of things to look forward to in the aftermath of the Asian Quake crisis. 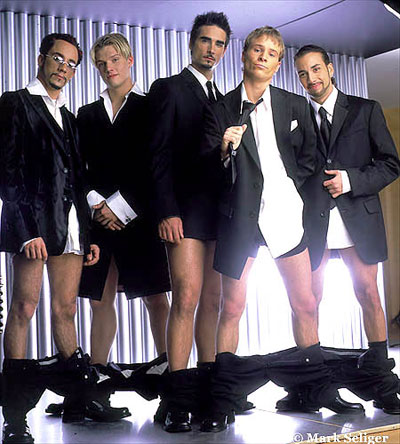 Guys, I really really really wish I could say that I photoshopped this picture. I’m sorry to say that this photo 100% real – its official, THEY’RE GAYS!

The Backstreet Boys will be coming back to Malaysia to hold another ‘Force of Nature’ charity concert. Maybe this time we can all sing “Backstreets back, ALRIGHT!”
Halfway through Nick Carter will be probably speak in a touchy-feely voice saying “The biggest force of nature is the human spirit. *sniff*” Then AJ will be like “Will somebody PLEEASSEEE think of the children?” Then the five of them would be all crying and hugging and kissing and groping each other on stage, asking everyone to donate money for relief efforts, whilst they go backstage to provide some hand relief efforts for themselves.
As usual all the Datuks and Datins will have the best seats of the evening.

4. Disaster = People Blaming People for Everything!

Let the finger-pointing begin!
Hyper-religious idiots will be screaming “This is God’s revenge to all these Muslims!” Or in Audrey’s case, people saying to her “[You] should convert to Christianity now so if anything happens, [you] can go to Heaven.” Poor nations will be complaining that rich nations are stingy with their efforts. Rich nations will be contemplating whether to donate or spend another $30 billion bombing iRaq. Meanwhile, concerned/brain-dead citizens will blaming their government “OI!!! How come you din tell us earlier that there’s going to be an earthquake ar? ITS ALL YOUR FAULT!!!”

Remember how last year’s New Year’s Eve celebrations were toned down or cancelled in the wake up the tsunami disaster? Sorry to all the jokers out there, but April Fool’s this year is postponed. 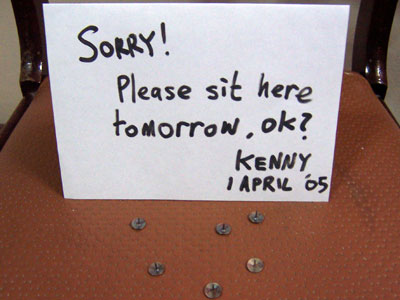 What? You think we all still have the mood to play jokes on people ah? Shame on you! Why don’t you spend your time helping out with the relief efforts instead? 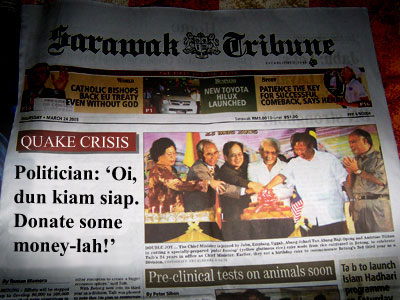 Forget about reading the local Malaysian newspaper. I can describe the front page headlines for the next 7 days. Visualize this: Overblown pictures of political big-wigs hitting some gong or cutting some cake on some so-very-important ceremony. The big bold headlines would scream something like “Politician says ‘DONATE MONEY FOR QUAKE RELIEF EFFORTS!'” 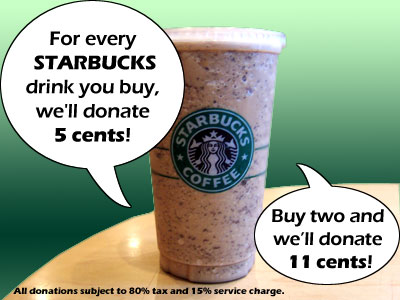 Businesses will be taking advantage of this disaster to lunch, sorry… launch their late$t $ale$ promotion. They’ll entice you to buy their latest product whilst claiming that a portion of their money will go towards some big-ass charity. If you don’t buy their products then you must be a heartless person. Shame on you. People dying everywhere and you aren’t even helping those big companies to donate towards relief efforts!

Ahhhh…. I reckon its going to be oh-so-routine.
Of course, I’m not slamming them. After all, all these go towards a good cause.
But you know what? We don’t need big-ass charity concerts, big-nut politicians and big businesses telling us to donate money. We are not animals. We are humans, we have feelings and our need to help others should just come naturally from our hearts.
Guys, you don’t need me to tell you to donate money. Just give what you can give.

Meanwhile, here’s a picture of me doing my own relief effort. 😉 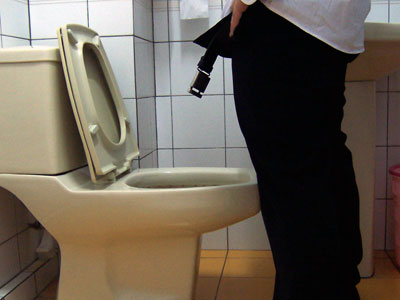