Man, that sounded good. Repeat after me, “My bandwidth has EXPLODED.”
It sounded as if I couldn’t control my site’s popularity, and that kennysia.com has become the world’s most visited website next to Google.com, receiving more hits daily than an altar boy’s ass.
I wish I could tell you that my web host can no longer handle the enormity of my testicles, and that they have to purchase extra hardware just to support the weight of my ever expanding balls.
But sadly that’s not true.
(I still have big balls though. :))
The truth is that I’m an idiot.
See, when I started kennysia.com January this year, I looked for the cheapest web host available and purchased it without doing much research. Its only after a while that I discovered that there are better web hosts out there that cost half as much.
Yet at that time, my 25MB storage and 1GB bandwidth for USD$4 a month sounded more than enough for me. After all, the website I did for the company I used to work for (spectraeng.com.au) only used up about 200MB of bandwidth per month.
Part of the reason I started this site is to keep in touch with my mates in Perth. Instead, the people I expected to come, bar a few, didn’t come. (Gee, thanks guys. Such great friends you are!) Instead, I get visitors all the way from Canada to Taiwan, UK to Korea.
Granted, most of these people are just interested with my Reviews. But these people are such suckers. Bandwidth suckers, that is. 🙂

Coincidentally, the more popular entries are the ones that eat a lot of bandwidth. In February, I had to apply for a 2GB bandwidth allowance, thanks to my stupid Jenna Jameson Ringtone. Then just last week I had to upgrade it AGAIN to 3GB.

From the search keyphrase above, you can tell that the most popular entry on kennysia.com is that stupid vibe4u Vibrating Condom Review. All I can say is “What the foot?”. Man, I thought that kennysia.com can be famous for other reasons. Instead I’m known as the #1 search result on Google for ‘vibe4u’. My parents should be so proud.
Well, I’m happy that Koreans and Taiwanese are reading my vibrating condom review. A large number of them even translated that review into their own language with Google’s translator tool. But you know, those things are never reliable. I’m somewhat concerned that some of my words might be lost in translation. Take this sentence for example…

“I can’t believe I paid AUD$12.95 (RM35) for this thing! This is just one condom and some buzzing cock ring we’re talking about!”

In Chinese, that sentence became…

For those of you who CAN’T read Chinese. Well, that sentence was…

“I can’t believes I AUD$12.95 which pays (RM35) is this matter! This is cockerel ring which one condom and some humming sound calls we’re discusses!”

“Wow…I didn’t know that you live in Malysia.
I was impressed by your review of Vibe condom
and I introduced this site to my friends.
Hope you make more review about interesting stuff
such like condoms. :)”

Gee, thanks Jerry. Ask someone with a non-existent sex life to do more reviews on condoms. Just rub it in, Jerry, RUB IT IN. What do you want me to review next? PREGNANCY STRIPS?
Pleae parden Jerry’s commang of Engllissh, he are Korean so his grandma is nod vely goot.
Seriously though, thank you Jerry, sincerely. I’m glad that you enjoyed reading my reviews as much as I enjoyed writing them. Its too bad I can’t find any new wacky things here in Kuching that make me go “Whoa! That’s unsual!” However, if anyone overseas do find something unusual that you think I might like, feel free to pop me an e-mail. As long as it costs less than RM100 after shipping, I’d consider buying it! 🙂 Thanks in advance.
Oh, if you’re reading this far, sorry I wasted your time. Haha! You’re probably expecting the usual laughs and tickles. I should’ve warned you this is going to be a boring site-related entry from the start. I promise a proper update tomorrow.
Speaking of that, I think as kennysia.com’s readership grow, other people’s expectations of my blog grows as well. Kim (long-time friend, short-time blogging buddy, all-time pest) once said to me that she felt that I’ve changed, that nowadays I seem to be more concerned about making people laugh. She has a point. Ever since the unexpected popularity of my entry on Annoying Friendster Trends, I’ve been feeding off people’s comments and trying to insert humour in each of my entry. So much so that people expect my entries to make them laugh.
In some ways, I don’t mind that. I like to make people laugh. Yet, sometimes I’m just not in the mood. Sometimes I’m just upset at the way things are going in my life. How weak my father is. How much I hate people forcing (yes, FORCING) their religion onto us. People who promise us miracles, like 932 other religions out there. People who waltz in, promote their God like an Amway salesman and go on and on and on and on about how good their religion is without so much as asking a simple “How’s your dad doing?” throughout the whole conversation, and then they get all furious and shit when we said that we are just not interested. God dammit, get the hint! WE-ARE-NOT-INTERESTED in your religion! 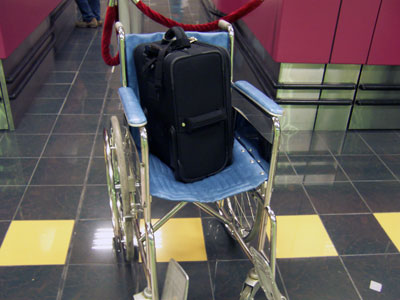 Oh what have you done? My dad has gone hiding in his luggage bag thanks to all these religious promoters!

Anyway my point is, please don’t treat kennysia.com like jokes.com. Please don’t expect jokes everyday because this is, after all, my personal online diary. Just like everyone else, I go through a wide range of emotions every different day. I may joke, I may not – one thing for sure, everytime you read this space, you’re getting the real and truthful me. And I’ll appreciate that.
Riggghhhttttt, proper updates tomorrow!
Update : Since posting this entry up, there are reports of another major earthquake near Sumatra. No, I swear this one isn’t caused by my testicles.
Seriously though, I hope that a repeat of last year’s tragedy does not occur and that casualties be kept as close to zero as possible. Please pray.
Another charity concert, anyone?

15 Replies to “kennysia.com’s Bandwidth Has Exploded”