I hope I didn’t shock anyone with this entry’s title. 🙂 I just got back from Sibu, and man… what a trip that was! My flight from Kuching to Sibu was definitely one of the most terrifying flights I have ever been on. 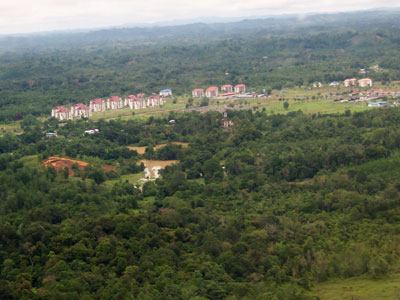 Sibu from air. The town of Sibu reminded me of Kuching ten years ago, when there were more trees than buildings.

Sibu is located about 30 minutes north of Kuching by flight. My flight departed Kuching airport 5:30pm on Sunday. By 5:50pm, the captain PA-ed through advising us that the flight is due to be landed shortly. Everything was SOP (standard operating procedure) up till this point. 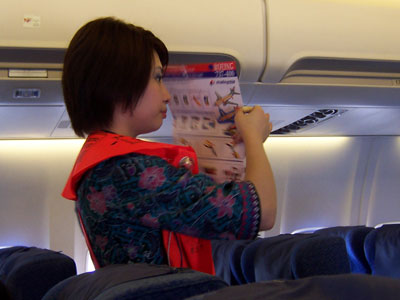 In-flight safety demos: the only thing preventing me from becoming an air steward.

As the Boeing 737 began descending onto Sibu airport, we experienced a mild turbulence which progressively grew in magnitude. Before long, the entire aircraft was shaking and dropping uncontrollably. Few passengers were already making use of the air sickness bags for reasons other than stealing Malaysia Airline’s cups and cutleries.
Looking outside the window, I could see, amid thick clouds, that we were close to landing. I held onto the passenger seat in front of me, expecting a bumpy touchdown while cursing myself for ignoring the pre-flight safety demonstrations. Then suddenly, instead of landing, the aircraft picked itself up and climbed back onto air. Sensing confusion, the captain advised us that we were unable to land due to bad weather. We circled the air, waiting for the weather in Sibu to clear up. 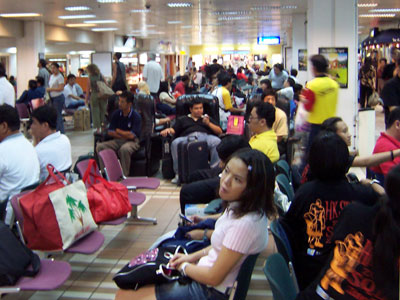 Scene of chaos at the departure hall, Kuching

After 2 hours of circling Sibu’s airspace, we were running out of fuel. The aircraft flew back to Kuching to re-fuel and dumped the passengers in the departure hall. It was 8:00pm and we hadn’t yet had our dinner. Starving, I sauntered to the only cafe opening at the Kuching airport’s departure hall only to find out that a RM2.50 kueh tiaw costs RM8.40. I politely declined, instead purchasing RM8.40 worth of biscuits and chocolates which I shared with my five other workmates. 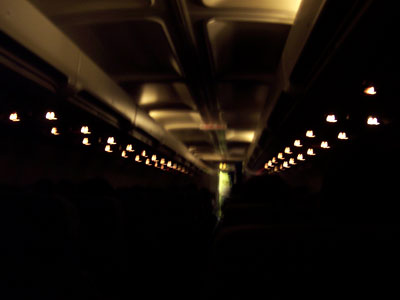 By 9:00pm, we were back up in the air en-route to Sibu once again. That was another equally horrendous bumpy ride that only the West Malaysians who have experienced the earthquake could understand. The astonishing thing here was that there were passengers stupid enough to get up and go to the toilet in the middle of a major turbulence. Its amazing to see an ah-mah trying to balance herself holding onto the seats on a bumpy air-ride, whilst asking people where the toilet is. Until that dat, I have never seen an air stewardess shouting at passengers to get back to their seat. 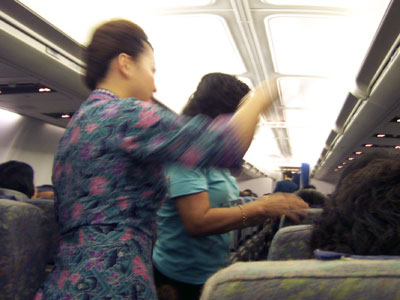 We touched down at 9:45pm with a hard and solid thud, followed by cheers and applause and mobile phones ringing because I forgot to turn mine off before boarding (oops!). My workmates and I exited the departure gate only to realise that our driver had conveniently left us to go home and sleep. 🙂 Anyway, we flagged a taxi and checked into Li Hua Hotel. 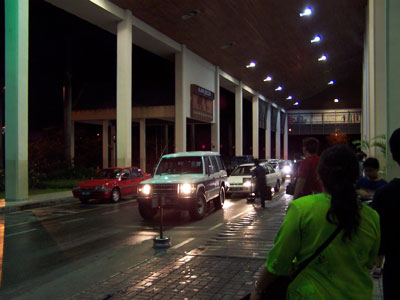 I only got to see the effect of heavy rain the day after. 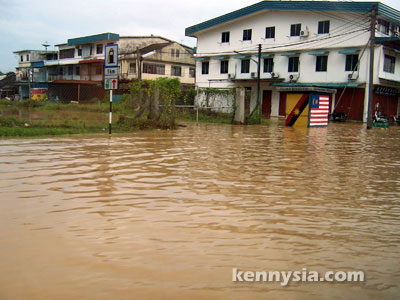 Water in the drain spilled over onto the roads. Roads became rivers and cars looked more like boats. There were no shortage of stalled cars by the roadside and residents looked on as if its just another day in Sibu. There was so much water everywhere, I’m beginning to suspect the people of Sibu might actually be amphibious to be able to live in a condition like this. 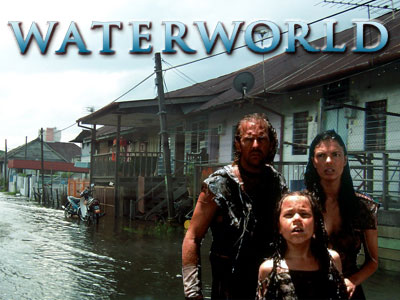 I noticed that the drains in Sibu are all extra-ordinarily wide. In fact, they looked more like the water canals of Venice. 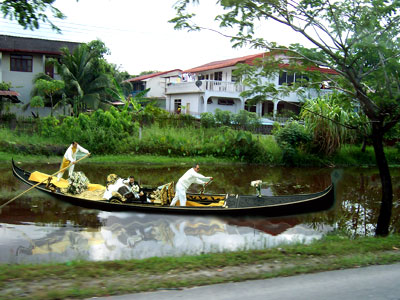 Even then, the drainage system was still no match for such force of nature.
I was put off by the brown-yellowish colour of the drain water. I doubt the sewerage system of Sibu is functioning, so God knows what’s beneath the water. A mixture of mud, shit, soil, shit, urine, shit, etc most probably. Ugh. I tried not to think too much about it. So I visualised the brownish water as Teh Ais instead. 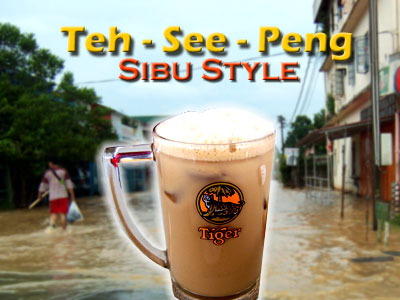 34 Replies to “The Great Sibu Flood”