My mom walked into my room one day and threw a copy of the newspaper onto my table. 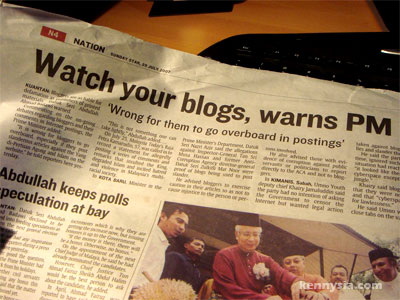 “KENNY! Explain to me what this is all about. Why are all these bloggers getting arrested?! Even the Prime Minister also come out and give warning to bloggers! You better be careful what you write on your blog ah!”
Bloggers have been appearing in the newspaper left right and centre lately. Not necessarily for good reasons. 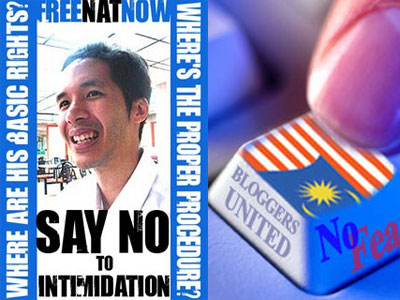 Earlier this year, Jeff Ooi and Rocky were both served a lawsuit, allegedly for defaming the New Starts Times and its editors. (they did not)
Two months ago, Nathaniel Tan was remanded by the police for questioning over a comment on his blog which supposedly had violated the Official Secrets Act. (it did not)
And just a few weeks ago, even relatives of the royal family Raja Petra Kamarudin and his wife were taken in by the police for questioning after a complaint filed by a certain ruling political party, alleging that contents he wrote on his blog were insulting religion and the Agung of Malaysia (they were not). 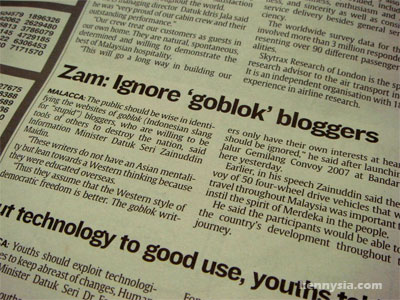 In the days that followed, countless warnings and name-callings were issued by government officials against Malaysian bloggers.
I would be lying if I said I wasn’t a little perturbed.
Reading their statements on newspapers was like witnessing a modern day witch hunt. As if the officials were out to condemn bloggers as scums of the Earth on par with mass murderers and child rapists. They were not holding anything back. 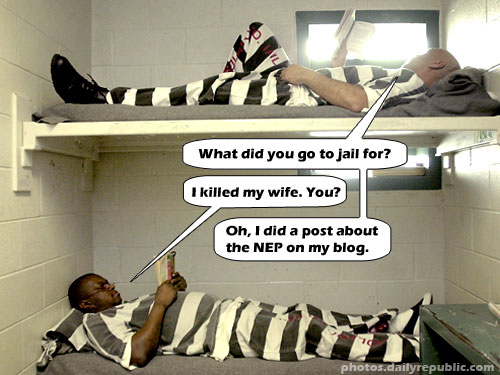 What’s the big idea?
The most obvious thing these four bloggers all have in common is that they are all considered socio-political bloggers. Unlike Kenny Sia, these guys don’t write about how the logo of some bank resemble a penis, or how some metallic bird in Kuching was equipped flashing neon lights.
These guys write the serious stuff.
Which is why as much as there are different theories thrown around about the sudden wave of condemnation against bloggers, the most logical assumption is this simple fact – ELECTIONS ARE COMING. 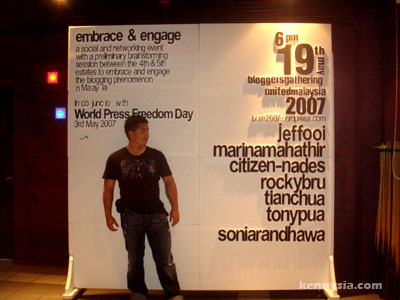 Let’s face it. By far, a huge majority of socio-political bloggers on the Internet are outspoken and passionate activists. History has also shown that the more well-informed, internet-connected urban voters tend to sway towards the Opposition’s side.
Case in point, the Singapore Elections and the Sarawak Elections in the 2006. In both cases, the ruling political party suffered major loss on an almost unprecedented scale. In both cases, socio-political bloggers were seen as the driving force behind the political climate change.
The ruling party in Malaysia has every reason to be afraid of bloggers in this day and age of new media. For all the actions and intimidation taken against these bloggers, I must say I am not surprised. 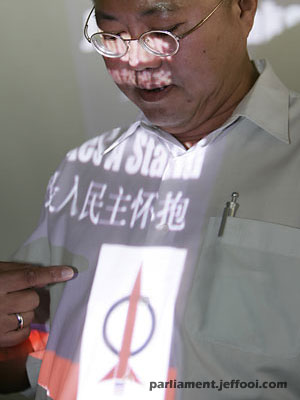 Perhaps the officials have another reason to be even MORE afraid when Jeff Ooi announced recently that he is crossing over into politics. He will be contesting in the next General Elections as part of the Opposition.
This is big news. In fact, this is HUGE news.
This is the first time in Malaysian history that a popular blogger will be competing in an election. This is the first time a socio-political blogger might actually end up becoming a member of the Malaysian parliament.
Instead of going to jeffooi.com, we might have to go to yangberhormatjeffooi.com 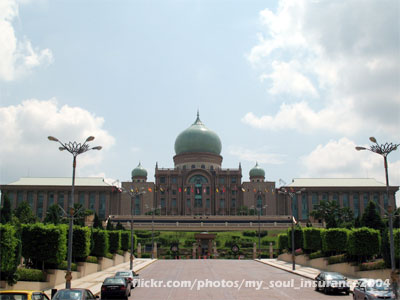 Heck, a blogger might even become Prime Minister of Malaysia.
Sure it’s a long shot. But why not, right?
Malaysia is not run by communists. Malaysia is a democratic country and in truly democratic nations, any citizen could theoretically be elected as the head of government. So what if Jeff is Chinese? Race shouldn’t be a limiting factor in democratic nations. 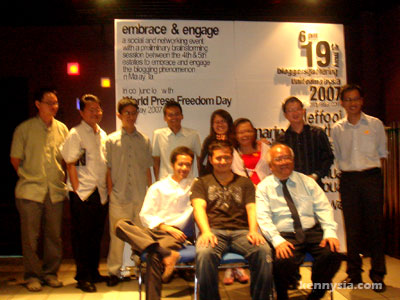 Although it is likely that the Malaysian blogging community will be happy to cast a vote for one of our own, the problem with Jeff is that his blog appeals mostly to blog readers of the older age group, which is unfortunately very small.
Blog readers are predominantly younger. Only a small number of young blog readers of voting age know of Jeff, let alone vote for him in the upcoming elections.
Adding to that is the cold hard truth that most young voters are more interested in the latest hit single by Avril Lavigne than who to vote for in the upcoming elections. A lot of work needs to be done if Jeff wanna attract younger votes. 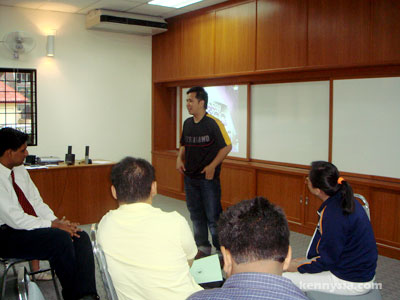 Now, this is just a suggestion. But if Jeff wants to run a campaign to woo younger voters in the upcoming elections, I think I might have a solution for it.
Behold, my ‘suggested’ campaign video for Jeff Ooi’s upcoming parliamentary election.

Sure, it’s a little rough around the edges. Hey, I’m not Namewee. What matters is that it comes from the heart.
If this doesn’t make Jeff Ooi the next Prime Minister of Malaysia, I don’t know what will.

271 Replies to “Reason Behind The Recent Condemnation Against Bloggers”