(continued from last entry. I took a lot of time editting this entry before I publish it because I have to particularly careful with what I say and how I say it. The end result is not exactly what I wanted but I’ve copped enough shit already and I don’t need more.) 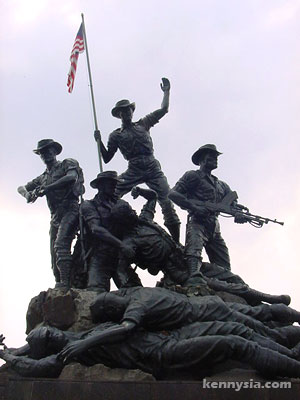 This post today is not about me joining in on some childish mudslinging match between Singapore and Malaysia. I was just inspired to write this entry after observing how my fellow Malaysians react when negative aspects about our own country are being highlighted.
I’m grateful that Malaysia is a peaceful nation and, when compared to the many war and famine strickened countries around the world, we should really feel happy with what we got. There’s been all these talk about racism in Malaysia, but I’m appreciative of the fact that I keep my Chinese last name, practise our own religion and celebrate Chinese New Year. In addition, I think Badawi is doing a fantastic job so far (not being sarcastic here) though I’m afraid I cannot say the same things for our other leaders in the parliament.
That said, Malaysia is not perfect. I acknowledge the fact that Malaysia is a developing nation, and that it still has a long way to go before it realises Vision 2020 (if ever) and becomes on par with the first world countries.
There are a lot of things not right about our country. ‘Efficient’ government departments, ‘zero’ corruption, ‘excellent’ public transport system, ‘fair’ tertiary education scholarship criteria, ‘not enough’ race-based political parties and so on, being the few of them. And the feeling I got is that majority of Malaysians, the younger ones in particular, either don’t care about it, don’t know about it, or worse, don’t want to hear people talking about it. 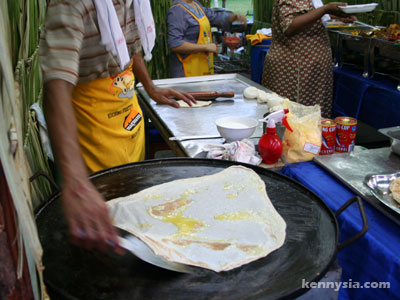 When F (note I said F, not X. They’re two totally different people) wrote a list of Malaysia’s flaws on her blog in an entry titled ‘Negaraku’, I’m surprised she got flakked for it eventhough a lot of what she said is true.
Maybe its to do with the fact that she’s a Malaysian living abroad. Maybe its the way she used another country as an example of “how things are done right”. But among other things, she was called ignorant, superficial, even a traitor for dissing her own country. Someone made an interesting comment on her blog saying Malaysia’s biggest flaw is not teaching its citizens to accept it for its flaws.
Wait a minute, Why should we accept the flaws of this country? Are we saying that we should accept handbag-snatchers, dirty streets and crazy-ass traffic officers seeking a contribution to their retirement fund as the norm? Of course not.
I’m just disappointed that there are people I know who’s saying we should all just shut the fook up and quietly eat all the crap being thrown at us JUST because that’s what we grew up with and that’s the way things work around here. I mean, if I were to follow THAT advice during my fiasco with the Malaysian Customs, I’m probably never ever gonna get my money back.
No, I will not let you screw me in the ass just because that’s the way things work around here. If you’re being unfairly treated because of some stupid policy, stand up and speak up for yourself. Challenge the authority.
What everyone ought to remember is that love for the country is very different from love for the government. A lot of shits we had to put up with are the direct result of both the government’s lack of planning/lack of foresight/lack of common sense and some uncivilised citizens. Keeping our cities clean is everyone’s responsibilities, but how many people actually follow that principle? 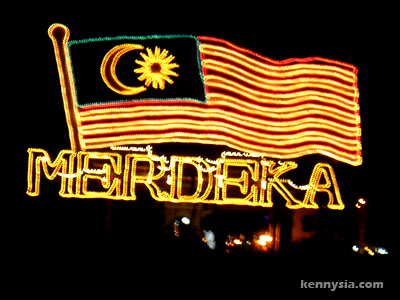 We should ALWAYS love our country because patriotism is a virtue. We should ALWAYS be proud of the Malaysian flag because it is our identity. But we should NEVER EVER accept snatch thefts as the norm. We should NEVER condone corruption as part of the Malaysian culture. And above all else, we should NEVER stop challenging the government to work for its people. Each of us citizens have a part to play to make Malaysia a better place. One of the ways we can help is by talking, or as some people put it, ‘complaining’ about the issues.
There’s nothing wrong when other countries are being used for comparison. I’m not saying those who’ve been overseas are holier art thou. Hey, we all learn from other people’s successes and failures – that’s why we study history, that’s how we grow. Don’t be too fast to shoot down someone, especially a fellow Malaysian, and accuse them of dissing our own country just because another country’s name was mentioned. More often than not, it’s after staying overseas and observing the ways things are being done elsewhere that we realise how things could be better done with our own country.
Of course, one has to be reasonable when it comes to this.
I’m not gonna compare Malaysia’s hot, humid and rainy climate to Australia’s clean fresh air across four seasons because we are not Gods and we cannot change the weather. I’m not gonna bitch about how, in an effort to boost birthrate, the Australian government gives AUD3,000 (that’s RM8,500) to the parents for each baby born (it’s true), whereas the Malaysian government gives you nothing more than a pat on the back and a “Well done!” because I know its silly to compare Malaysia’s cash reserves to that of a first world nation. 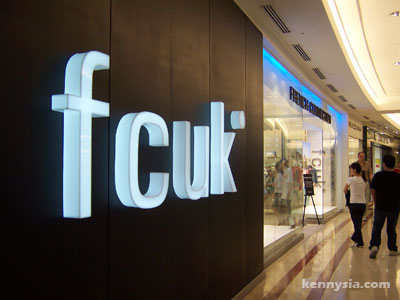 However, I’m gonna bitch about how in Malaysia ‘courtesy’ was an alien word to people working at the cashier counters before Starbucks came along and taught us how to smile and say ‘Hi’ to our customers, and not just stare and follow them everywhere when a customer walked into their shop like how some shopkeepers do because they’re afraid you’re gonna steal their stuff. I’m going to bitch about how in some countries, people study overseas because their results are too poor to get a scholarship into local universities; whereas in Malaysia, people study overseas because their results are too good to get a scholarship into local universities.
There’s a limit though. I’m all for weeding out the negative aspects of our country but not at the expense of losing our Malaysian culture and identity. I mean, if the VCD seller at Petaling Street starts speaking to me in perfect English I’m probably gonna slap him. 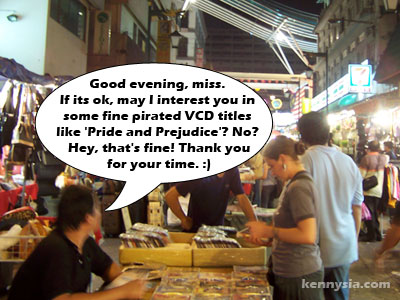 I’m an optimist and I think, with the exception of a sad few, that most Malaysians love their country, including F. Home is where the heart is and so far I haven’t yet met any Malaysians who is so ashamed of our own country they had to introduce themselves as Mongolians.
I think Malaysians in general just don’t like to hear criticisms about their own country. Everytime we hear someone mentioning something remotely negative about our country we automatically go into defensive mode and attack the person making those comments. Frankly, I think that kind of attitude is sad. If that’s our idea of patriotism, then I think we’re pretty much screwed.
So all I’m saying is this, people: Be proud of Malaysia and love your country. Just don’t love it blindly.

My workload is getting slightly more managable now. We’re still behind schedule but not that much. At least I can now go home from work by 10:30pm instead of 3:00am. Still, I had to miss one month’s worth of gym just to see these projects come to fruitition. 🙁