A couple of people have requested that I write something the latest car audio that I purchased. 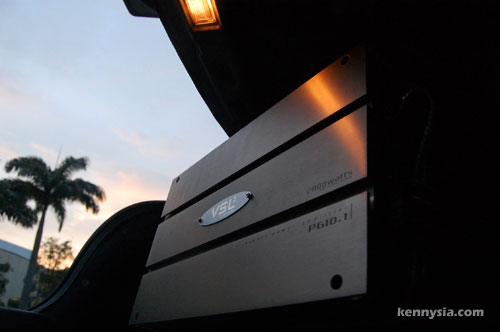 I was actually kinda reluctant to blog about my car audio. The reason for that is that I know when compared to others, mine is really nothing to brag about.
I don’t understand why people are so interested in my car audio really.
Somehow, guys always like to get together and compare the size of their equipment. Somemore they always like to ask each other about how big their woofer is. 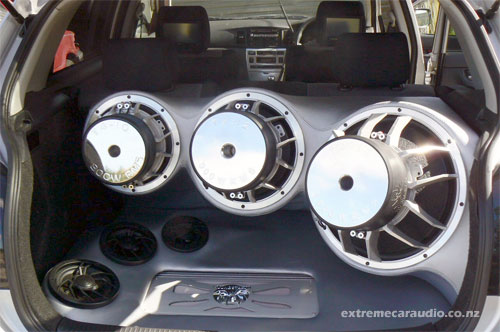 So people keep on comparing and upgrading.
Hust when you thought you’re walking around with the biggest woofer in town, someone else comes along with a woofer twice your size. 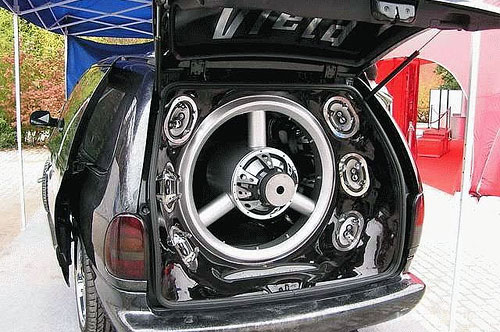 That’s one reason why I didn’t really wanna blog about it. Another reason is, I don’t really like cars.
I know.
Shock. Surprise. Guys by nature SHOULD love cars. Heck, there are even guys out there who love their cars more than they love their women.
I don’t know if anyone noticed, but usually the more a man loves his car, the bigger his car’s back hole is. 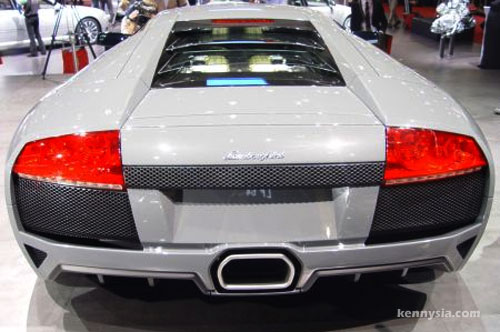 That’s definitely a source of concern.
I don’t like cars and I don’t know know a lot about cars. In fact, I’m really quite noob when it comes to cars and car audio systems. If I blog about how much I spent on my car audio, someone like Paul Tan is probably gonna come along and say “OMGWTFBBQ! YOU GOT PWNED. N00B! LOL!” 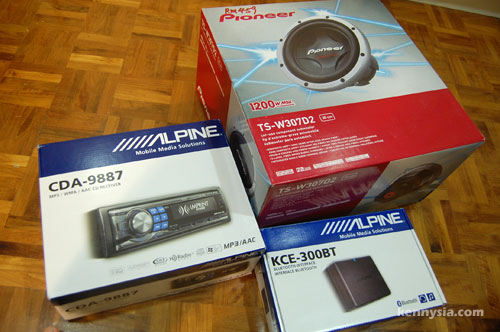 At the same time, I’m very happy about my purchase.
Guys blowing a big sum of hard-earned cash on boys toys is the same as girls spending money buying new underwear for themselves. Whenever we get a new toy, we get a rush of happiness and self-satisfaction going through us that closely approximates orgasm.
Not only that, part of us feel like sharing the orgasm with everyone else.
So here is my orgasm. 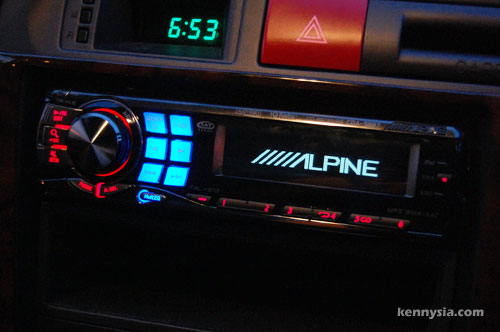 My brand new Alpine CDA 9887 head unit.
I’ve never used Alpine before this because they are usually ridiculously expensive. But I do know they’re good because they supply to the likes of Mercedes-Benz and Aston Martin.
The Pioneer unit I used before this was good too, but compared to this one it’s crap. 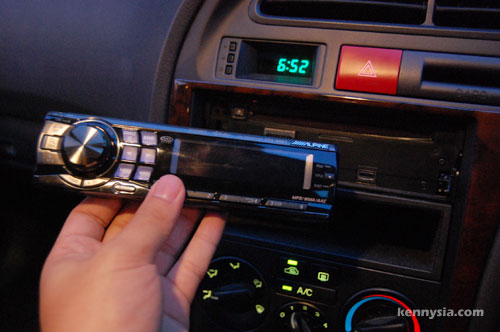 Having a detachable faceplate is one security feature I demand for any head unit that I buy.
I learnt it the hard way after having my car window smashed, dashboard ripped open and head unit stolen. 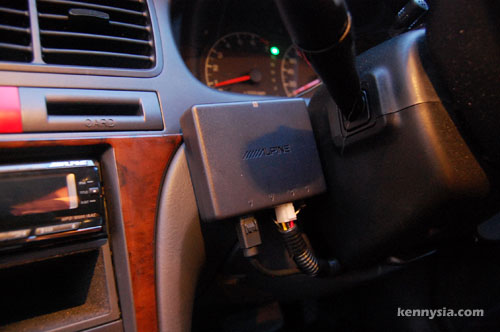 The Alpine unit I bought comes packaged with an external bluetooth device. The bluetooth factor was what attracted me the most because I listen to a lot of music and podcasts from my mobile phone.
The bluetooth thingy also doubles up as a handsfree kit so I can answer my phonecalls while I’m driving. There’s a cute little microphone that I mounted behind my steering wheel. 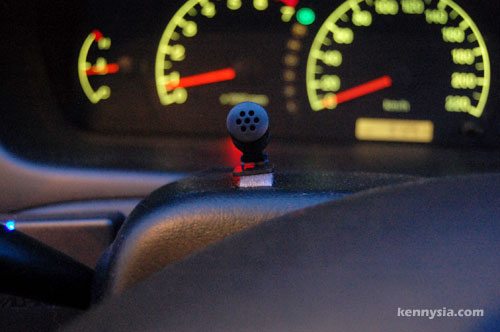 All up I paid around US$525 (or RM1,680) for those two online. When I picked up my package from the post office, I was also asked to donate RM90 to Malaysian Customs.
Paying RM1,770 for a head unit is probably a little excessive, but yeah I’m crazy like that. 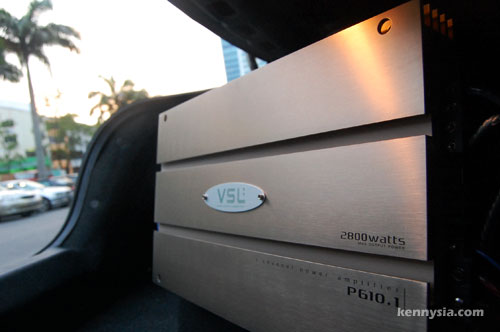 This is the VSL monoblock amp which I bought locally for RM900.
An idiot like me have no idea anything about amps. All I know is that the bigger it is, the better. And this is the biggest amp they had that falls within my budget. 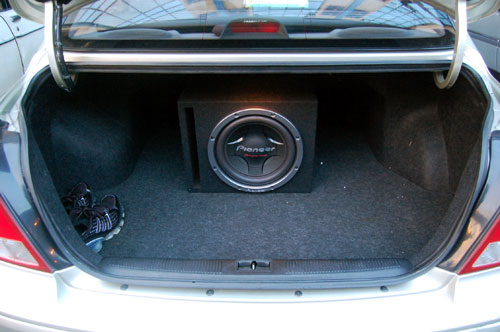 This 12″ woofer from Pioneer was the final piece of upgrade I bought for my car. This baby is capable of handling up to 1200W, but costs me RM400 for the privilege of having my whole car shake when I play some big bass music.
The guy at the garage also charged me another RM150 for wiring, enclosure and installation. Fair enough, since he did quite a good job at it.
At least now, I got one tricked-up car audio system and a subwoofer strong enough to blow panties off. I especially love it when I put on some hip-hop music and turn the volume right up. It’s like I got the whole Zouk happening in my car, and everyone is invited. The audio quality is the simply best I have experienced, and I haven’t even finished tuning it yet.
The delivery was so crisp and clear, it sounded as if Mariah Carey was in my car singing next to me.
It makes me really happy. But it also makes me so sad because everytime she sings Touch My Body, I turn around and she’s not there for me to answer her invitation. 🙁 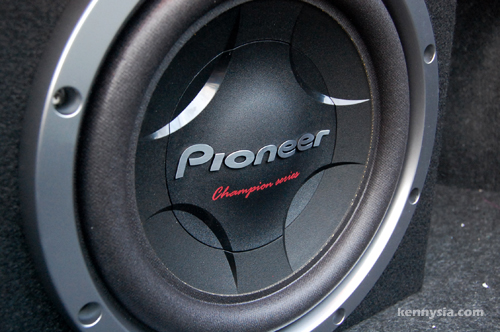 All together I paid RM3,200 for my new toy.
Die lah confirm I’ll be eating grass for the next three months.

Apparently, my Singaporean friends were very convinced that terrorist mastermind Mas Selamat has escaped into Malaysia.
When I asked them how they could be so sure, they said that everytime they go to Malaysia, the sign there reads “Selamat Datang Ke Malaysia”