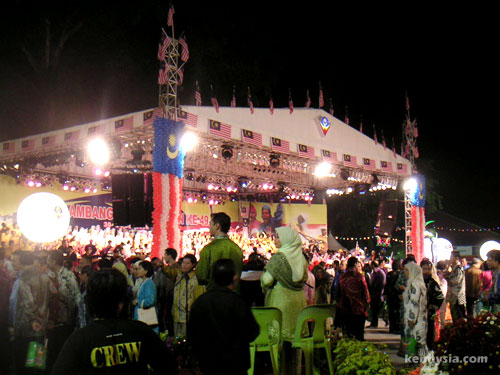 It is actually factually incorrect to call today the 49th birthday of Malaysia. 31st August is the day Malaya (ie Peninsular Malaysia today) gained independence from the Brits, which is irrelevant to us in the eastern states. 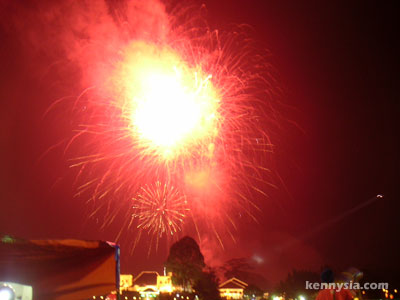 The birth of Malaysia did not occur until 6 years later when Sabah and Sarawak joined in, so in truth it’s more appropriate then to celebrate Malaysia’s 43rd birthday on the 16th September.
But nevermind, we’re just two insignificant small fries here with lots of trees and orang utans anyway. 😛 Who are we to influence the decision of the majority from the Peninsular right? 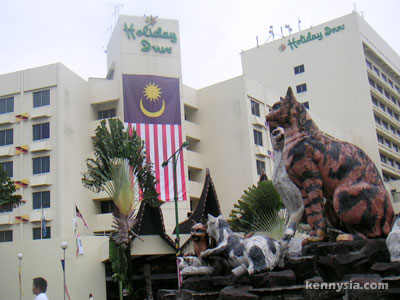 Our humble little city seems to be pulling out all the stops to impress the big wigs on the big day. Weeks before the official celebration began, all the roads were built, buildings re-painted and flags adorned. Policemen and ambulances were on standby at every corner of the street. The scale of things were unlike anything I’ve ever seen before in Kuching. Naturally I’m excited.
I was just finishing my workout at the gym in Hilton yesterday when I saw this car parked outside the hotel. 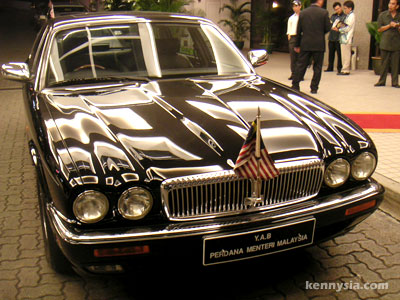 When you’re the Prime Minister of this country, you don’t need a numbered carplate like the rest of us commonfolks do

Apparently the leaders of this country were all staying at Hilton. Judging by the number of bodyguards with wired earpieces around the hotel, security must be pretty tight. I was pissing my pants just holding my camera, afraid that they might find me suspicious and decide haul me away for “interrogation”.
Lucky that didn’t happen. I managed to catch a glimpse of the big man on his way to dinner, accompanied by the Chief Minister of Sarawak along with his angmoh wife Laila. 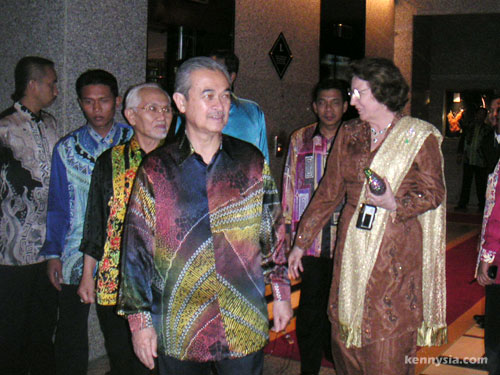 This is Abdullah Ahmad Badawi, the Prime Minister of Malaysia. He’s the elected leader of this country, and dare I say, the most well-respected as well. Dr Mahathir may be known for his straight-shooting fiery tongue, but I much prefer Badawi’s gentle demeanor and style of leadership. 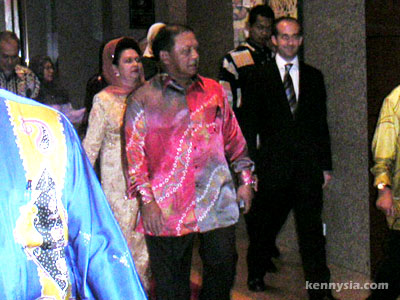 This is the King of Malaysia. He’s the one we always sing about in the 5th verse of our national anthem. The man owns this country, literally.
His name is … Yang di Pertuan Agung Tuanku Syed Sirajuddin *gasp* Ibni Al-Marhum Tuanku Syed *gasp* Putra Jamalullail
*pant* *pant* *pant*
Gosh, I hope they don’t name a road after him. We don’t really hear much about our King. All we see is His Majesty’s portrait in our government buildings all the time. There’s never a Prince Charles-like scandal or Prince Harry-type partying antics reported in the tabloids. Word off the streets is that our King of Malaysia leads a simple life, is a fan of Tottenham Hotspurs and enjoys singing karaoke.
Yes, the King sings karaoke.
Makes you wonder, what kinda song he sings during karaoke. NEGARAKU!? 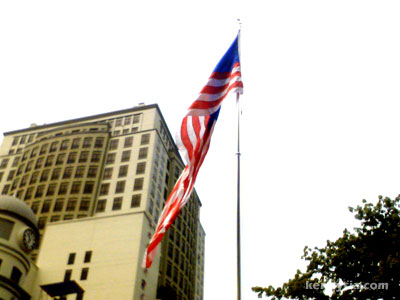 I missed the bulk of this morning’s celebrations at the Padang Merdeka because I woke up late of technical difficulties. 😛 But I was there in time to catch some of the more bizarre parade floats, like this one depicting a ferocious mechanical tiger. 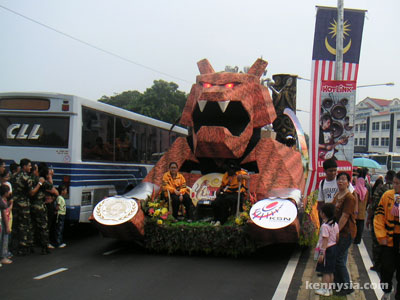 And this one showing a man making love to an Iban shield. 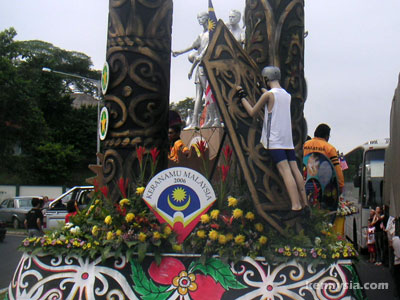 Oi, not in public can?

Anyway, when I finally made my way to the Padang, a policeman stopped me in my tracks. “Sorry, this place is for VIPs only.” he said.
What! You mean we Kuching people put up with all the traffic jams this past few days and we’re not even allowed to enjoy the performances and festivities? What kinda logic is this! 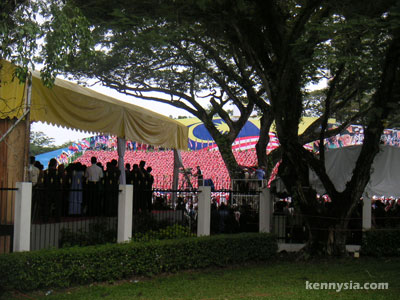 So I stood there at a distance enjoying only as much as a peasant like me could enjoy with my view all blocked by trees and tents of those ladida VIPs, before I finally got frustrated and did what only a man deprived of his Merdeka parade-viewing pleasure would do.
I put on my Australian accent, posed as a foreigner and snuck into hotel nearby. 😛 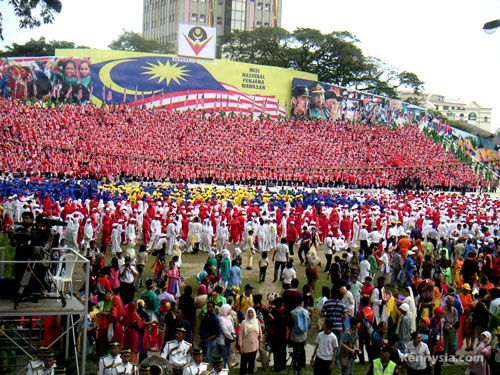 The show was alright. Crowd was loud and rowdy all throughout. I reckon it looked grand on TV. Rumour has it that the federal government spent several million ringgits organising this event, and it shows.
I managed to get inside the Padang after the show and to have a look around. 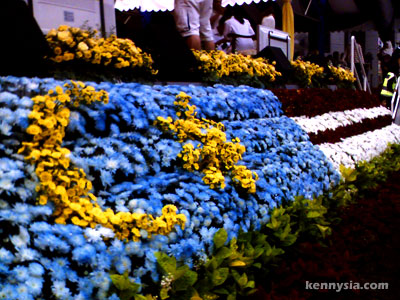 This is the decoration in front of the King’s podium. They’ve got red, white, yellow and blue flowers nicely arranged into the shape of the Malaysian flag.
Then a few minutes later I saw this aunty walking casually down the street. 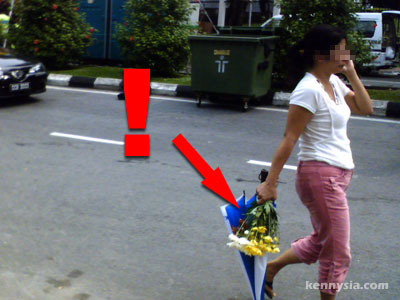 The aunty actually went in there and stole the flowers off the podium!
Merdeka!

The tagline for Malaysia’s National Day celebrations is “Keranamu Malaysia”, meaning “Because of you Malaysia”.
The disturbing thing is, everytime I saw that tagline, Kelly Clarkson popped up in my head suddenly and started singing “Because of you I never stray too far from the sidewalk…”

125 Replies to “Merdeka Celebrations in Kuching”