I often lament at the fact that I have a non-existent social life in Kuching.
The eight years I spent living abroad meant that I’ve lost contact with many of my old friends that I was once close to. Eventhough Friendster had helped me get back in touch with some, somehow it just wasn’t the same anymore. I regret not maintaining that friendship when I left for Perth. I regret not keeping in touch with my old friends as I gain new ones. If there’s anyone reading this who is about to go overseas, please do not end up like me.
When I was in Perth, the weekend meant hanging out at Moon Cafe with Jacky, Tiffy and others, or the occasional alcohol excursion to Mustang Bar with Dine and David. Now that I’m in Kuching, the weekend meant staying at home having an intellectual discussion with my bedroom wall. 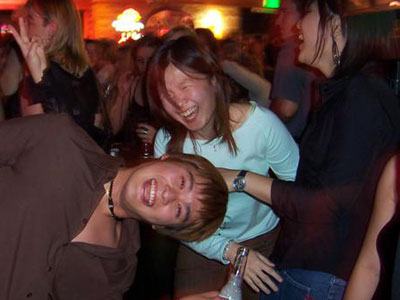 The Mustang Bar – where the world turns 90 degrees to the left.

Which is why when I heard that Kimm is coming back to Kuching, I’m excited. Excited, not because I finally get to meet her. Excited because Kimm practically knows half of Kuching and hanging out with her means that my social life will easily be revived in no time. Yes she’s my stepping stone like that. 😉 jk, of course.
I’ve mentioned Kimm a couple of times in the past, usually as a subject of my practical jokes. I got to know her through Nicole about 4 years ago and we’ve been talking on and off. Actually ‘talking’ is the wrong word to use because most of the time we’re shooting arrows out of our mouths at each other. But no lah, she’s a nice person really – my long-time friend, short-time blogging buddy, and all-time ‘NUDGE’ function abuser on MSN. Man, I hate it when she nudges me on MSN. 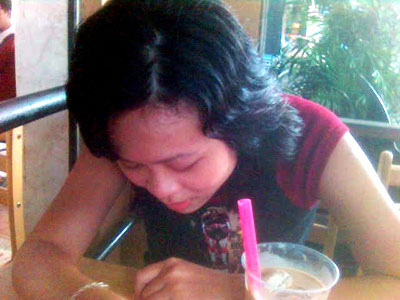 I’m so boring Kimm fell asleep listening to me.

There’s never a dull moment when you have friends like Kimm and her sister Melissa around. Probably because they’re never short of whacky tales to share. Melissa for example, once shared with me this ridiculous but true story. Since she urged me to blog about it, I shall do so.
*~*~*~*~*~*~*~*
See, Melissa has (or rather, had) this rather showy friend of hers who one day, for absolutely no reason at all, made a bet with her. The bet was that Showy Friend would lose his weight in 6 months time and if not, he will buy a new phone for her. Melissa, figuring she had nothing to lose, nonchantlantly agreed with him. 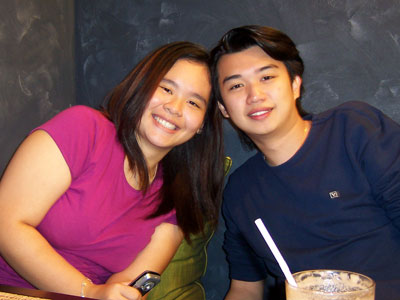 Here’s a photo of Melissa and me… yeah, I WISH! My balls shrink when better-looking guys like that are around me. That’s Eric btw.

Fast forward six months later, Melissa got a call from this friend who not only did not lose weight, BUT GAINED WEIGHT INSTEAD. So Melissa asked for her phone. He hesitated. She requested a cheap model. HE SUGGESTED A MORE EXPENSIVE ONE. She requested the expensive model. HE COMPLAINED ITS TOO EXPENSIVE. What the foot?!
In the end, they decided to settle on cash. With his newly acquired credit card, Showy Friend withdrew a large sum of money from the ATM, counted RM700 loudly in front of Melissa and gave her the cash for her to buy herself a brand new Sony Ericsson. 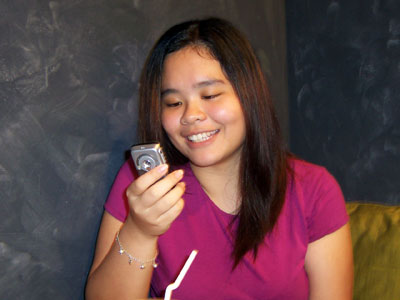 Man, I don’t know whether to laugh at the absurdity of this story, or cry at the fact that stupid people like that exist on this planet.
*~*~*~*~*~*~*~*
Kimm wasn’t as fortunate as her sister though.
Kimm: “I’m so screwed. Barely two hours back in Kuching and I put a dent in the car. Funny thing is, I didn’t even drive it to bang it.”
Kenny: “Huh? What happened?”
“Well our gate remote control was broken and the gate would open and close for no reason. My dad asked me to put the remote control in the fridge but I didn’t. So when my dad drove the car in, the gate suddenly closed and kena our car.”
“HUH? Put the gate remote control in the fridge? What?”
“Yalah. ‘Cos the remote control go mad when its hot. Dad asked me to put it in the fridge.”
“WHA…!? And that’s supposed to fix it? Why don’t you put your Dad into the fridge instead?“ 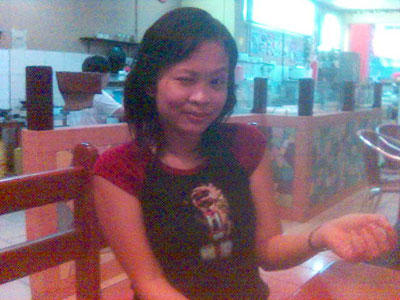 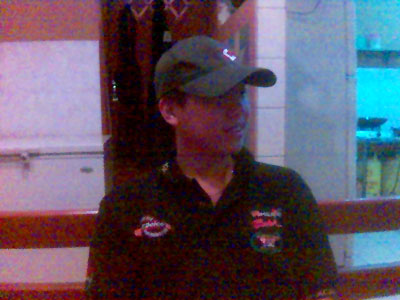 GAMBs aka KENie aka ‘The other Kenny’ aka ‘The Smaller Kenny’… which means I’m the ‘The Bigger Kenny’. Go figure.

I don’t get it. Kimm and Mel are not the only people I know who own driving licenses but don’t drive at all.
Its a virus-like trend these days.
Kid turns 17. Parent urges kid to get a driver’s license. So, kid goes for driving lessons, kid does the theory test, kid passes all examinations, kid goes home happily with new driver’s license.
Then kid asks permission from parent to drive the car. Fat chance. PARENT BANS KID FROM DRIVING!
Fast forward to 2 years later, kid completely forgotten how to drive. The P-plate license is up for renewal. But guess what? PARENT ASKS KID TO RENEW THE DRIVING LICENSE!
In all seriousness, what the heck? Having a driver’s license but not allowed to drive, is like having an asshole but not allowed to shit.
Man, I don’t understand people these days.