WARNING: Sense-of-humour strongly recommended before reading any further.
Was it just me or did everyone else noticed that Malaysia’s Most Influential Blogger Jeff Ooi seems to get all his dirty backstage scoop from his trusty little bird?
Someone once mentioned that I should get an award for making the most references to my own testicles in my blog. But seriously, that someone got to look how many times Jeff Ooi mentioned his ‘little bird’ in his blog. 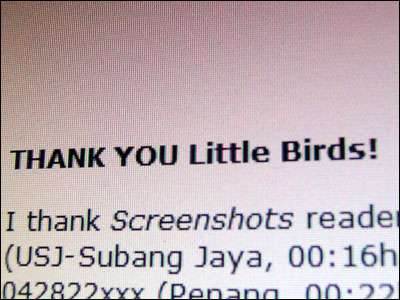 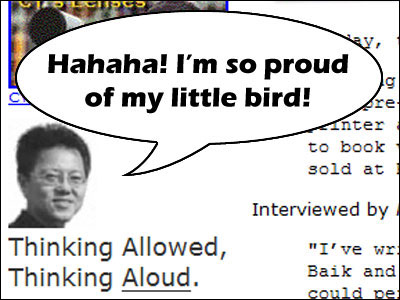 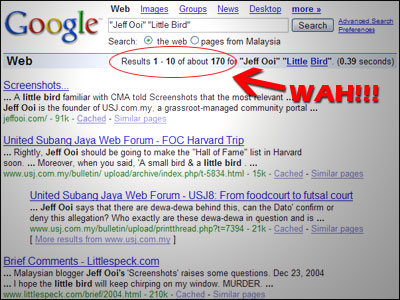 WOW! Why is everyone talking about Jeff Ooi’s little bird ar? His little bird so ‘geng’ meh!?
I wonder how come no one interested in my little bird? What is wrong with me? I ran a search on Goggle with “Kenny” and “little bird” and I got this instead. 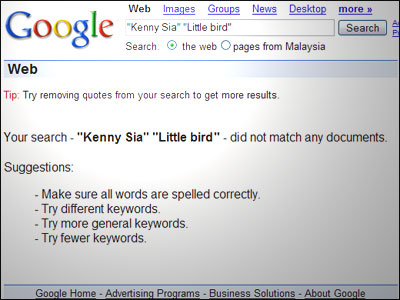 WHY ISN’T ANYONE INTERESTED IN MY LITTLE BIRD.
Geram.
So I adjusted my underwear and asked.
Kenny: “Oi, little bird, what’s wrong with you lah? Why can’t you be more like Jeff Ooi’s little bird and fetch me gossips every now and then”
*silence*
Kenny: “You fucking useless one you know? Goddammit, you ‘piss me off’ everday! I’m so sick of you”

*still silence*
Kenny: “Oi! Little bird I’m talking to you lah!”
Kenny’s Bird: “Fuck you Kenny. And stop calling me ‘little bird’ will ya?! For the record, its BIG BIRD to you ALRIGHT?!” 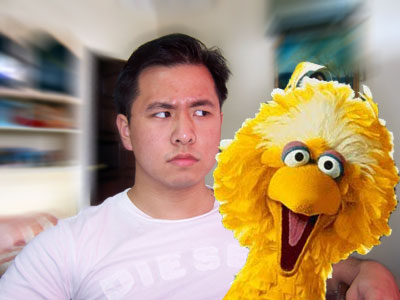 UPDATE: Thanks to minishorts (totally hot), yours truly is now immortalised into your favourite bedtime story. 🙂 You MUST check her out. Thanks, mini!