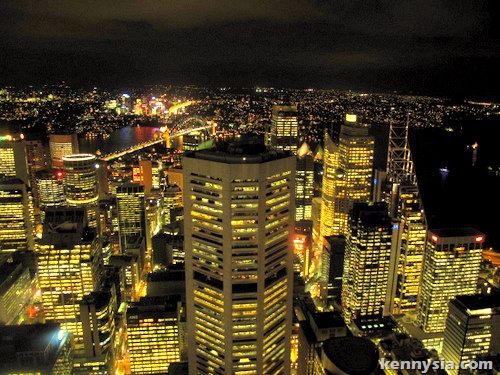 But I was there 2 weeks ago on the invitation of Tourism Australia.

Sydney, in the Australian state of New South Wales, is a cosmopolitan and lively city completely different from the peace and tranquillity we experienced in Tasmania. 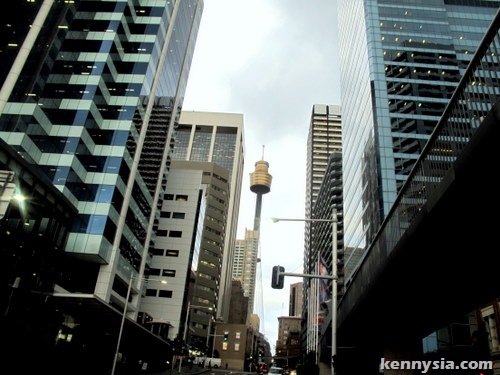 Here, you see men in suits walking down the streets alongside Asian students. There’s a cafe and convenience store around every corner. And traffic is always a problem.

Sydney has all the elements one would expect from a major capital city: great shopping, good public transport, brilliant nightlife and two of the most famous architectural symbol of Australia – the Sydney Harbour Bridge and Opera House. 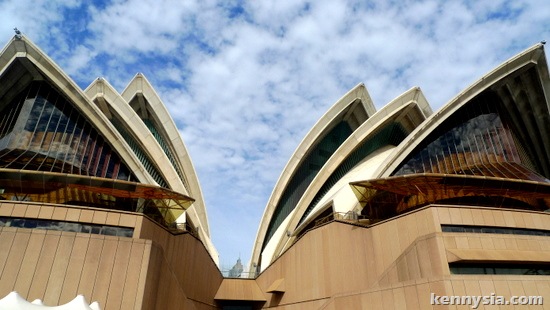 Most people would be happy just taking photos of themselves outside the Sydney Opera House. We kiasu, so we did the guided tour inside, but it’s okay only lah. I reckon it’s something only cultural buffs would enjoy.

If time permits I would’ve got tickets to watch a performance inside because the acoustic inside is awesome. 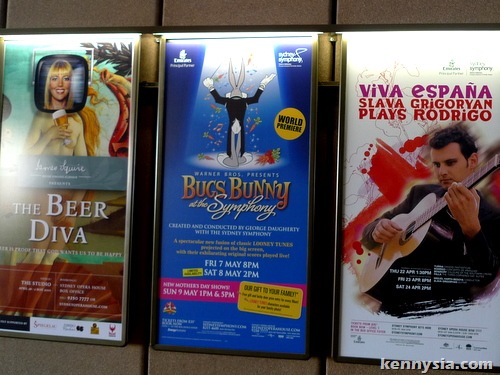 The Bugs Bunny one looks good.

Anyway, this wasn’t my first trip to Sydney. 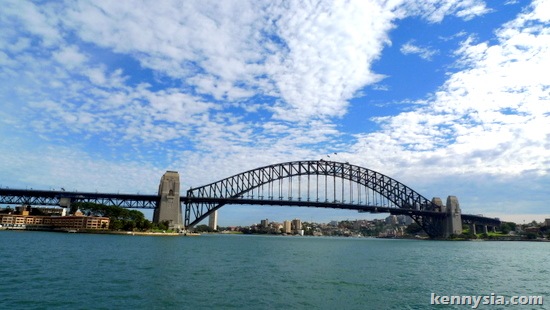 I had been here twice before. Both times, there was one thing I had been DYING to do – simply because I can do it only in Australia.

Back then, I was a student so I had no cash opportunity to do it. This time I DID IT. 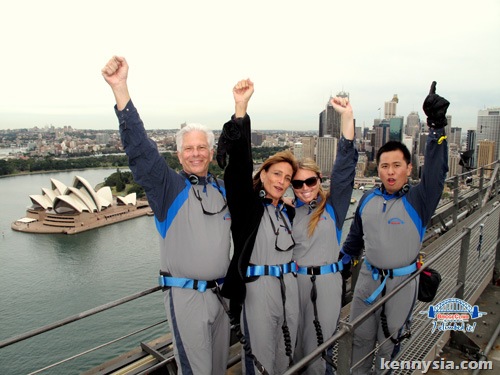 The experience was truly extraordinary and unforgettable. Contrary to popular belief, the climb wasn’t difficult at all. 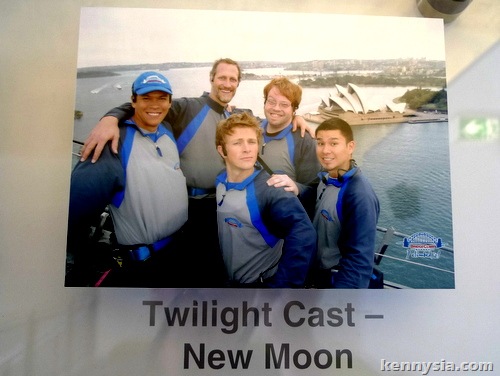 I mean, if Edward Cullen a bunch of vampires can do it, surely I can too.

It’ll take about 1.5 hours walking along pre-fabricated pathways to reach the top of the Sydney Harbour Bridge. The 360 degree view right at the top was absolutely breathtaking. 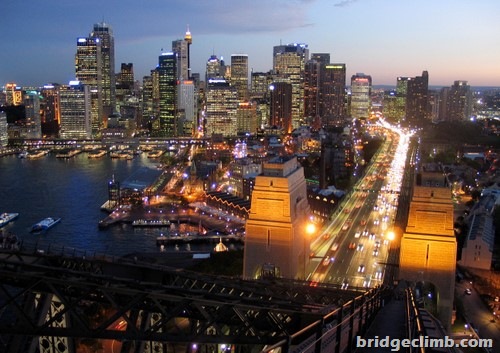 BridgeClimb is the only company offering this unique adventure.

At AUD$188 (RM 564), the price is steeper than the climb. Then again, it’s Australia and the company adhere to very strict safety standards. I was constantly hooked on to a safety railing.

Unless I’m damn stupid, nothing I do would make me fall off and die. 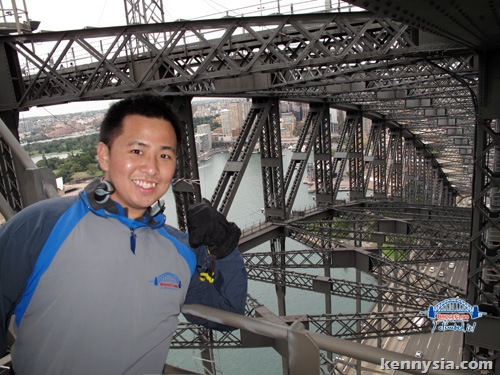 Anyway, climbing the Sydney Harbour Bridge sure make for great conversation when you get home.

Friend: WAH! You went to Sydney ah? Did you take photo of the Harbour Bridge.
Kenny: Yeah, but not only that. I CLIMBED THE FREAKIN’ THING!
Friend: !!! 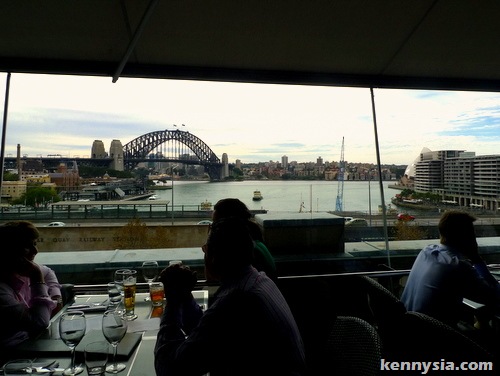 It’s a pity that most people who travel to Sydney seldom venture out of the city.

Just a short 2 hour drive away, is a place called Blue Mountains.

Blue Mountains a world completely unlike the modern skyscraper jungle that is Sydney. This is where some of Australia’s best natural wonders call home. 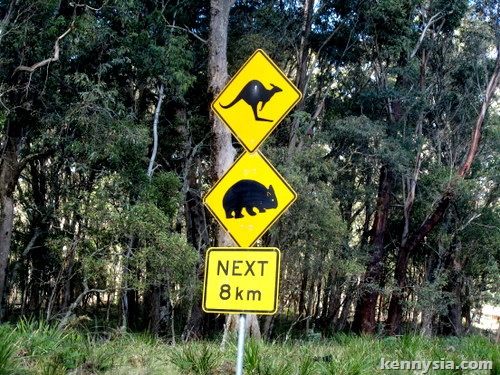 The journey to the Blue Mountains was as almost exciting as the destination.

On our way there, we passed by a lot of quaint small towns. We stopped by this 200-year-old abandoned ghost town called Hartley. 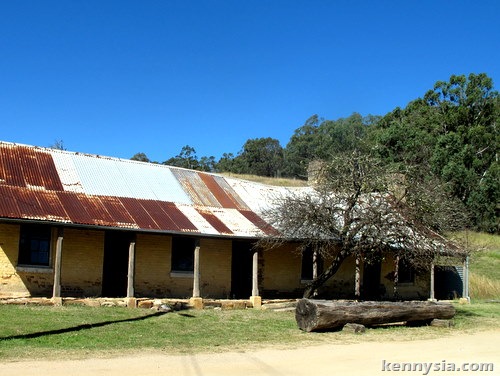 The Australians preserve this village so well, it looks almost exactly the same as it was 200 years ago.

Heck, even the location of the horse feed was that same.

You can compare it with this old photograph below. 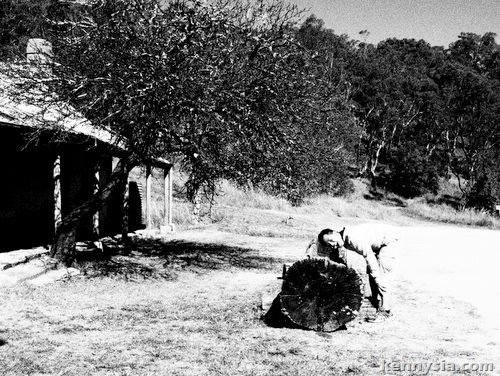 Oh wait. That’s not a horse.

The truth is, tourism in the Blue Mountains has been around since 200 years ago. People from that era used to travel to the Jenolan Caves, which is one of the most spectacular cave systems worldwide. 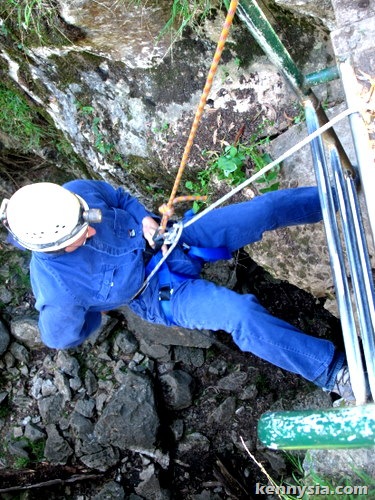 Although I grew up in a Malaysian state famous for its caves, I had my first ever adventure caving experience right here in Australia.

In the past, my caving experience consists of walking to a hole in a mountain smelling bat shit.

Adventure caving means I have to wear on an overall, put a hard hat, then abseil, climb and crawl through rocks, dirt and bat poop. 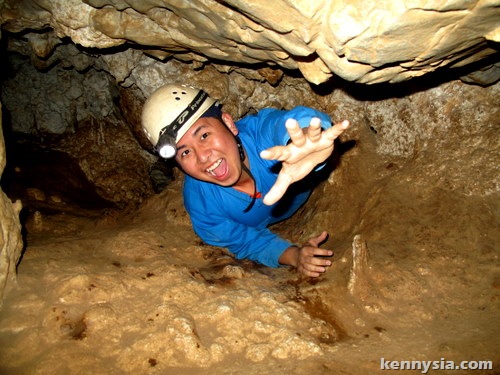 Squeezing through rocks was a real challenge and by no means easy. But I did it.

It’s a bit like squeezing through the crowd at Zouk Club on a Saturday night – without the pleasure of surrounded by hot babes around you.

Strangely, I find the journey into the underground surprisingly fun and rewarding. that;s because I was seeing something only the privileged few get to experience. 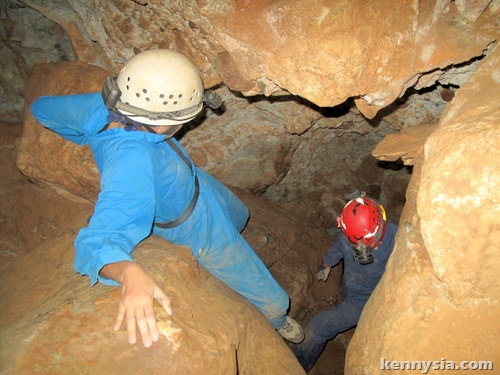 Apparently, people are already exploring caves for tourism even way back in the 1850s. The only difference is, people those days wore just their street clothes and held a candle for light. Often, they’d sign their names on the cave walls.

Those inscriptions would remain for the next 100 over years. 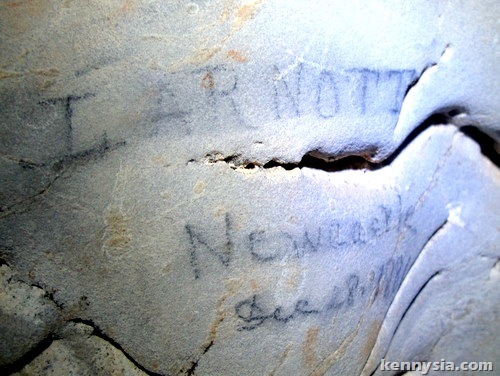 This “L Arnott’s” father eventually went on to create the world’s most delicious chocolate biscuits.

Then of course Nintendo invented video games and after that nobody really gives a hoot about caving anymore. 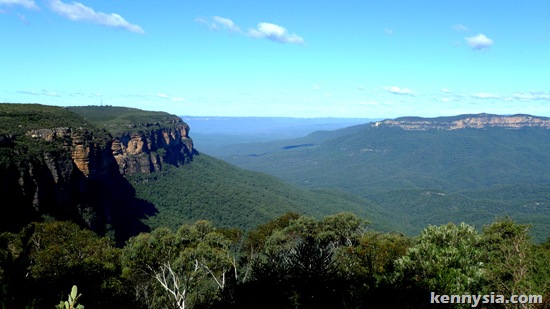 This views here are just majestic and jaw-droppingly beautiful. It’s almost like the Grand Canyon, with more trees, life and fresh air.

Trust me. No matter what I say, how many words I write and how many photos I show, nothing can truly prepare for the sight of the Blue Mountains in person. 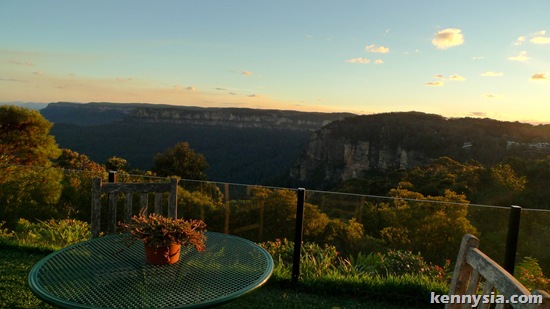 In order to truly appreciate the beauty of Blue Mountains, I recommend staying over at one of the many Bed & Breakfasts over here.

The place we stayed at was Echoes Boutique Hotel and it was simply the most tasteful luxurious accommodation throughout our entire ten days in Australia. 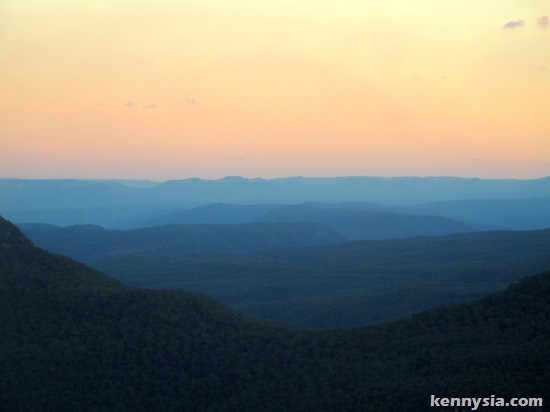 The sunset views over the Blue Mountains was worth the trip alone.

As if the Blue Mountains were not spectacular enough, some local folks cook up a fairy tale to give the place a mystical edge. 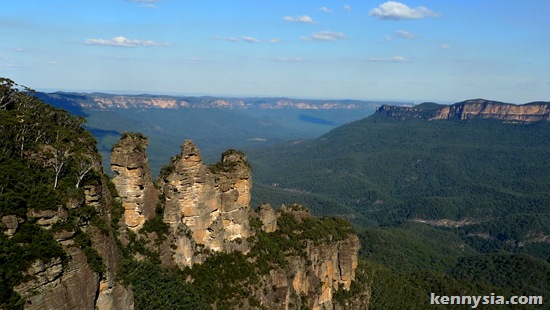 This rock formation is known as The Three Sisters of Katoomba. It is the most popular attraction at the Blue Mountains.

Millions of tourists flock to the Blue Mountains to see these sandstone erosion. But then they also got to hear this bollock of a story about how three human sisters were actually turned into sandstone by a jealous witchdoctor.

Heck, they even erected statues to commemorate this obviously fabricated story. 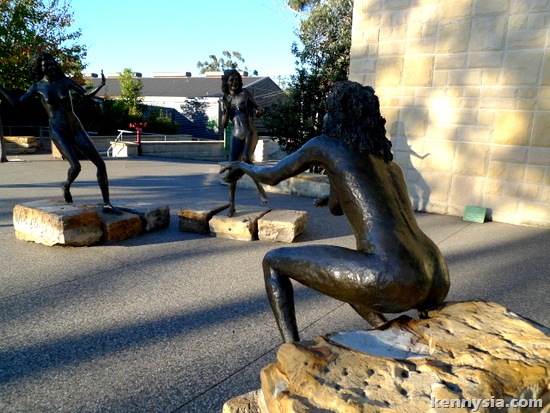 Well, you be the judge.

This is The Three Sisters rock formations. 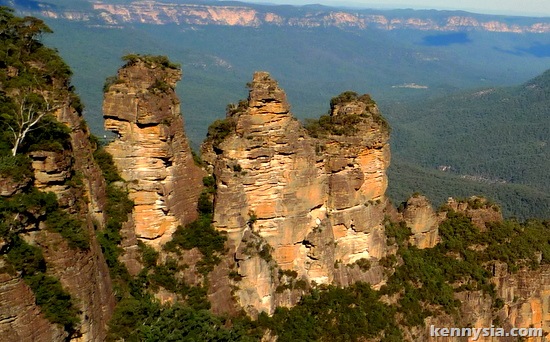 And The Three Sisters statue. 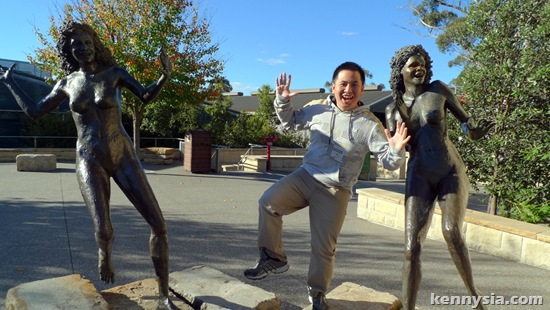 AD: I bursted out laughing watching this episode of Project Alpha. Whoever can guess which contestant on Malaysian Dreamgirl Cheesie “absolutely hates” wins a virtual hi-five from me.

Project Alpha is presented by Adidas Action 3 and supported by P1 and MAS.