I’m pleasantly surprised by the response I’ve had so far. I’m referring to my previous post where I encouraged people to blog about things that make them happy, simply because there’s so much negativity at the moment.
Thus far, I had three responses. Count them, THREE. Holy Wow. That’s like three times more responses than I expected!
Without visualizing me standing on the podium receiving my Oscar Award, here goes…. 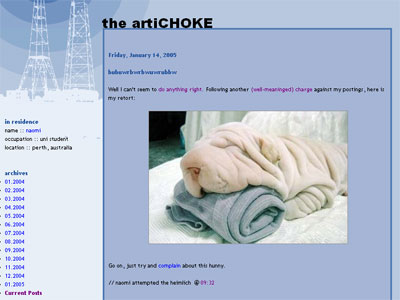 Thank you sweet Naomi. No, I can’t complain about your dog. Makes me wanna jump in the shower and dry myself off with it. 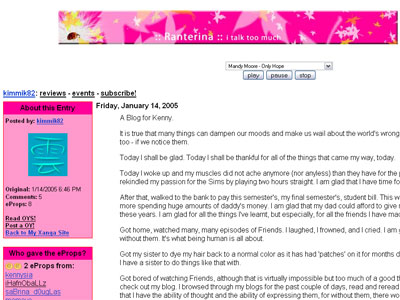 Thanks for publicly advertising my site, witty Kimmik. You successfully kicked off a campaign that made everyone wondering “Who’s this hot Kenny that she’s talking about?”. Boy, can you imagine how disappointed they are when they found out how I look. Seriously though, I swear there’s more people visiting my site because they clicked on the links off your xanga than there are people visiting my site because they actually know me. You’re already like CNN even before you become a journalist. 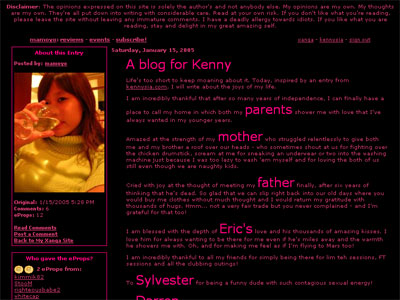 The most unexpected response I have received is actually from a very sassy girl from Miri called IngHui. I’ve only heard about IngHui through Kim and Irene. Her sense of humour shows in her writing, and that makes her entries a great read in the morning to start off my day. Thanks IngHui, and I sure am glad you’re back.
Life sucks, we know that. But at least there’s blogs to write and blogs to read. Ultimately though, web logs are our thoughts for us to keep. Others may read it if they like or leave it if they don’t. 10 years later, we want to read back at our entries and realised that life was not as gloomy as we made it out to be. No matter how bad things seem to be, there’s always little things that makes you go “Gee, I feel so glad to be alive.”
*~*~*~*~*~*
Last Saturday, I had a men’s night out. With Nicole away in KL, David’s fiancee working evening shift and Jacky‘s errr… crush still with her bf, the three of us decided to head to town for some drinks. I’m not keen on going to Mustang Bar, which is our usual pub, so we decided to head down to this new place called The Monkey Bar in Perth’s commercial district. Off we went wearing our nice collared shirt, smart jeans and good shoes. 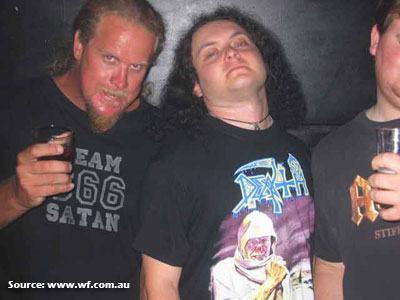 The unusual thing that evening was that amid the well dressed rich businesspeople from the surrounding pubs, there are groups of obvious heavy metal fans dressed in their black goth Marilyn-Manson like outfit, complete with heavy silver chains and jewellery. Considering that its such a warm evening to be dressed in black, I salute them for their commitment to their subculture.
We arrived at the Monkey Bar, the bouncer gave us a weird look and let us in. What did we see? 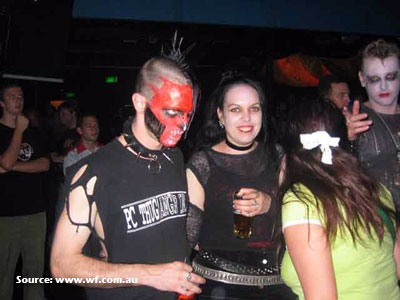 All dressed in black and looked like they’re ready to devour our pity little souls. We felt so totally out of place. In our unsuccessful quest for good music and good alcohol, we visited HELL. 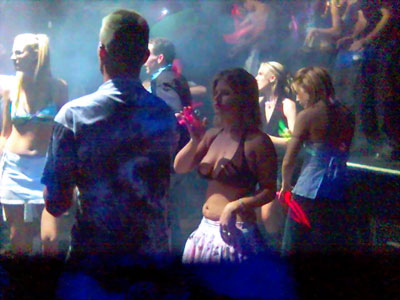 We ran for our lives. Luckily for us, our night ended in The Rise Dance Club where there’s an Ibiza Beach Party going on. That means plenty of girls in bikini (and plenty of wardrobe malfunctions as well) ;). Ahhhhh… You can say that we’ve been through hell and found heaven in the end!