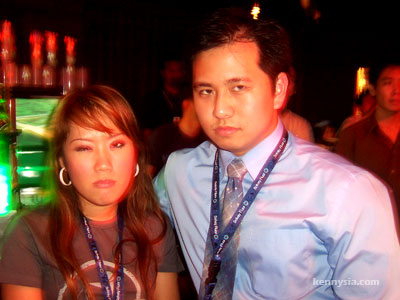 A new hater is born after viewing this pic.

XiaXue: people dun like popular people la
XiaXue: simple as that
KennySia: there’s this girl
KennySia: who used to like reading me.
XiaXue: then
KennySia: as soon as i come back from s’pore last time and posted my pics with u
KennySia: the hate comments start coming in
XiaXue: lol
KennySia: now she’s going around leaving anti-kenny messages
XiaXue: doesnt matter
XiaXue: i’m sure there are more people from my blog who ended up liking u, than people who were originally read ur blog now disliking u
KennySia: that’s true.
KennySia: kinda offsets it
XiaXue: people like her
XiaXue: are just flippant
XiaXue: why would u want readers like that
XiaXue: siao one
XiaXue: i also want
KennySia: u got lots eh
XiaXue: i got many messages last time
XiaXue: “i used to like xiaxue, but after she write about city harvest etc i don’t like her anymore”
XiaXue: the most ridiculous was S.H.E 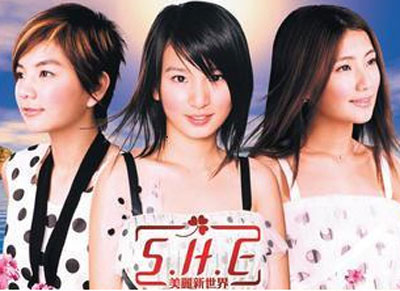 XiaXue: hello?!
XiaXue: i didnt even write bad stuff about them
KennySia: ppl want u to agree with them
XiaXue: i only say that their clothes look like kotex wrappers
XiaXue: which they did
XiaXue: black and white polka dots
KennySia: some ppl are a tad bit sensitive
KennySia: when i wrote about Miss Slovakia’s face looking ‘plastic’
KennySia: she wrote back to me telling me she never had plastic surgery.
KennySia: kns
KennySia: and that kanina Steven Lim left a message on my tag board.
KennySia: asking me to promote him 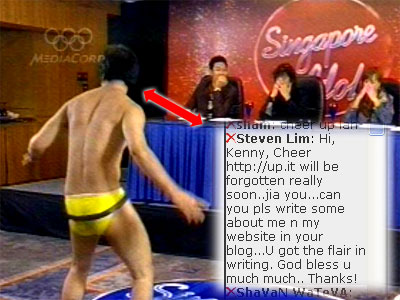 There you go Steven Lim. You asked for it.

KennySia: wahahaha
XiaXue: yuck
XiaXue: why ur stupid face always got this benign grin one
XiaXue: like those priests kind
XiaXue: must always be caught with a kindly face 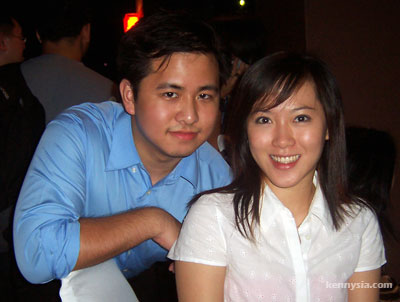 My kindly face. And Silly Celly.

KennySia: yaloh
XiaXue: U look like u are about to say
XiaXue: “I BESTOW UPON YOU!”
KennySia: “PRAISE THE LORD!”
XiaXue: “MY BLESSINGS!”
KennySia: hahahaa
KennySia: friend of mine said i have the tai ko (big brother) look.
KennySia: do i really look like someone who’s never gonna do evil stuff?
XiaXue: yes
KennySia: shit
XiaXue: thats why people oppose to u taking photo with spg
XiaXue: lol
XiaXue: if its bigfuck i’m totally fine 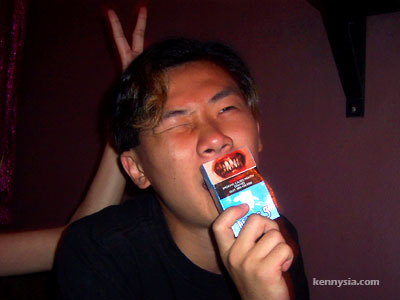 XiaXue: poor u
KennySia: yea i am so “blessed”
XiaXue: its not only ur face la
XiaXue: u are not a se (sinister) person
KennySia: thing is
KennySia: i am capable of doing sinister stuff once in a while
KennySia: but ppl dun expect me to do that ‘cos of my face.
KennySia: i look like someone who’s never gonna upset anyone
XiaXue: but u will have people saying u bhb (thick skin)
Now wait a minute. Have I missed something here?
Is there really such a notion that people who look one kind would do some things but not others? That’s stereotype isn’t it? I thought people have learnt a long time ago that looks can be deceiving. 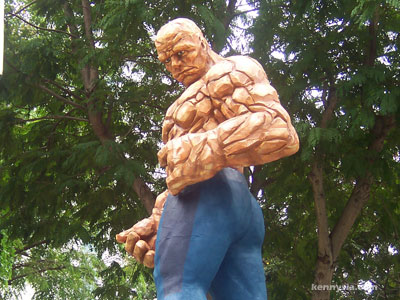 “He doesn’t look like the type of guy who would do that kind of stuff.” I hear that a lot. Being born with a kindly face does have its benefits sometimes. I was rarely stopped by the police; I can walk through customs very easily; and people trust me with their babies.
As much as it can be flattering, a lot of times I feel restricted by people’s expectations, simply because of how I look.

“I can’t believe he’s the type who frequents nightclubs.”
“Wah you see he did this and that with this girl that girl so many girls.”
“OMG, he bared his top for the whole wide world to see!”

I can understand where people are coming from. If I look like Robbie Williams and I did what I did, people wouldn’t give two fucks about it at all. At best what I’ll probably hear is, “Ahhh… that’s just Kenny being Kenny, ya know? No big deal.”
The problem is, like Wendy said, I look like a frickin’ priest. And priests don’t pose intimately with girls. They pose intimately with boys.

Feeling dejected, I consulted FaceAnalyzer.com to see if its true that I look like a typical good guy. 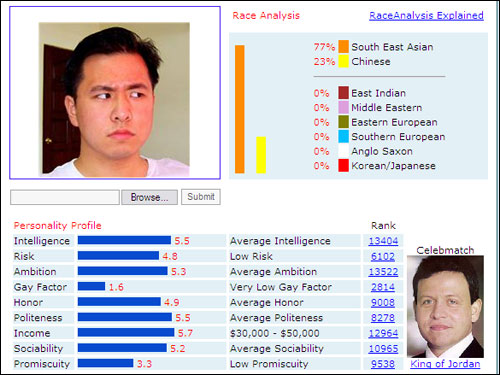 Average Honour, average politeness, average sociability, low promiscuity (heh). All in all, I’m pretty much the average joe.
How about the ‘Big Fuck’? 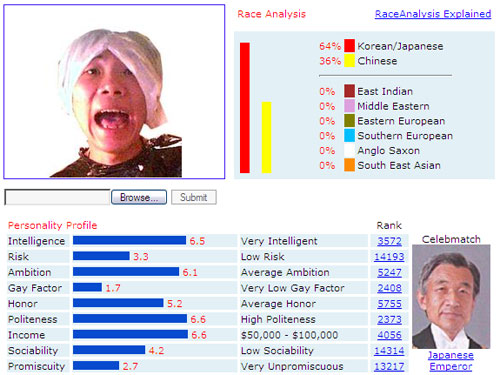 Get this, he’s very polite, doesn’t socialise as much, and VERY unpromiscuous (!). To top it all off, he’s smarter than me, more ambitious than me, and gets paid helluva lot more than I do. This, my friends, is coming from a guy who once posted a photo with his underwear on his head. 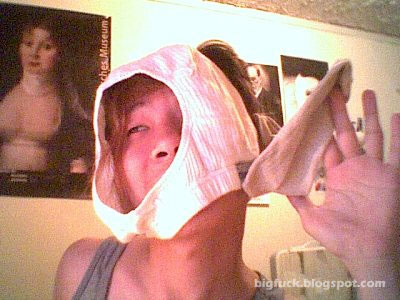 Tell me Wendy, who would you rather bring home to your mommy? 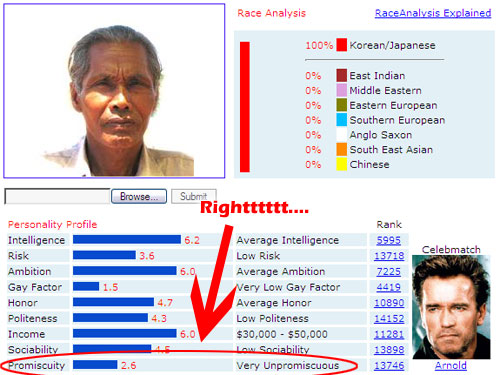 Stayed up till 1am last night fixing bugs on this site. Happy to say, all the bugs are squashed.