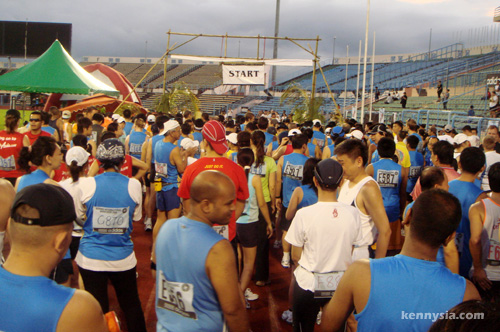 No, that was not how long I have to queue up at the complaint desk at StreamyX.
That’s the time it took me to complete 21km at the Borneo International Marathon in Kota Kinabalu last Sunday. My body is sore all over and now I’m walking like a freshly sodomised pondan. 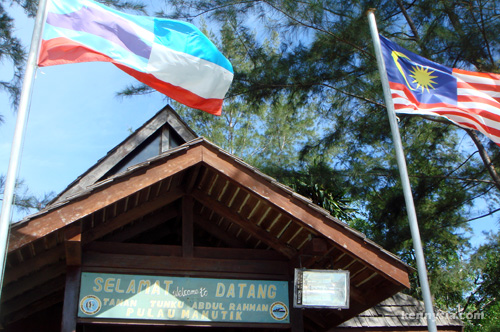 KK is as beautiful as I remember it last year.
I always say that those Sabahans up north from us have it good. Whatever we in Sarawak has, Sabah always seems to have the better version of it. 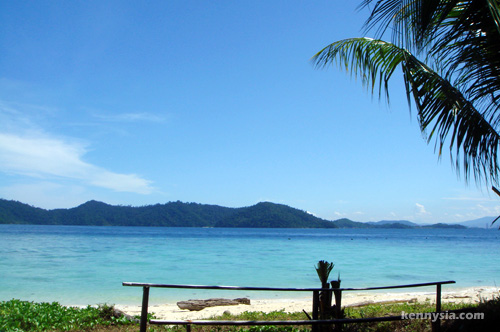 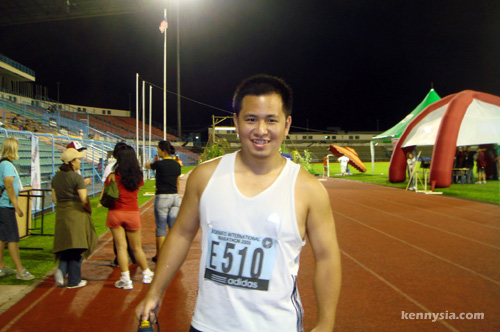 Well, Sabah can now add one more to their list of triumphs. The Borneo Marathon I did was not just a very good running event, it was without a doubt the best running competition I have ever took part in, bar none.
Yes, even the ones I did in KL and Penang cannot compare to how much I enjoyed this run. And that wasn’t just my opinion alone. Many seasoned runners who have completed in races all over the world raved about how well-organised this event was. 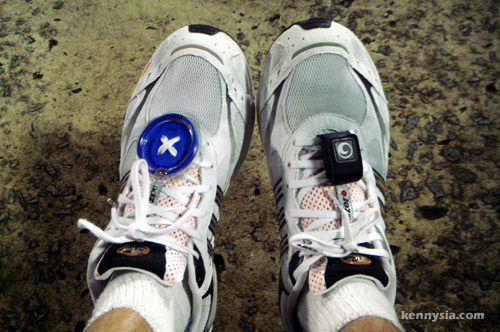 My weapon of choice: the adiZero CS shoes and thick cushion socks from Thorlos

Sunday morning, I woke up bleary-eyed at the un-Godly hour of 4am and made my way to the starting line at Likas Stadium. 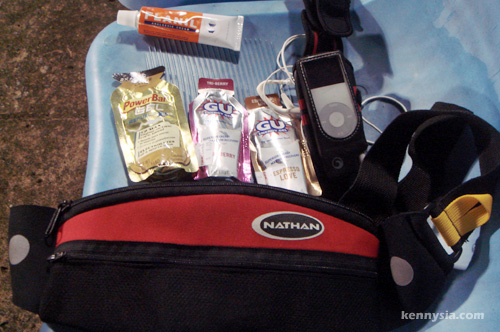 My running essentials: Energy gels, muscle rub and Nike+ hooked up to my trusty first generation iPod nano. Yes I know my iPod is ancient history, but I plan to upgrade soon as soon as Moorey got them new 16GB ones in stock.
The half-marathon race was slated to begin at 6am, and I got a good one hour to mingle around and socialise with the other partipants. 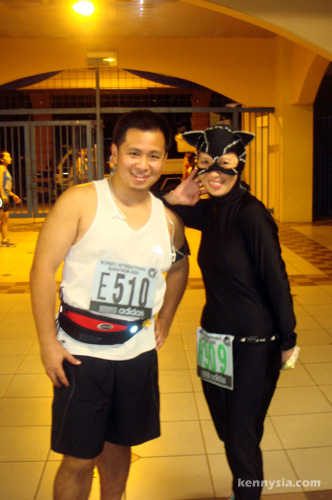 This is Jenap Said from Singapore.
When everyone else was wearing singlets and shorts for maximum airflow, she instead chose to run in a full Catwoman costume! Halloween seems to have come early for her. To top it off, Jenap had to observe the Muslim fasting month of Ramadhan and did not start proper training until ten days before the event.
But even with so many factors working against her, the 49-year-old lady still managed to kick my ass by at least 20 minutes! 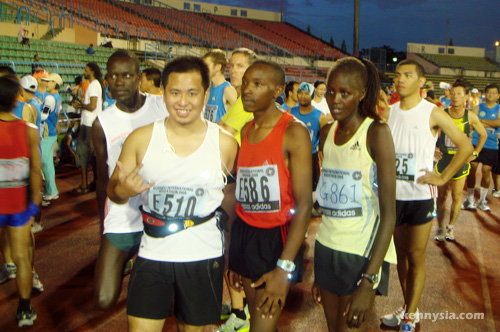 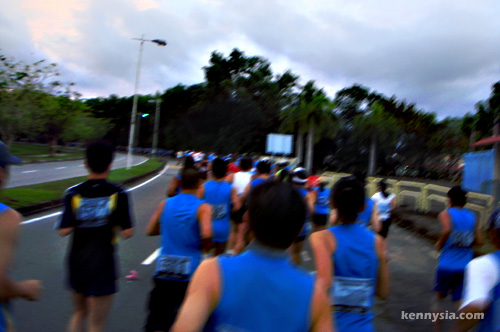 The race course in KK was a lot better than the ones I did in KL and Penang. It is a beautiful run.
The course is pleasantly flat all the way from Likas Stadium, along the waterfront to Sutera Harbour Resort, Tanjung Aru and then back. Along the way, we were treated to funky smells of the fishy central market and fascinating sights like sunrise at the water villages near Sutera Harbour.
The traffic police took care of us very well. 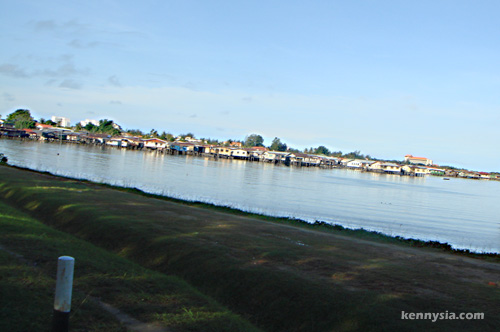 The organizers did a great job because there was never a shortage of liquid. 100 Plus and water stations are available almost every 20 minutes or so. The only thing they were short of were paper cups, but that’s ok. When they ran out of cups, we drank straight from the bottle.
When you’re thirsty, no one really cares anyway! 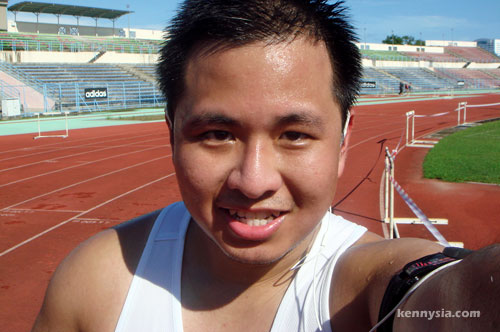 I told Shan that the only thing the organizers didn’t do well is that… IT’S TOO FREAKING HOT!
The organizers should’ve asked the sun to not be so hot!
We were well-shaded from the sun’s attack for the first 10km or so. But after 10Ks, it’s as if Kota Kinabalu was serving barbequed marathoners for lunch. 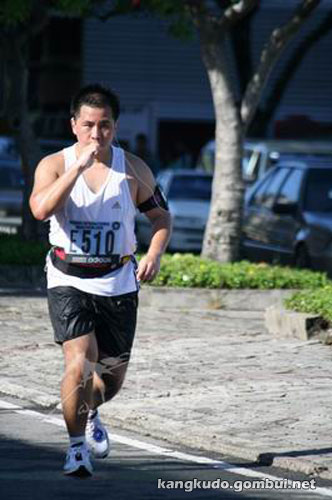 The scorching sun was sucking up every remaining ounce of energy in us and it became harder and harder to push through to the end. At 18K I felt like dying. I’m just glad I didn’t do the 42km race.
Funniest thing I saw was this guy doing the marathon while holding onto an umbrella ella ella eh eh eh. 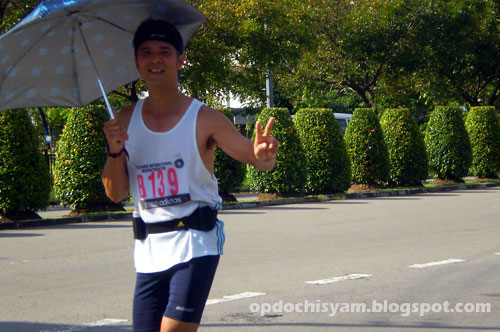 Overall, I’m very happy with my run.
I maintained a decent pace of 7 mins/km for most part of the journey except towards the end when I slowed to 9 mins/km. I may be 82kg heavy, but still I managed to stay ahead of many other runners smaller in size and more athletic than me.
My diet of bananas and yoghurt must’ve worked – no cramps in my legs nor stitches on my sides.
21km in 2 hrs 42 mins is still my personal best thus far. I crossed the finishing line feeling like I could still go on further. 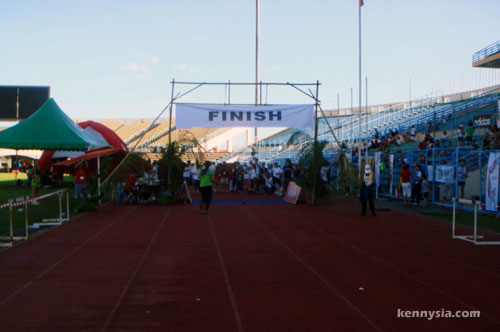 However, this 21km run is only just a warm-up.
The big race for me is still the 42km Singapore International Marathon that’s happening eight weeks time. Given my results, I’m reckon I could tackle it in 5 hrs 30 mins this 7th December. But we’ll see. 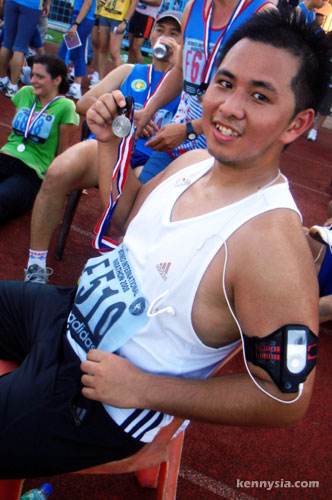 Bring on the Singapore Marathon, baby!

I find it funny that they wanna give Datukship to an actor from India just because he filmed a movie in A’Famosa Resort a few years ago and so-called “resulted in many tourists visiting that place”.
Hell, I’ve never watched Shah Rukh Khan’s movies and I knew where A’Famosa Resort is. I saw it on an ad inside a taxi. Maybe the taxi driver should receive a Datukship for promoting it.