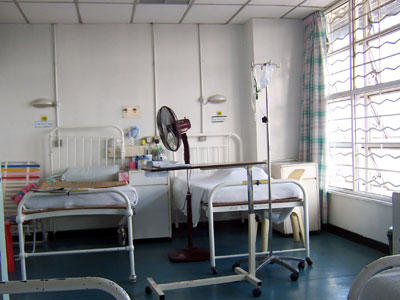 I took so much pictures at the hospital, they’re actually thinking of sending me to a hospital of a different kind

You guys are too nice lah.
I disabled comments in my last entry because I didn’t want you guys to get too concerned or worried over me. Seems like I’ve underestimated the resourcefulness of kennysia.com readers.
Its only been two days, and already my e-mail and chatterbox were bombarded with messages from well-wishers. I might take some time to reply those e-mails, but I’d just like to say that those words meant a lot to me. From the bottom of his heart (what? I have a heart?), Kenny would like to say “gam-sia”. 🙂 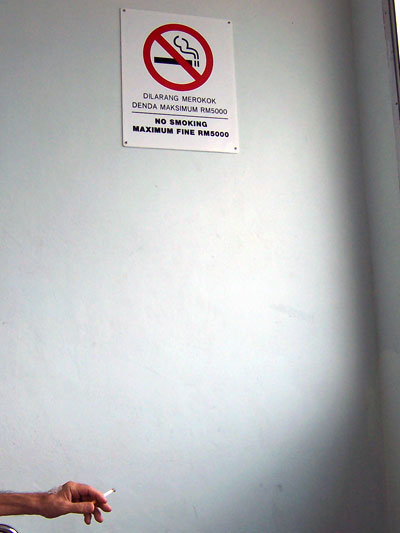 My father smoking the most expensive cigarette in the world.

Yes, I spent my last two days at the hospital with my father. In a mad coincidence of events, my mother and my brother were both out of town for other equally important commitments, my sister has her own kids to take care of, so I ended up being the only person (apart from his siblings) able to care for him. 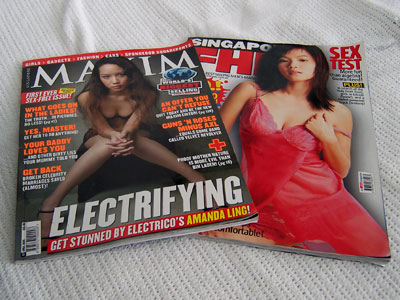 My survival kit for the next 40 hours. Yes I know its a little inappropriate but do I look like I care?

Anyway, it turned out that the wound on my father’s forehead was superficial. The reason he had to stay at the hospital for two nights was because his haemoglobin level was running low, and the blood bank was lacking fresh supplies for transfusion.
Well I was frustrated about the delay. Besides I think my father deserves only the best. So I flew to West Malaysia, slayed some young virgin girls and brought back some fresh blood for my father. 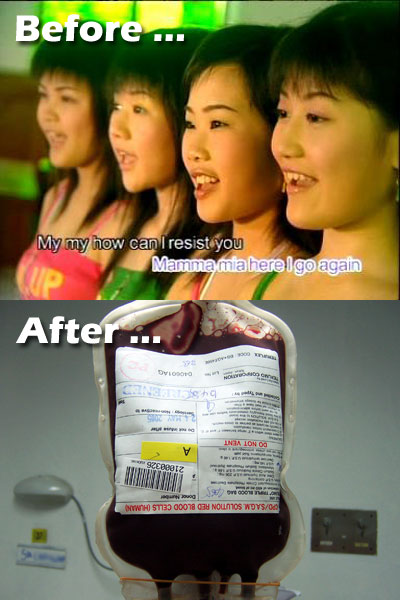 Without a WiFi-enabled laptop I had lots of fun chatting to the wall. But in my 40 hours, I’ve observed that the scene at the medical ward was interesting to say the least. Seriously, before this, I thought my bedroom was the only place in the world where people would eat, shit and sleep at the same location.
One thing I find interesting was the doctors there. 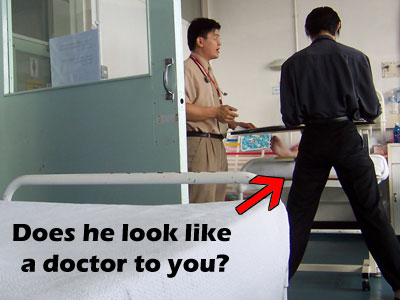 I always had the stereotype that doctors are usually big fat balding middle-aged men with that sleazy look on their face, which was why I was quite surprised to see these slim-built good-looking 20-somethings wearing the sthetoscopes, complete with their hao lien Versace suits, Tag Heuer watches and overseas-educated accented English. WTF!? 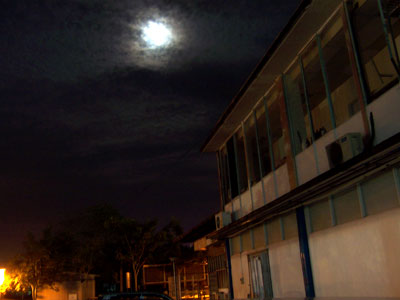 The hospital turns into a spooky place at night

Staying at the hospital wasn’t that bad. Things only go bad at night because when you’re surrounded by sick people your mind starts playing tricks on you. Even normal things like an taking a lift becomes spooky.
I had the misfortune of riding a lift at 4am in the morning. It stopped at Level 4 and when it opened its door and no one was around. Normally I’d just be pissed off but when it happened last night I was so scared I hugged my balls for protection.
I like the picture of this corridor. It shows how quiet the ward was at night.

What? Is there something wrong with this pic?

Regardless, I’m sure glad this little ordeal is over. My father was discharged this morning and I finally get to sleep at my own bed for a change. Best of all, I’m finally re-united with my computer.
Now if you’ll excuse me I think I need a well-deserved sleep. 🙂