7 Days Left.
This time next week I shall leave Perth for good.
Nicole arrived two days ago. We have this much time to spend together before we leave each other, not knowing when we will meet again.
People often ask me, “Kenny, are you sure this is what you wanted to do?”
I gave them a very simple answer, “I have only one father.”
*~*~*~*~*~*
The year was 2003. Arnold became the Governator of California. The planet Mars became visible on our skies. The SARS virus hit most of Asia, causing thousands of deaths. Meanwhile, fashion trendsetters in Hong Kong released… Hello Kitty face masks! On a more serious note, Mahathir stepped down as the Prime Minister of Malaysia. Love him or hate him, everyone have to agree that he had made an amazing impact during his term. 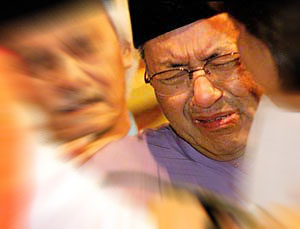 Don’t cry for me, Malaysia…

On 20th March, George W Bush showed the world how powerless the UN is, and led the Coalition of the Killing to drop bombs over Baghdad, starting The Gulf War – Episode II. The entire world was in killing mode. On 13th December, Saddam Hussein was captured from his “Spider Hole”. By then, everyone seemed to have forgotten why the war started in the first place. The Weapons of Mass Destruction were yet to be found, but none of the big wigs seemed to care because they all think they are doing a good job by democracizing Iraq. 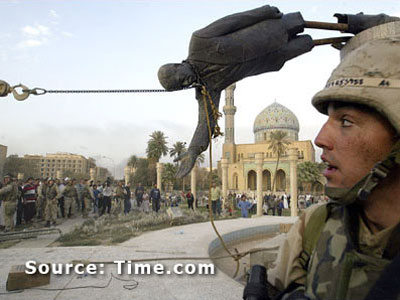 Saddam Hussein’s statue toppled in April 2003. Saddam Hussein himself was captured in December 2003. Still no signs of WMD.

2003 was easily the best year I had in Perth. I was 21 years old and I was about to start my fifth and final year at Curtin University.
Dating a KL girl is both good and bad. The good thing was that I started to pay more attention trying to look good. The bad thing was that as a result, I started spending A LOT of money buying plenty of designer clothes unnecessarily. Suddenly, I realised how fun it was to buy my own clothes. I discovered the world of Retail Therapy. Slowly but surely, I turned into a brand bitch, and I didn’t even realise it myself! Spending every cent of my bank account balance instead of putting money towards savings is a very bad habit and its not something I’m proud of.
I had saved up a lot of money from all that tutoring the year before. Curtin students (in fact, all uni students) always had the bad habit of doing last minute cramming for their exams. So what happened usually was – when they found out that there’s so much stuff to study, they panic. And when they panic, they call Kenny. And when they call Kenny, Kenny got rich. 🙂 It wasn’t easy though, because in between studying for my own exams, I had to make sure that my students are prepared for their papers as well. 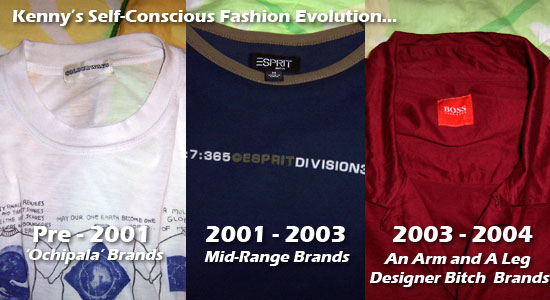 From thrifty, to affordable, to brand bitch.

Regardless, I had saved up about AUD$1,000 by the end of the year. The exchange rate at the start of 2003 was AUD$1 to RM2.60 – and that’s more than enough for me. I stopped by KL with Nicole before I depart for Perth, and we spent so much money we almost bought the KLCC twin towers. Whilst previously I could only afford to buy some “ochipala” RM20 clothes from Sungai Wang plaza, this time round I had no regrets splurging up to RM80 on a pair of Calvin Klein underwear. I told my mom that, and she said “Your kacheng made of gold one is it?”
Anyway, 2003 was the year Nicole transformed for the better. With my encouragement, she was elected as the Deputy Convenor of the International Students Committee. Her circle of friends expanded, she became less dependant on me, and generally Nicole just became a much happier person compared to the way she was the year before. I was definitely happy for her. As my own group of friends slowly left Perth, I started hanging out with her group of friends more and more – which was how I started knowing people like Jacky, Tiffy, Dine & David, Jamie & Angeline, Candice & Steiner, etc. 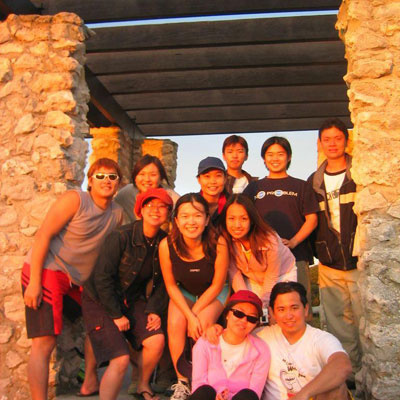 Nicole moved out of my place soon and started staying with Candice in King’s Park. It was a good change for the both of us. She became more disciplined. My mother and Nicole found a common ground and they became friends again. World War 3 ended and I couldn’t be happier. 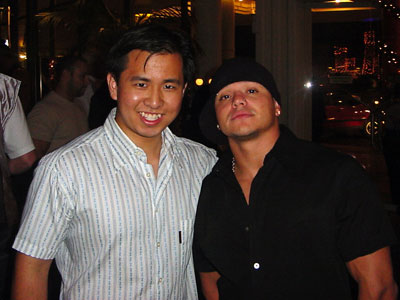 Kenny and Rey Mysterio Jr during the WWE Smackdown Tour 2003

Life was cruising for me in 2003. It was easily one of the most carefree life I had during my time in Perth. I was in the world of my own with my family and Nicole. My nephew Jayden was born. I watched Craig David in concert. I hung out with my favourite WWE wrestlers when they toured Perth. I even get to travel to eastern Australia, Shanghai and exotic places like Seoul. Instead of tutoring high school students, I started tutoring Business Statistics 101 to rich international students at Uni, and that allowed me to fetch up to $30 an hour.
University work wasn’t too bad, except for my final year Engineering thesis. Being a smart ass that I thought I was, I chose a rather difficult topic for my final year thesis that involved both Physics and Engineering Departments.
I had a supervisor from each department. The Physics supervisor was coincidentally the Head of School of Physics. He was largely dissatisfied with my work and often criticised me for not being scientific enough. The Engineering supervisor on the other hand had absolutely no idea what I was doing in the Physics department, so as long as I appeared confident, anything I said to him that sounded correct, will be correct! But then I figured it out… since this is an Engineering thesis, regardless on how atrocious my Physics supervisor think my work is, only my Engineering supervisor will be marking it bah! 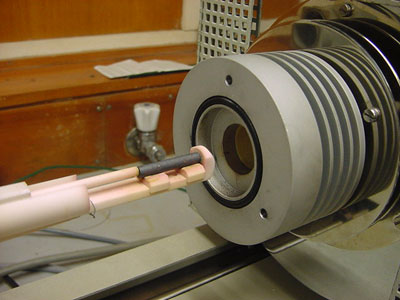 Meausirng the thermal expansion of materials. Fascinating piece of bullcrap.

Honestly speaking, I had absolutely no idea what I was writing in my thesis – I was sure it wasn’t something my Physics supervisor would approve of. 🙂 All I remembered was that I praised my Engineering supervisor like he was the Sultan of Brunei in the Acknowledgement section. I submitted my thesis… and in the end, I received a whooping 87% for a pile of professional bullcrap!
I must be a genius. 😉
As if that’s not enough, things continue to go uphill from there. I had the last Uni exam paper of my entire life on the 6th November. Then I received a phone call – Spectra decided to offer me a job as a Software Engineer, and that I shall start work on the 13th November 2003! Needless to say, I took up the offer, and that’s where I worked until today.
*~*~*~*~*~*
I was young, fit and able. I had my finance, my career, my family and my love life all sorted out. I was on top of the world, and life couldn’t be better.
But its exactly when you started thinking that way, life throws you a curve ball, and your whole world starts crumbling around you.
I was on top of the mountain in 2003.
The following year, my mountain crumbled.