So here I am at 7am in the morning for another late shift for the fourth night in the row. Fourth night that my father is in a half-conscious state. The good thing is, the rest of my family has more or less recovered from their respective illnesses and are therefore able to lift the burden off my shoulders a little. The bad thing is, my body clock is so fucking screwed up I think I need to send myself to the watch repair shop. 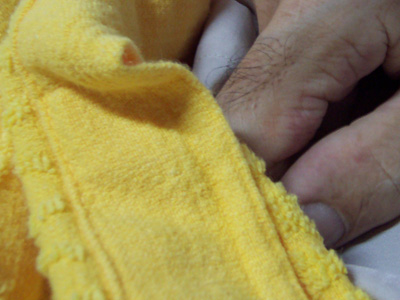 My old man is still holding on

The only reason I’m doing the late night shift is because I’m unable sleep the normal hours anymore after four days of sleeping at 8am and waking up at 3pm. Funny. Last time I did that was after a drunken night out partying at the Varga Lounge back in Perth. 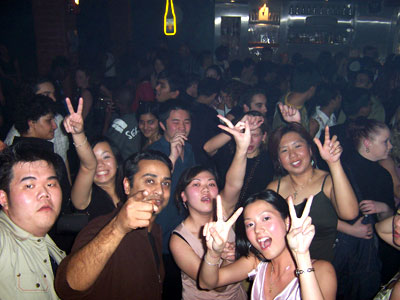 I think this was more fun.

I went through my father’s old photo album today.

Its always interesting to do something like that. Seriously, there’s nothing like watching your own parents sporting some horrendously bad fashion that would make you cringe if someone were to wear the same thing today.

It is a very cliche thing for our parents to say to us “In our days, we didn’t have it so easy…” But in my father’s case, I totally believe him. 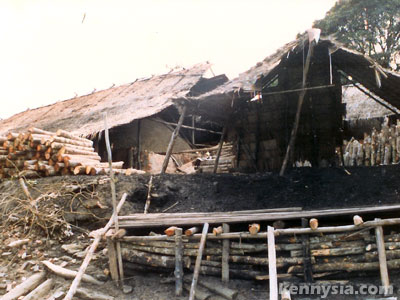 In the early 50s, there’s a small Malay kampung near Kuching called Kampung Penambai. Six families were living in this kampung, and the Sia family was the only Chinese one there. My grandparents worked for a charcoal company for long hours but got paid very little. If it weren’t for circumstances that forced my father to move to Kuching, hey, I might be still typing this entry from a shack in Kampung Penambai.

In amongst his siblings, my father, being the eldest, was the de facto leader of the house. As feared as he was, he genuinely cared for his siblings and provided them with opportunities they never thought they could have. Even 50 years later today, he is still seen as a great leader in many people’s eyes. 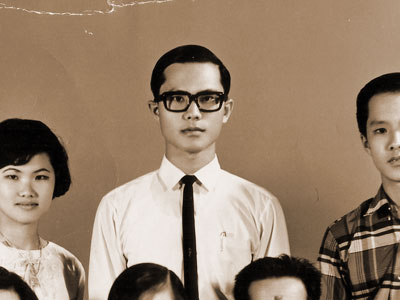 Pa, how come you’re using your belt for a necktie?

There weren’t any Chinese schools in Kampung Penambai. In order to receive his primary school education, my father would have to travel down to Kuching on a little sampan boat – the only possible way to get to Kuching then. It would take 4 hours to get to Kuching on a good day, and up to 8 hours on a bad day. My father had spent a good part of the year away from his family whilst he stayed with his aunt in Kuching. The only time he was able to reunite with his family was during school holidays, where my grandmother would cook sumptous feast to welcome my father back. 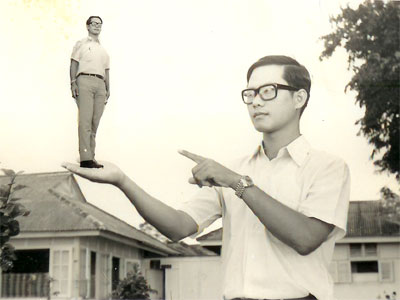 My father holding a miniature version of himself. In those days they don’t have Photoshop, so…

It is very characteristic of my father to be hardworking. In the mid-60s, his mother (my grandmother) and younger sisters were working tirelessly at the rubber plantation supporting their family and giving my father money for his education. To alleviate their burden, my father in his spare time would work as a tutor (where I got my tutoring genes!) and as a construction labourer.

There were fringe benefits though. The constuction job got him a six-pack and a tan body, whereas the tutoring job got him my mother. 🙂 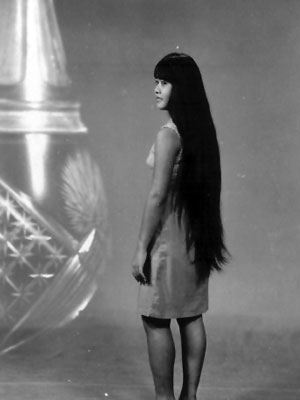 In those days, toilet paper was kinda expensive. Having a long hair had more uses than you think. 😉

My father managed to get himself into all the good schools growing up and he was always scoring number one in his class. At the end of his secondary education in 1971, he was presented with an opportunity to study overseas – a privilege at the time. As tempted as he was with that offer, he turned it down, knowing that the cost of him leaving home would be unbearable for the family. 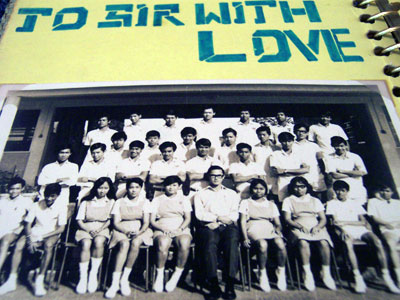 My father, at my age, was a high school teacher.

His first professional job out of school was as a teacher for a year – where one of his students ended up as his business partner today. Then for the next nine years he worked as a salesperson for ICI Paints and a aluminium company. In addition to that, he was also selling general insurance on the side. 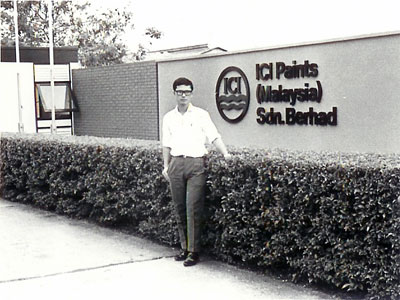 An ICI Paints photo in black and white. Oh, the irony…

My father was still dating my mother then. I was told that my mother was his first lover and vice versa. 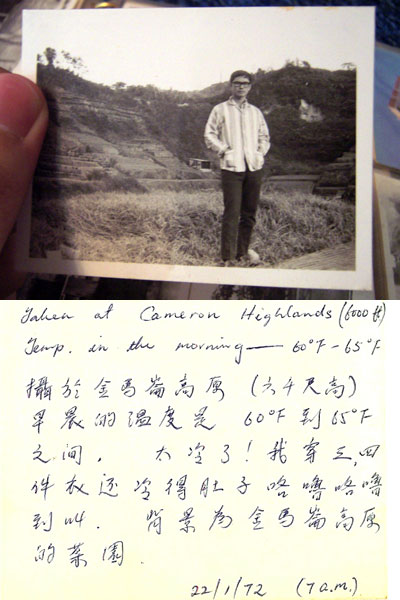 This is from a set of photos he sent to my mother when he was working with ICI Paints in West Malaysia. My father has really nice handwriting. That’s one thing I didn’t inherit from him. 🙁

My father was significantly poorer than my mother’s family back then. My mom told me once they went to the cinemas together. They walked to the cinema’s candy store, and my father asked her what she wanted. My mother happily pointed out the Horlicks candy which costed very little. Being tight-on-budget he hesitated and tried to persuade her to buy something else. But my mother didn’t take it kindly so she ended up pulling a long face for the rest of the evening. I thought was silly, ‘cos now my father would have bought her a swimming pool filled with Horlicks candies if he wanted to. 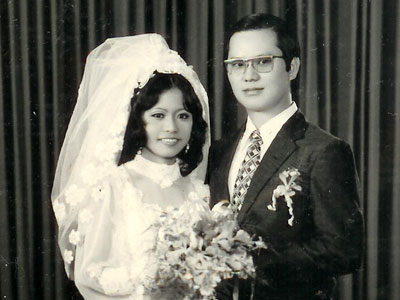 In those days, they didn’t have Inspiration Alan Salon to do my dad’s hair.

My parents got engaged in 1973 and 2 years later, he married my mother. I thought my mother looked so pretty in this picture. For some reason I didn’t find her as pretty when she yelled at me for not cleaning up my bedroom. Hmm… 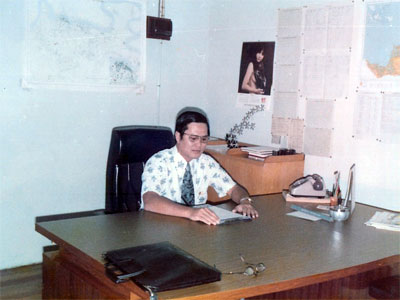 In those days, they don’t have Internet so you can’t slack off at work reading blogs.

In 1978, my father took a huge risk by mortgaging his house, his car, borrowed a huge sum of money from the bank ot start his own company. I shall not disclose the name and nature of the company and all that. But it was the best move he has ever made. The rest as they say, is history.

The company boomed throughout the 80s and 90s, and he created hundreds of jobs for the people of Kuching. His employees loyalty to him is undeniably his strongest asset. As a matter of fact, his first employee is still working for him even until today. 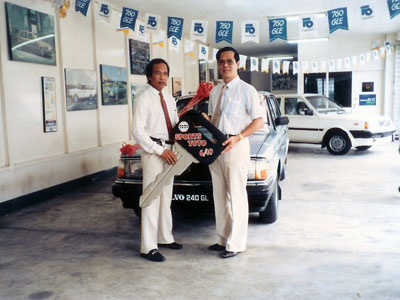 I’m born in 1982, and growing up I hate to admit that my time spent with him was little. My father was a self-confessed and true workaholic. He’s so passionate about his line of work, its almost as if his company is his other family. Whilst other people work 9 to 5, my worked 9 to 12 – that’s 12am, not 12pm. The only time we get to spend the full day with him was on Sundays. In the early days, my father had to travel to many ulu-ulu places to find business

That does not mean that he neglects his family or anything like that. On the contrary, we know from the things he did for us, that we’re the most important part of his life.

Perhaps my fondest memory of him was when I was in Secondary 3. Exams are coming and every night I’d be in the living room “memorising” my books and notes till 2 or 3am in the morning. My father saw what I was going through. Every night, he’d buy me kolo mee from KY Cafe for supper, ensuring I don’t starve myself late into the night, and also ensuring both my brains and my guts grow large. 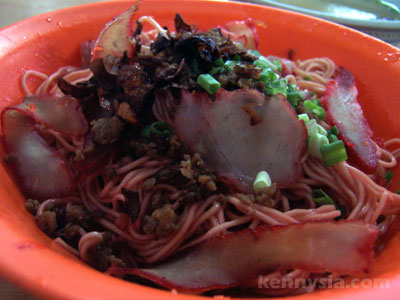 This is what got me through my Secondary 3 examination

I swear to you that’s the best tasting kolo mee I’ve ever had. That’s only because once upon a time, my father personally bought it for me in my time of need. Thank you, dad.

43 Replies to “Black and White Photos”