I am issuing an open challenge to all bloggers based in Penang. 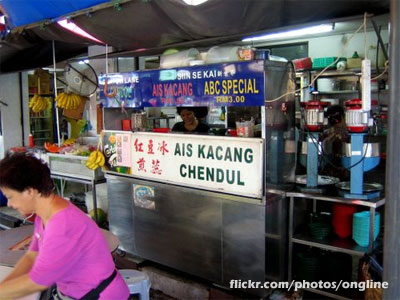 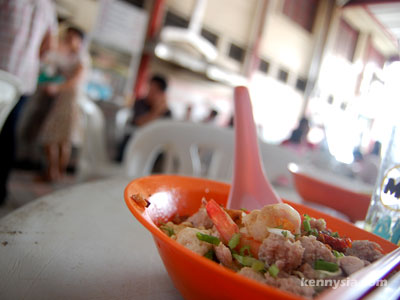 A while back, I revealed my choices for what I think are the best of the best you will find in Kuching. These are food that us locals here crave for. They are so good, Kuching people here have no hesitation travelling 7 miles out of town just to get to that coffee shop to drink that authentic cup of Teh-C-Special.
So, I wanna know your Penang equivalent. I wanna see your version of the Penang Food Awards. The challenge to all you Penang khia is this.
Where can I find the BEST OF THE BEST Penang food? 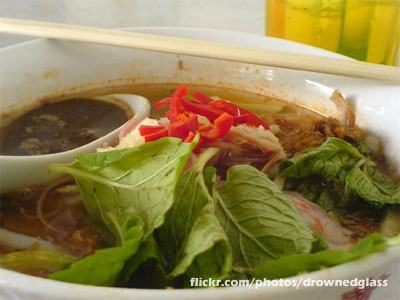 I’m talking about your best Assam Laksa. I’m talking about your best Penang Char Kueh Teow. I’m talking about your best Nasi Kandar. Preferably complete with pictures and maybe some directions on how to get there.
You can post your choices for our very own Penang Food Awards and whore your blog links in my comment section as much as you want. Closing date is one week from now. I’ll look through all your recommendations and the one with the best guide to Penang food wins.
I can’t do much in terms of prizes though. Unless the Penang Tourism Board can cough up something, the winning blogger will get a Blog Plug of the Day from me and a one month text link on kennysia.com. Hey, it’s better than nothing. 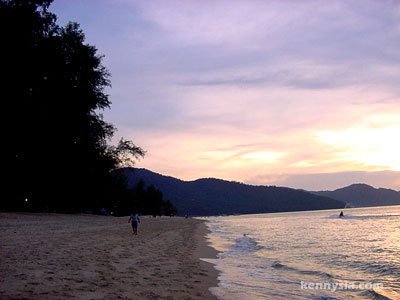 Of course lah, there is an ulterior motive behind this. 😉
See, I’m flying off to Penang the coming Saturday. Joo Nee, one of the finalists in reality TV show Nescafe Kickstart Season 3 has decided to fly me down to make an appearance at the opening launch party of her dance studio Let’s Dance! 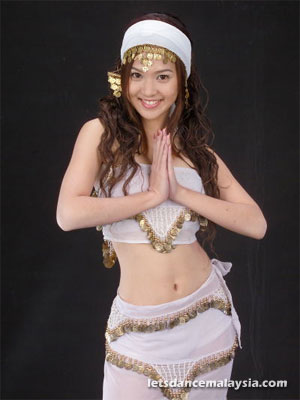 What Captain Jack Sparrow would look like if he were a female.

If you wanna say hi and lend your support to Penang’s own dancing diva, we’ll be there 8pm – 12midnight, Saturday 10th February on Level 28, Northam Tower A. Be sure to register through their website as places are limited. 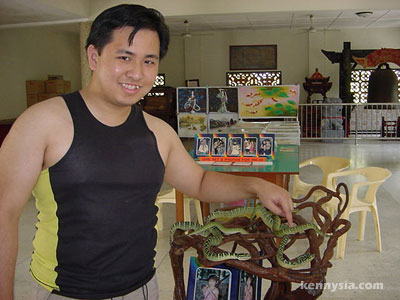 This won’t be my first time to Penang. I’ve been to Batu Ferringhi and Kek Lok Si temple before, so I’m not interested in tourist attractions like those. After the opening launch party, I’m gonna make full use of my time in Penang to sample the legendary range of Penang food, and perhaps check out the nightlife there a little. Some suggestions from the locals would be nice.
So Penang people here’s your chance. I’ve shown you what Kuching has, so now it’s your turn to show me what you’ve got. 🙂

END_OF_DOCUMENT_TOKEN_TO_BE_REPLACED

Find the best deals on new digital cameras for all ages! Get customer ratings and professional price comparison before you buy. Learn how 1001 uses for digital cameras that will keep you busy for hours.  Also find great deals on digital camera accessories to go along with your new camera. Check out this great comprehensive guide to taking great digital pictures to capture your memories.

I’ve been having a string of bad lucks when it comes to digital cameras. 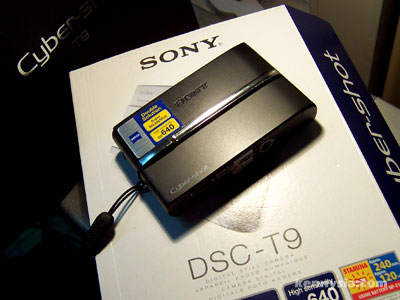 First, I had my one-year-old pocket-sized Sony T9 stolen. At least I thought it was stolen.
Actually I had carelessly misplaced the camera and couldn’t find it for a month. By the time I found it, I had already stupidly forked out cash for a Sony T10 to replace it. D’oh! So I ended up having two similar Sony cameras side by side.
I had plans to sell off my old T9, but then my brand new Sony T10 was stolen. 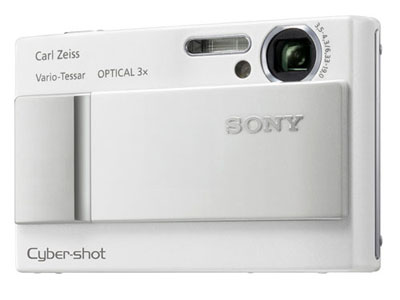 It was New Year’s Eve and I was out partying in crowded places. My camera was clipped on to my belt. One moment I was happily snapping photos of my buddies, next moment, it was gone. 🙁
It sucks bad enough that your camera is stolen. but when your 2-month-old baby is stolen – damn, that sucks even worse than an Electrolux vacuum cleaner. 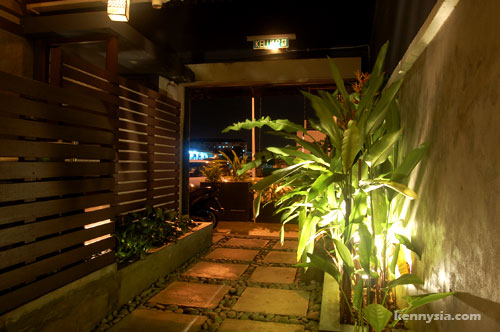 I couldn’t get over the fact that I lost a new camera. My impulse told me to immediately get another Sony T10 to fix my broken heart. But then I have a slim camera in my arsenal already, so why add another similar one to it?
After a bit of research, I decided to spend a bit more to jack up my weapon to a larger digital SLR instead. 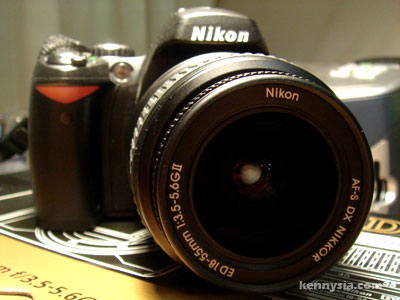 This is the Nikon D40 dSLR camera I bought for myself a few weeks ago.
I went for a Nikon because almost everyone I know who are serious about their photography uses a Nikon. Even the people who depends on their camera to fed them like Joyce Wong, Kid Chan, and Alvin Leong all shoot with a Nikon. 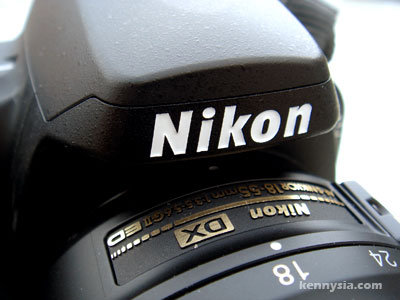 The camera isn’t yet available in Kuching. I got mine from a shop at Sungai Wang Plaza in KL, and even then many shops there have already sold out the Nikon D40. Some even jacked up their prices unreasonably high just to piss potential customers off. Dammit I hate people like that.
There’s a reason for this camera’s popularity. The Nikon D40 is the smallest and lightest digital SLR camera on the market. It is also the most affordable, which is good for cheapskates like me. 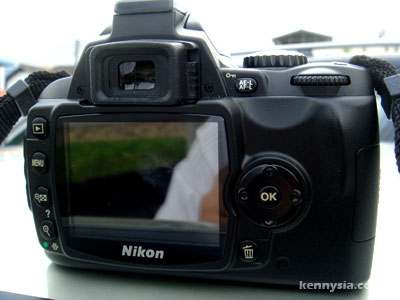 Previously, if you want a dSLR you gotta be prepared to pay a starting price of around RM3,000. The Nikon D40 comes with a price tag of less than RM2,200 and comes bundled with a camera bag and a 1GB SD card. 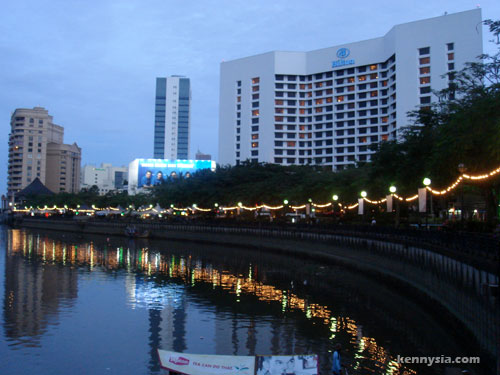 Look at how good the camera is. This shot is taken with a Sony T9.
Compare that with a similar shot taken blow with the Nikon D40. 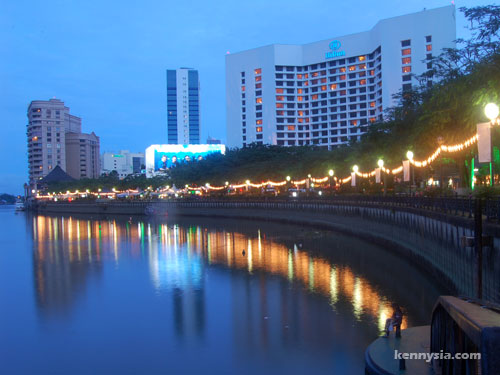 There’s really no comparison between the two. The dSLR is in a whole different league of its own. Image quality-wise, the Nikon D40 is leaps and bounds ahead of any camera I have ever owned.
I especially like its ability to focus so quick and so good. 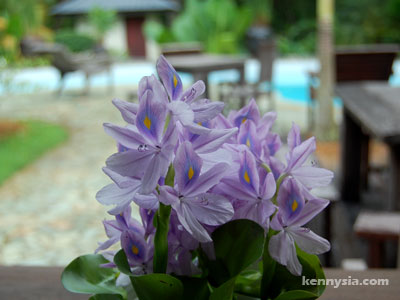 On the downside, the Nikon D40 is so freaking humungous that I cannot possibly carry it around everywhere I go. 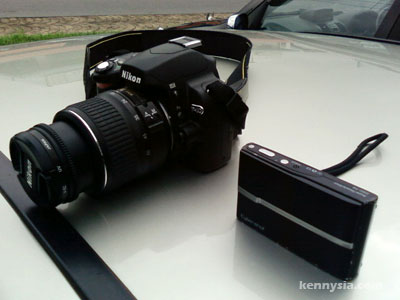 Where am I gonna hide this camera, man? In my pocket?
Still, I’m taking this baby whenever I can and learning it slowly. Right now, there are too many manual controls that a casual photographer like me are clueless of and would have to take time to figure out.
What “shutter speed” what “aperature priority”? I catch no ball. 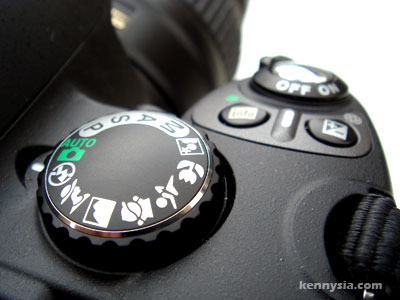 It’s an expensive hobby lah, this whole photography thing. I don’t even have aspirations to be a professional photographer. I just wanna take better pictures than I currently do.
The good this about having a SLR is that when my photography skillz go from n00b to l33t, the option to upgrade the camera is there. 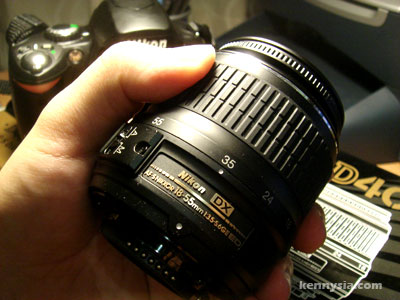 I can even zhng my camera with different types of lens!
Here are a few more reasons why an SLR camera kicks bigger arse than a normal digital camera.
1. An SLR camera takes a lot better pictures. 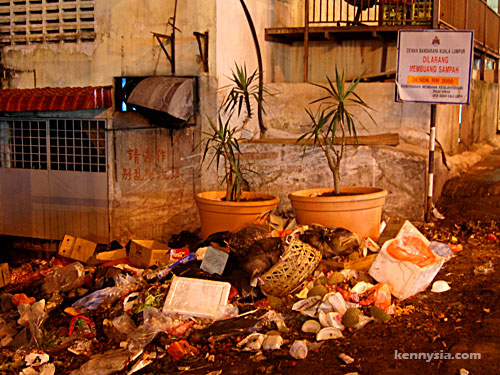 In Malaysia, ‘Dilarang Membuang Sampah’ means ‘You’re welcome to chuck your rubbish here anyhow you like’

Even a rubbish dump looks good when it’s taken with an SLR camera.
You don’t see professional photographers for magazines or weddings going around snapping photos with pissy Sony T10s. They all use big black cameras. The BIGGER the camera, the BETTER. And if you’re not using your BIG camera to take pictures, you can always use it to hit people. 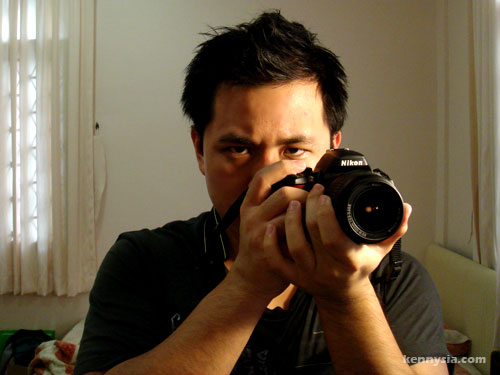 And chicks are gonna dig you.
Why? Because an SLR camera is big. And chicks dig guys who carry around a big equipment.

3. You can go to concerts or events for free by dressing up as a reporter. 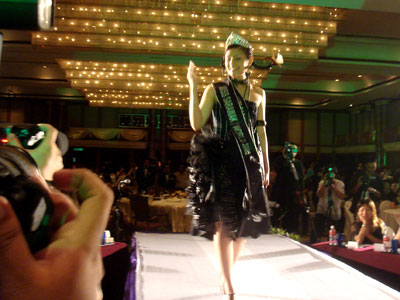 The security aren’t gonna know diddly squat about cameras. They’ll just think people who hold small cameras are fanboys trying to harrass the celebrities and those who hold big cameras are reporters trying to do their jobs. Instead of getting chased away by angry burly men, you can sneak into the restricted zones and take up-close photos of the celebrities as much as you like. After all, you’re just a reporter “doing your job”, right? 😉 Hur hur hur.
(Disclaimer: kennysia.com does not encourage sneaking into concerts. Please seek your mommy’s permission before you do so. kennysia.com will not be held liable for any damages, including damages done to your face when you’re caught by security)

4. Finally, your subjects are happier if you take pictures of them with an SLR camera.
Last time, if you use a normal camera to shoot them, they would say NO. 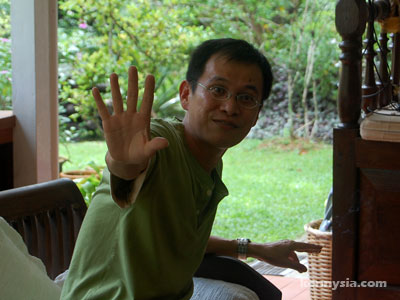 Now, if you use an SLR camera to shoot them, they pose for you! 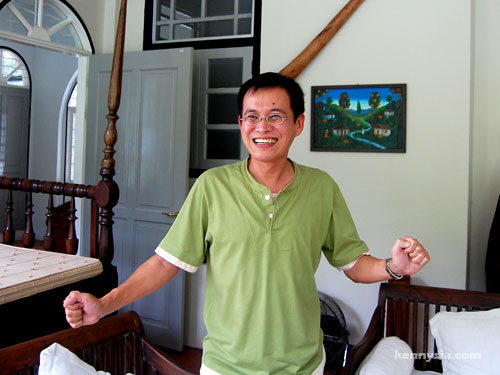 Such is the power of a dSLR camera.